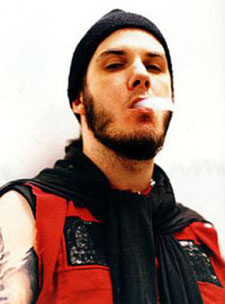 Weed is an awesome so-called “drug”, but it’s NOT for everyone. And throughout certain periods of my life, it’s been that way for me too. Growing up it was fun and my friends and i smoked a whole lot (!) whilst jamming…but somewhere in my mid-twenties, it would/could make me paranoid and uncomfortable in my own skin, so I didn’t/wouldn’t partake as often.

Today, it treats me juuuust fine though… and in truth, it helps my job.

Call it strange, but I can “hear” music better after I’ve smoked. Detail that I wouldn’t have perhaps noticed jumps to attention…maybe my mood is “altered” enough to actually listen!!!!  Ha!  Especially if it’s new music, HOUSECORE records submissions, or something new or different I’m being turned onto.  I’ve gotta listen CLOSE.  I owe it to the bands!

Grass also helps one of the side effects I suffer from post-back surgery…there’s some burning nerve damage that shoots down to my left foot. When I smoke, the muscles surrounding the compromised joints/nerve endings (too) relax, and I feel a great deal of relief. Maybe it’s all in my head, but I doubt it. I know pain very, very well, so if there’s any indication of relief, I KNOW it.

Also, I find the older I get, the more I’m becoming a night-time smoker.  If I smoke too early in the day it can be a bit much!!! Smoking later in the day takes the edge off without having to resort to taking a “sip” (aka drinking a beer or wine), and that’s a good thing for me.

Weed WORKS for me…and like I stated already, it ain’t for everyone.

If it fucks with a person’s ability to do their job, or is somehow holding them back in the fight to become a better person, then hopefully that person has common knowledge enough to know that weed isn’t for them. Because the results of being a non-effective, non-productive person AND a weed-head is a recipe for a long, unfulfilled, dull life.

And it creates the not-so-realistic view of what a pot-head really is. Being “only” a pot-head is no way to get LIFE done. WE are responsible for every action that is put in motion in our lives, so smoking responsibly goes hand-in-hand with that PHILosophy!!! Ho Ho!

As far as the legalizing-side of weed goes, you know I’m all for it. But once again, it’s up to individuals to decide if it’s for them or not. People can pull up as many graphs and/or stats as they want when it comes to weed vs. alcohol, and, of course, weed will ALWAYS pale in comparison to the dangers alcohol presents, especially in a pro-weed statement(s). But I’ll never forget the time when I was 15-years old and my friend was driving and we were both high. He was cruising about 50 mph and there was a red light directly ahead with cars stopped 4-deep. He was baked, his mind was drifting and there was no way in hell he was gonna stop if I hadn’t grabbed him and shook him. He slammed on the brakes and truthfully, it’s amazing we didn’t wreck directly into the car(s) in front of us or fly through the windshield. All I could think was, “What if I hadn’t been in the car with him?”… scary thought, really.

So, if you’re a smoker like me, we have to maintain responsibility in order to restore some face to a subject/habit directly linked to (A) harder, more dangerous drugs (a subject I know that YOU know I know all too well!!), and (B) a lazed, unambitious disposition plaguing younger generations. The world is one extremely huge OPPORTUNITY…so if you smoke, get something positive done (!) instead of laying around waiting for the pizza-guy to show up!

Get off your asses and start a band! Draw a masterpiece! Or just be the best parent you can! (YES!!! Some of the greatest parents EVER smoke!)

Whatever you choose, DO the best to BE the best at something, as long as it’s positive.

Smokers of the world unite!  Let weed push us creatively and soothe us medically!

Corey Mitchell is a best-selling author of several true crime books and needs to figure out some way to unwind after a long day. Hmmmm…..

Metal Sucks Greatest Hits
0 -
Meet Ironbunny, the New Babymetal
930 -
The Austerity Program’s Justin Foley and the Search for the GREATEST TACO RIFF OF ALL TIME
880 -
The Looks That Kill: God Forbid’s Doc Coyle on the Role of Image in Music
0 -
Twelve Reasons Babymetal are the Single Best Thing to Happen to Metal in the Past Decade
180 -
BETTY WHITE: “HAPPY MOTHER’S DAY, MOTHERF*CKERS!”
0 -
Video: A Young Mr. Bungle Play Their High School Talent Show