Happy Back to the Future Day! Here are Seven Moments in Metal We’d Go Back in Time and Erase

Hey, everyone, happy Back to the Future day. As some of you know because you have the Internet, and which I know because I’m some squamous boffin, today is the day that Doc Brown and Marty McFly arrive in the future in Back to the Future II. And while you can complain all you want about not having hoverboards or getting to see Jaw 19, maybe take a moment between typing on your info box and checking the instant communication bubbles on your phone shard and thank God you’re living in the fucking future.

But when it comes to time travel, the future doesn’t concern us. We’re cool with seeing metal music’s destiny unfold gradually before us like the slowly-hardening dick of an elephant. It’s the past we’re concerned with. If we had Doc’s DeLorean, we’d crank that sucker up to 88mph and head back to the past to change the metal world as we know it, hopefully for the better. Here, for your reading pleasure, is a list of moments we would happily go back in time and change.

1. The death of Cliff Burton

The most obvious stop on our time travel loop would be Kronoberg County, Sweden, at 6:55am on September 27th, 1986. We’d wave down the driver of Metallica’s tour bus and let him know there’s some black ice ahead, and warn him to either get some sleep or be extremely careful.

The thing about Cliff Burton’s death is that it had no upside or silver lining whatsoever. For example, if you went back and made Bruce Dickinson stick it out with Iron Maiden in the ’90s, you might lose some of Maiden’s recent ragers. But Burton’s passing did nothing more than rob Metallica of a vital influence and throw the band members into despair, addiction, and denial. Who knows what could’ve happened had Burton survived.

2. The making of the “Nookie” video

Next stop, 1999, to the set of Limp Bizkit’s music video for “Nookie.” We’d cut the power, destroy the equipment, and load Fred Durst into a car — only unlike in the video, we wouldn’t faux-arrest him, we’d brainwash him to believe he was a Guatemalan silverware salesman and ship him out of the country, never to be heard from again. Se llama ‘Jorge,’ Señor Durst. ¡SE LLAMA JORGE!

Interestingly enough, stopping the song “Nookie” from being recorded isn’t a priority for me. The song was just another dumb jock jam. It was the video, with its forced urbanism and khaki-and-red-hat gang mentality, that inspired a legion of dickheads to act like the hardest motherfuckers in their cul-de-sac. That’s the tumor that needs to be cut out of time.

3. The murder of Dimebag Darrell

December 8th, 2004, the Alrosa Villa in Columbus. Excuse me, sir, hate to bother you, but you see that big Marine-looking dude with the eyes that could melt stone? He’s got a gun, and he’s going to hurt people. Don’t ask me how I know, just get him. And watch the windows too, he seems like the type to want to sneak back in.

That’s one of the saddest parts about Dimebag’s murder–it could’ve been so easily avoided, if only anyone had known. Now, we’re left to wonder what might have been. Just remember, any time you feel put upon for having to be frisked at a show, it’s because of this.

Late 2001, early 2002. Imagine, guys, a world in which Ozzy was still more rock star than celebrity. A world where Sharon hadn’t been turned into the most valuable member of the Osbourne clan. A world where every horrid family didn’t get their own reality show. Picture it. It might have happened, if not for The Osbournes.

Ever gone back and watched The Osbournes? Painful and infuriating. A bunch of rude, snotty jerks in awful nu-metal inspired outfits surrounding a dottering patriarch. Then again, if the show hadn’t aired, we’d have lost…what? Kelly Osbourne’s fashion commentary? Blecch. Fire up the flux capacitor.

2011. While I’m sure Randy and the guys have long since recognized whatever bright side there may be of Randy’s getting arrested and tried for manslaughter in the Czech Republic, I’d still want to swoop in and help them out. I’m sure they’d be much happier having not lost months of their lives to this shitshow.

The problem is, Randy did what any musician would do in his situation following the aforementioned murder of Dimebag. It wasn’t his fault that this poor kid died. So maybe it’d be about calling in a bomb threat or something and getting them to cancel the show entirely, or getting Nosek too drunk to attend. Either way, we’d happily take on the burden. 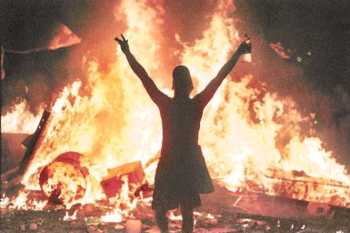 Rome, NY, July 22-25, 1999. Ever wonder why America has such a weird history with huge multi-day festivals? Look no further than Woodstock ’99, a three-day shitshow of violence, rape, and arson where the best and brightest of the 20th Century’s finale revealed what a bunch of repulsive psychopaths they really were.

It’s simple, really — 1999 was too far out from grunge and alternative’s more sensitive aspects to work the way Woodstock ’94 had. ’99 was a year of angry suburban bros doing ecstasy, not peace and love. We’d cut the power, cancel the Chili Peppers’ flights, whatever it took. This nonsense should’ve been canceled years before it came about.

Early 1996. Is there anything we could have done? I know I would try.

Also includes System of a Down, Metallica, Megadeth, Alice in Chains, and more.

Drummer Lars Ulrich says the band have been writing during the pandemic, but the going is slow.

He discusses the band's new album, 'Too Mean to Die,'…

Metal Sucks Greatest Hits
0 -
Which Bands are “The Big Four of Death Metal”???
0 -
BREAKING: Ex-Suffokate Vocalist Ricky Hoover Successfully Undergoes Earlobe Reconstructive Surgery
0 -
Watch an Old Lady Rock Out to AC/DC’s “Highway to Hell”
0 -
Review: Megadeth’s Super Collider is a Super Catastrophe
0 -
Why are metal fans hopelessly stuck in the past??? :(
0 -
It’s Official: There is Too Much Slayer Merchandise