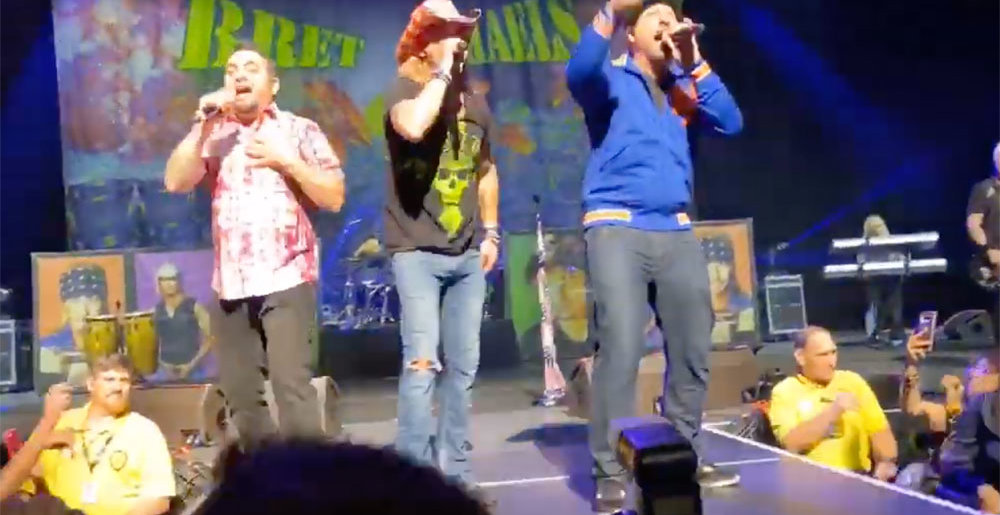 I remember the exact moment I realized Poison were bullshit. It was in 2014 or 2015 (I know, I know… late! I was naive, ok?) on Mötley Crüe’s original farewell tour at the Nassau Coliseum in Long Island. Poison opened the show, which began innocently enough, but after the first song the backdrop was pulled down to reveal another backdrop featuring the band’s four members, all clearly shot separately, Photoshopped in and airbrushed to hell, and a shirtless Bret Michaels. It struck me like a ton of bricks that Poison were essentially a boy band dressed up in metal garb, and I haven’t been able to unsee it since. My innocence, gone!

I bring this up now because it makes complete sense that Michaels would collaborate with an actual boy band, NSYNC, which is what happened at his show in Florida last Friday, December 13. The wig-wearing singer was joined on stage by Joey Fatone and Chris Kirkpatrick for a special rendition of Poison’s hit song “Nothin’ But a Good Time,” and if you’re interested in watching fan-filmed video you can do that below, although I’m not sure why you’d want to other than to satisfy your morbid curiosity.

Poison will open for Mötley Crüe again next summer, along with Def Leppard and Joan Jett & The Blackhearts. Dates:

Metal Sucks Greatest Hits
0 -
Report: “The Number of Heavy Metal Bands in a Given Country is Associated with its Wealth and Affluence”
0 -
Listen: Every Dillinger Escape Plan Song Played At Once
0 -
Elvira Defends Rob Zombie’s Munsters Casting: “Sheri Is Freaking Adorable as Lily Munster”
0 -
Chad Kroeger and Avril Lavigne Finally Wrote a Song So Awful that the Internet Has Collectively Rejected It
0 -
Advanced Discrimination & Dragons: A Critical Look at Varg Vikernes’ Myfarog RPG
0 -
The Best Metal Albums of 2013, As Chosen by Metal Musicians Themselves — Part I: Machine Head’s Robb Flynn