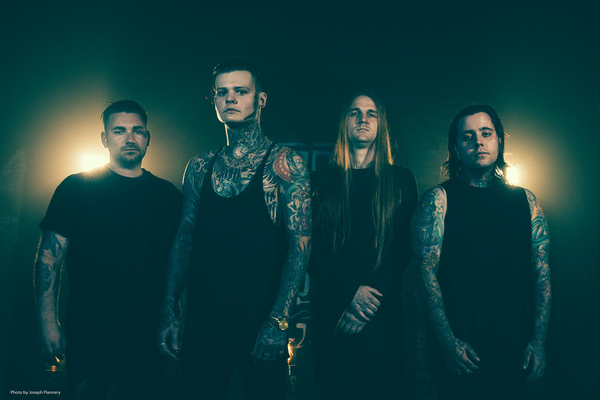 Last month, Lorna Shore fired their vocalist, CJ McCreery, following multiple allegations of abuse and racism against the frontman. And while there’s never a “good time” to learn that a member of your band is a prick, the timing, in this case, was especially bad, because the band’s Century Media debut, Immortal, was scheduled for release on January 31.

Many people understandably assumed the album would either be scrapped entirely or delayed while the vocals were re-recorded (and, possibly, while the lyrics were re-written) with someone else… but then, last week, the band and Century announced that they’d be releasing the album this month as planned.

Fans have been split about the announcement, for a number of reasons. For one thing, the simple act of listening to McCreery’s voice now rubbed some of us the wrong way. For another thing, McCreery may or may not be owed royalties for sales of the record, depending on whether or not he actually wrote any lyrics or melodies for the song, and what legal arrangement he had reached with the band before joining (if he was purely a hired gun brought in to scream material the rest of the band wrote, he may not get a penny).

Conversely, the band and Century are not responsible for McCreery’s behavior, and it’s somewhat “unfair” that they have to throw away the album because of the actions of one asshole — it would mean not only discarding a great deal of work, but taking a tremendous financial loss as well (while it likely wouldn’t be that expensive to re-record McCreery’s parts, there can be no doubt that Century had already sunk tens of thousands of dollars into manufacturing physical copies of the album, to say nothing of what promotional costs the label had already expended by the time McCreery’s grossness came to light)…

…but also, life isn’t fair, and what happened to McCreery’s victims wasn’t fair, and so using the “It wasn’t the band’s fault and it’s not fair that they should be punished” argument is also plenty problematic.

So now we pose the question to you, MetalSucks readers: is the decision to release Immortal as is the right one? Or should the band and the label have accepted the loss? Vote below.

Metal Sucks Greatest Hits
0 -
BREAKING: Slipknot Guitarist Mick Thomson Stabbed in the Head by Brother
0 -
So As it Turns Out, Banging Your Head a Bunch Can Be Bad for Your Brain
220 -
Hey Guys, Did You Know That Virgin Steele are From Long Island?
0 -
Twenty Photos of Mitch Lucker’s Last Days, Taken From His Instagram Account
1220 -
MetalSucks Exclusive: One Year Later, Peter Steele’s People Speak About His Life, His Music, and His Last Days
0 -
Which Bands are “The Big Four of Death Metal”???