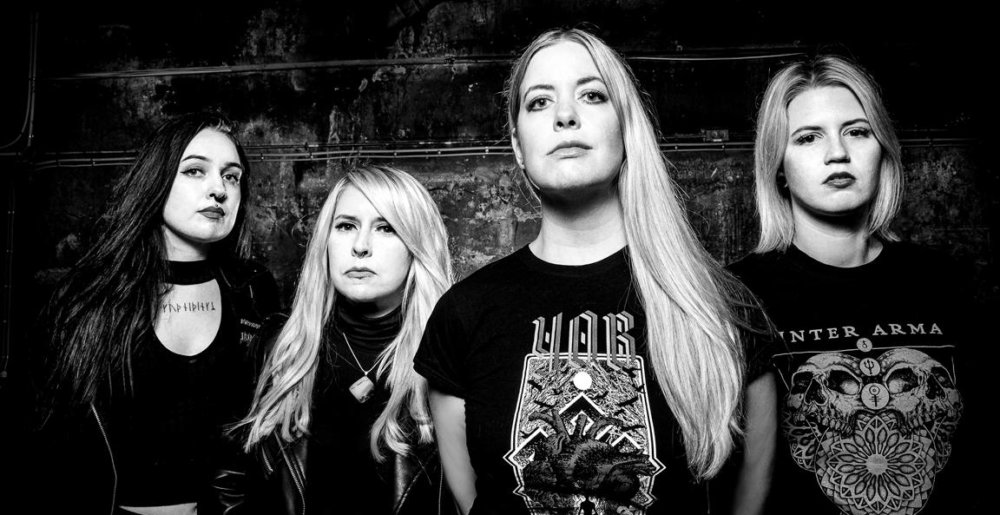 All four members of Konvent are the latest metal troubadours to share their most prized threads for our My Metal T-Shirt Collection series! The Copenhagen-based death-doom unit will release their first full-length album, Puritan Masochism, via Napalm Records on Friday, January 24 (order here); have a listen to the album’s debut single, “Trust,” as you browse through their favorite t-shirts below.

Dirt Forge are a great Danish metal band and we all know them very well. They were actually the reason why we all got together in Konvent, because I first got in contact with our former drummer through Dirt Forge’s drummer, and our guitarist, Sara, is Alexander from Dirt Forge’s girlfriend. I remember playing our first show in Copenhagen at the release show for Dirt Forge’s first album, which was a blast! Since then we’ve played with them several times and they rehearse just a few meters away from us, so we often drop in on each other to say hi. Make sure to check out their music!

Solbrud are another great Danish band who play a unique form of black metal and are all really talented musicians! Solbrud continue to push the boundaries for concert venues; for example, they recently played two shows at an old water tower outside of Copenhagen. It was such a beautiful place and it was the perfect match for their music. I froze my ass off in there, but experiences like that are always worth it!

Full of Hell are one of my absolute favorite bands. Their music is just so chaotic, heavy and angry. I’m such a fan! I think I bought this cool longsleeve drunk as hell at the Roskilde Festival when they did their split show with The Body.

I’ve been listening to a lot of Dragged Into Sunlight lately. I’ve seen them perform three times, and they never disappoint! I’m not the original drummer in Konvent, but I actually discovered them two years ago when they were supporting Dragged into Sunlight. Only a few weeks after the concert, they were looking for a new drummer and I became a part of the band. I guess the rest is history.

Mantar are one of my absolute favorite bands. Those guitar riffs! I bought this shirt at a concert in Brooklyn, NY. They we’re supporting Conan and I really didn’t know the band at that time.

This is a classic for doomers! Great band, great sound and a pretty cool design!

I got this t-shirt after seeing Origin live for the first time in 2008. It’s a size too small but it was the only one left. The band had blown me away completely and I HAD to get it. Hoping to get many more Origin girlies in the future!

I got this baseball t-shirt at a Monolord concert in Aarhus, Denmark. My ex-boyfriend and I had driven all the way from Copenhagen just to see them. I wore it to our first photoshoot after Julie joined the band and now we have toured with them; it’s times like this where I have to pinch my arm and where I feel our hard work has paid off.

Here’s your guide to all of this week’s heaviest new releases! Includes Annihilator, Crowbar’s Kirk Windstein, Midnight, and more!!!