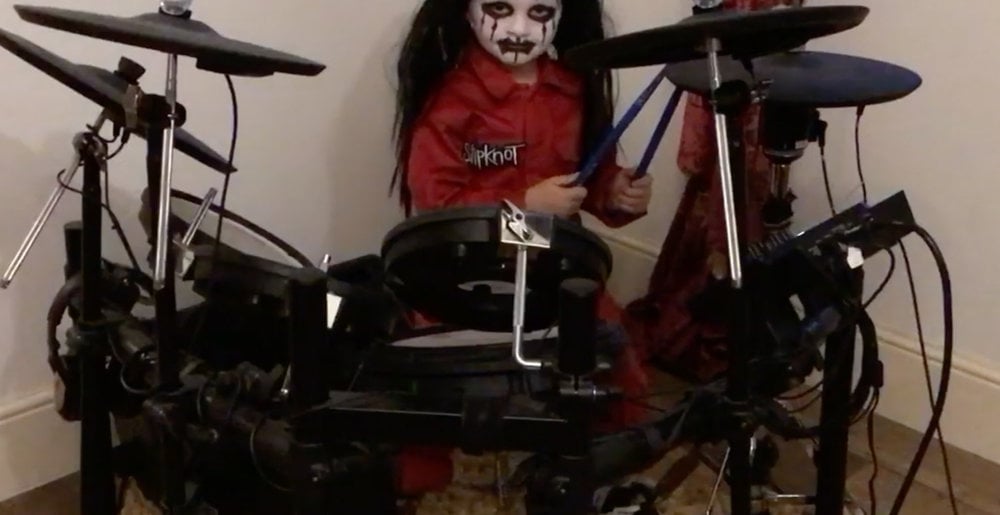 Yesterday, the metal world both fell in love with, and became deeply concerned about, Caleb H. The 5-year-old Slipknot fan has been playing drums since he was two, and a video in which he air drums along with the band during a show — and totally nails every hit, fill, and accent — made everyone go, “Awwwwww!” But also, Caleb wasn’t wearing ear plugs in the video, which made everyone go, “Errrrrr…”.

Now we have a video of Caleb, dressed as Joey Jordison — who was fired from Slipknot before Caleb was even born — doing an actual drum cover (i.e., not just air drums) of “Before I Forget.” It’s not clear if they lil’ dude has ear plugs this time, but it is clear that he’s got a ton of talent. Also at this point he may actually be taller than Joey Jordison. I can’t confirm that, though.

Watch the video at the bottom of this post. Slipknot are currently on tour in the U.K. and Europe, and remaining dates are as follows:

Metal Sucks Greatest Hits
0 -
The 110% Totally True Confessions of a Left-Wing Conspirator
0 -
Video Footage of Emmure’s Frankie Palmeri Getting Electrocuted On Stage in Russia
750 -
Anthrax vs. Axl vs. Anso: The Worship Music Double Review
0 -
50 Metal and Hard Rock Musicians’ Yearbook Photos
820 -
Rigged: Dream Theater’s Mike Mangini Takes You Through Every Piece of His Mega-Drumkit [Part 1]
0 -
Debunking the Myth that Guitar Hero Made Dragonforce