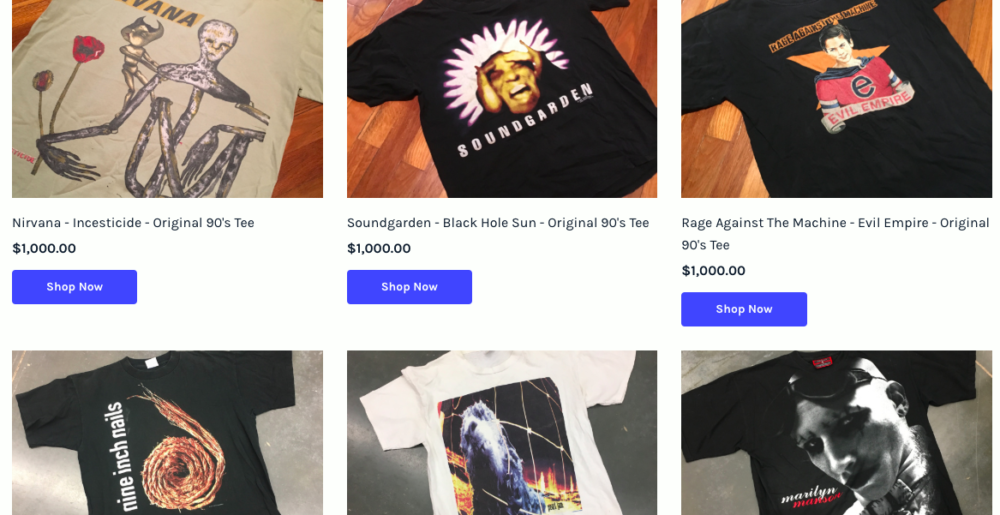 These Vintage Metal T-Shirts are On Sale for Only $1,000 Each

Some of us enjoy shopping in second-hand clothing stores in search for that lone black t-shirt in a sea of colors, that one secret find most unsuspecting normies would glance over. I’ve scored a couple of dope metal shirts that way, including a sick Queensryche shirt from the Building Empires tour in 1990.

Others, meanwhile, can simply shortcut that process by droping $1,000 online!

The BloodRed Prints online shop currently has six shirts, which they’re billing as “Old School Legit 90’s Vintage Tees,” selling for a grand a pop. Those include Nine Inch Nails, Marilyn Manson, Nirvana, Soundgarden, Rage Against the Machine and Pearl Jam. Quite a haul, to be sure, but is anyone actually gonna shell out for those??

The answer, I’d think, is no: those shirts seem as if they’ve been placed in whatever the online equivalent of a store’s front window is with the goal of drawing folks in to buy other stuff. And the store actually has a sweet selection of things you or me might be interested in buying: a “666 Misery Trucker Hat” with a logo in the shape of Missouri, and a whole bunch of t-shirts that could be generally described as “metal-looking” for only $10 each.

Give the store a visit here, and if anyone wants to yer ol’ Uncle Vince a solid and purchase that NIN shirt I certainly wouldn’t say no! DM me on Twitter for my address!

Just because you love a musician doesn’t mean you can rock their t-shirt.

Metal Sucks Greatest Hits
0 -
Thirty of the Worst Metal Band Promo Photos of All Time
1350 -
Oceano Prove That Deathcore Has Depths
0 -
50 Metal and Hard Rock Musicians’ Yearbook Photos
0 -
Chad Kroeger and Avril Lavigne Finally Wrote a Song So Awful that the Internet Has Collectively Rejected It
0 -
The Top 25 Modern Metal Frontmen: The Entire List in One Place
0 -
Joey Jordison Claims He Was Fired from Slipknot Via a Singing Telegram