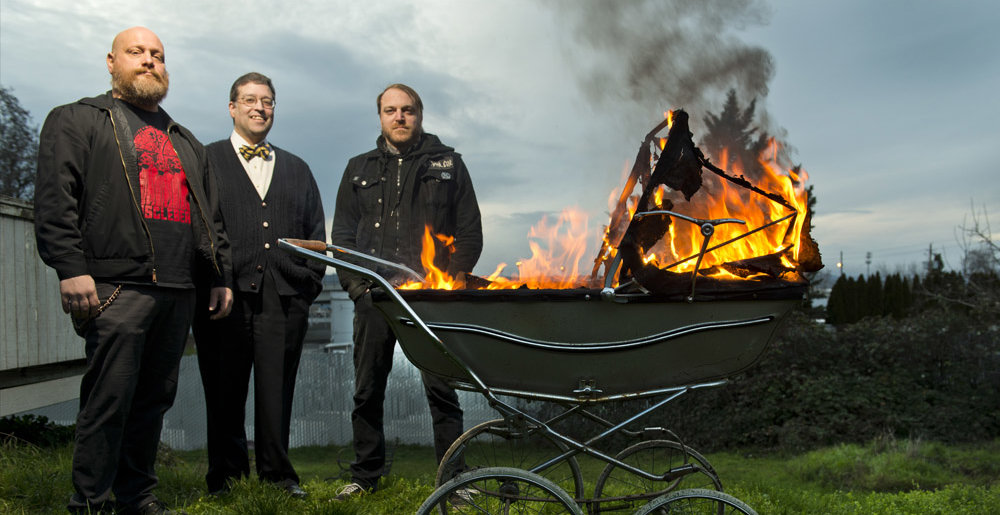 Exclusive Full Album Stream: Gaytheist’s How Long Have I Been on Fire?

Need a pick-me-up during this apocalyptic epoch? Look no further than How Long Have I Been on Fire?, the fifth — and best! — album from longtime MetalSucks faves, Gaytheist. As the record’s title and cover art suggest, How Long Have I Been on Fire? doesn’t want for aggro acknowledgement of these thoroughly fucked up times… but that acknowledgement comes with a healthy does of tongue-in-cheek fun. Never dour, it’s decidedly more Catch-22 than All Quiet on the Western Front, another blast of infectious, energizing metal, punk, and noise rock from a band that has already proven to be masters of the form. It’s the most fun you can legally have without committing arson.

MetalSucks is THRILLED to premiere How Long Have I Been on Fire?, which you can stream in its entirety below. Below that, you can also check out a short promo video for the album. How Long Have I Been on Fire? will be released this Friday, April 10 via Hex Records. Pre-order it here. The band had planned to play a handful of Pacific Northwest shows around the release date in April, which have now been cancelled. They were to be followed by more extensive North American dates in summer. It remains to be seen whether or not those shows will actually happen, but we’re gonna be optimists for once and include the group’s complete tour itinerary at the bottom of this post in the hopes that you’ll get to check ’em out live sometime real soon.

Sponsored Links from Across the Internet
Show Comments
Related Articles
Cinemetal 0
Red Fang Eulogized by High on Fire’s Matt Pike and Yob in “Rabbits in Hives” Video
October 25th, 2021 at 11:25am MetalSucks

“God, how will the world survive with one less average rock band made up of four, straight white guys?” – Jason Rivera (Gaytheist)

Here’s your guide to all of this week’s heaviest new releases! Includes Nightwish, Joe Satriani, Azusa, Gaytheist, and more!

Kensel was in the band for 21 years spanning eight albums.