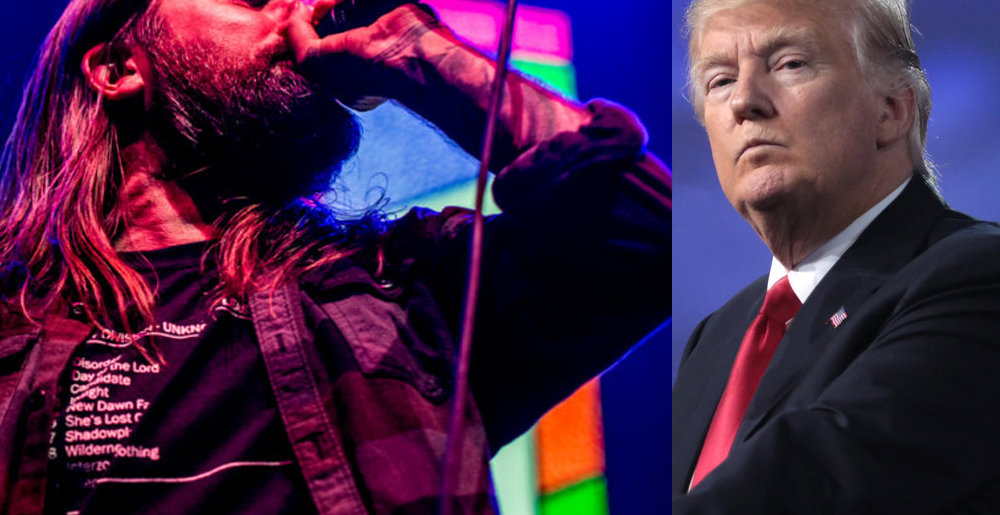 Like most intelligent humans capable of empathy, Every Time I Die vocalist Keith Buckley had not hesitated to voice his displeasure with Donald Trump and his entire administration. In fact, in 2018, Buckley even went so far as to tell Trump fans that “My band doesn’t need you. Nobody does.” So. Yeah. A member of the MAGA-horde, Buckley is not.

Given this, and the fact that Every Time I Die’s forthcoming album will be their first since Trump took office (2016’s Low Teens was released a couple of months before that year’s presidential election), Buckley’s recent reveal that the record’s lyrics were largely inspired by the Trump administration doesn’t come out of left field. When Alternative Press recently asked the frontman “What was the single greatest force on your lyrics this time around?”, Buckley offered this lengthy, passionate response:

“The Trump administration coming into power. And I know some people prefer to keep politics out of music, but in one way or another, politics inform everything we value. It’s not a cat you can put outside for the day. Its arms reach into art, music, literature, our careers, our neighborhoods, our family structures, our access to essential goods and services, EVERYTHING.

“But OK, let’s pretend it is possible to set aside the political implications of the current Trump administration. Take away all policy-making ability and media coverage. What you have now is a demographic of human Americans forging an identity from the absolute worst and most dangerous resources they possess because they saw one evil man’s rise as validation of the idea that ‘evil’ can take what ‘good’ cannot earn. To people rightfully tired of being shit on by those in charge—bosses, wives, husbands, ‘the coastal elite,’ whatever—the idea of a sudden and newly ‘acceptable’ power grab seemed too good to be true. So they built an identity around their darkest parts, the ones they’ve had to repress as part of our social contract but no longer need to. I imagine it felt like taking your bra off after a long day of work.

“With this now in play, the game is on as to who can be the worst in the shortest amount of time, which is why the internet blossomed like a corpse plant. Innumerable grifters raced to the bottom by pandering to hate, jealousy, bitterness, fear and confusion through self-destructive contrarianism. Intentionally duplicitous bullies operating in abject bad faith who use not instinct or courage to guide them through their lonely, miserable lives but the outrage they revel in when they conflate ‘bravery’ with ‘shamelessness’ and ‘the righteous anger of the marginalized’ with ‘arbitrary violence’ because they delight in pain and cruelty and cannot even comprehend how empathy functions.

“You don’t need to hang out in political circles or listen to political podcasts to know that supporting the Trump administration is a question of human decency, of morality. Seeing how such brazen stupidity and heartlessness affects people who just want to follow their own bliss and love whoever they want to love and provide a better life for their families, it disgusts and angers me. But I’m not so blinded by that anger that I can’t recognize a symptom of helplessness when I see it. This spoiled, delusional preteen of a country has failed the people it was supposed to protect and made us feel so worthless that there are actually those of us who don’t believe that we deserve things like Medicare For All. And even if they do, it’s not enough to have. Others must have not.

“The short version: I didn’t think I’d ever be able to write better or more charged lyrics than what I wrote for ‘Low Teens,’ but that record was about personal uncertainty. This one is about universal uncertainty.”

Although Buckley’s stance is expected given his previous comments about Trump, it’s still always great to see someone in his position using their sizable platform to preach the good gospel. There are a lot young, impressionable ETID fans out there… even if the band only gets through to a handful of them, it will have been worth the effort.

We still don’t know when the new Every Time I Die album will be released, but hopefully it will include an anthem about Clorox Chewables.

Metal Sucks Greatest Hits
0 -
Having a Rough Day? Try Hatebreed Motivational Posters!
0 -
Etienne Sin: What the Actual Fuck
880 -
Anthrax: 101 Singers We’d Rather See Than Joey Belladonna
1840 -
The Final Word on Metal Drumming
0 -
BREAKING: Some Local Band Called Shrapnel are Tired of You Leaving the Show Before Their Set
0 -
This Dude Sounds EXACTLY Like Layne Staley