Metal Sucks
Metal Sucks Tom Morello Has Been Playing Dungeons & Dragons with... Rescheduled Tours are Being Canceled Now (*Cough* Fit For a...
- Tweet SHARE
Enlarge
Metal in the Media 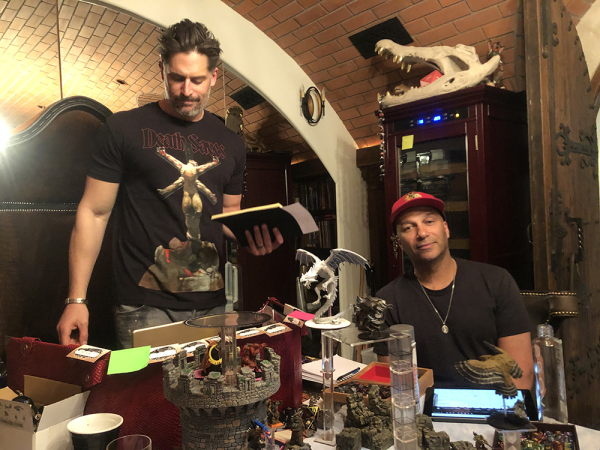 Tom Morello Has Been Playing Dungeons & Dragons with Celebrity Friends

Watching Netflix, Zooming with friends, playing music, reading books… we’ve all gotta pass the time somehow during these long days and nights alone. For Rage Against the Machine guitarist Tom Morello, he’s taken to the classic nerd pastime of Dungeons & Dragons together with an impressive group celebrity friends.

Actor Joe Manganiello, best know for his role as Alcide Herveaux in True Blood, has been hosting the sessions from his basement for the past two years with a core of players that includes his brother, Nick, writer John Cassel (with whom Joe once co-wrote a D&D-based script for Warner Bros.), Fanboys director Kyle Newman, League of Legends story designer Ryan Verniere, Crossfit Masters champion Ron Mathews, and WWE wrestler Paul “The Big Show” Wight in addition to Morello. Some special guests that have joined the sessions includes actor Vince Vaughn, Game of Thrones co-creator D.B. Weiss, Suicide Squad director James Gunn and Saturday Night Live cast member Taran Killam.

A new feature in Variety outlines the history behind the gathering, which has transitioned from Manganiello’s basement to the online world in the coronavirus era using Zoom and Roll20, an app made specifically for the purpose.

Manganiello is quite the expert dungeon master, according to Morello:

“You would not believe Joe’s dungeon. There’s nothing that could occur in the game that someone could come up with in the spur of the moment that isn’t in some box. Like, the druid turned themselves into a weasel, and Joe says, ‘What color weasel?’ And then the red-striped weasel [miniature] comes out. It’s pretty amazing.”

Morello seems quite taken by the adventure, revealing he thinks about it in between weekly sessions:

“It’s similar to what a high-stakes poker game might be. It’s a game where friends gather that’s taken deadly seriously and is a lot of fun. But it’s serious. It’s very serious! We’re on an adventure that I think about a lot during the week.”

You can watch a video featuring some clips from the sessions, as well as the participants talking about the game, below.