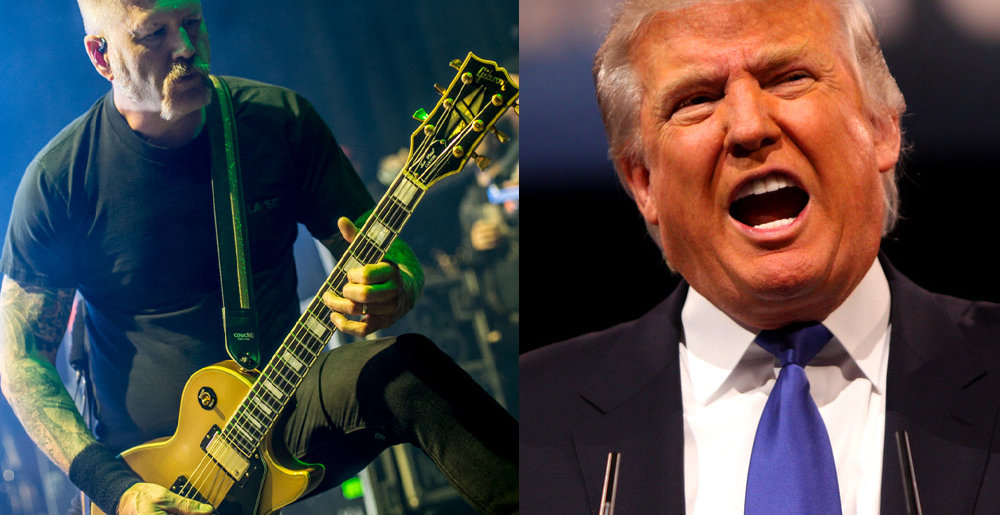 The part of Mastodon guitarist Bill Kelliher’s recent interview with  The RRBG Podcast on which everyone has been focused is all about the music — how much of the band’s next album is written, their contribution to Bill & Ted 3, blah blah blah blah blah. Borrrrrrrrrrrrrr-ingggggggggg.

That demonstration came after the guitarist was asked about smart people who inexplicably believe lies about the coronavirus. Kelliher had a few thoughts. Just a few.

“It all stems from these idiot Trump supporters who believe everything that this orange shitstain says. He’s so wobbly, it’s ridiculous that anyone would still, to this day, take him seriously and believe that he has your best interests in his agenda. He does not, and it’s obvious.

“What it is, is he wants to blame everything on [former President Barack] Obama… ‘Cause he’s a total racist. So just out of spite, he wants to undo everything that Obama’s done. And in doing so, he’s undone the American population. People are picking sides. Now it doesn’t matter what your beliefs are — you’re either Democrat or Republican. You can’t be bipartisan; you’re just one or the other to the death. It doesn’t matter what Donald Trump says — you just believe everything blindly.

“That’s why when if someone suggests that, ‘It’s a political thing,’ or, ‘It’s a ploy by the Democrats to make me look bad,’ it’s, like, ‘No. You’re looking bad on your own, buddy. You are completely capable of looking bad on your own.’ So that’s where it’s all stemming from. And now people are, ‘Oh, this is a hoax. We’re gonna do what we wanna do,’ and ‘freedom’ and all this bullshit.

“If everyone just stayed in their house for, like, three weeks, then this shit would be over with and we could about our lives. But they won’t, because they wanna defy what they think are the Democrats, and for political motivations, to defy anybody who has any brains behind them, really, and science. They wanna just go outside and go back to work. And you can’t do that. We’re never gonna get back to work with this attitude.”

Kelliher was also not a fan of the one-time $1,200 stimulus checks the government issued to eligible citizens:

“Whose idea was it to give out $1200 to everybody?. What the fuck is that gonna do? That’s peanuts. That’s ridiculous… And that’s like a one-time thing. And the audacity of that prick to hold that money until he could have each [check] stamped with Donald Trump’s name. What a fucking scumbag. I just can’t believe [it]. Egotistical maniac. It’s unfathomable that we live in a country in 2020 and this fucker is still in charge. He’s an idiot.”

Kelliher didn’t stop there, going on to profess that he is “losing faith in the American people”:

“America is dumb — people are dumbed the fuck down so hard, especially compared to other countries. I travel all over the world and I just see how much better it is. Believe me, I love my country, I love it here — it’s just the people I can do without. [Laughs] Not everybody. The people I know and I associate with, we’re all kind of on the same page. I’m sure me speaking like this, someone will be, like, ‘America, love it or leave it.’ No — you fucking leave it, man. You’re the fucking idiot.”

And finally, Bill shared his thoughts on the ongoing war over women’s rights:

“The whole ‘snowflake’ argument about, ‘Well, let’s reverse abortion.’ It’s, like, no, abortion is legal, dude, in America. You’re the one who’s wrong if you’re trying to reverse it. You’re the fucking snowflake. You can’t handle it. Get the fuck out. You don’t want abortion? Then don’t fucking have one — period. Stay the fuck out of my business.”

What is there to say, really, about Kelliher’s comments? At this point, it’s safe to say that Trump supporters are a lost cause. But I don’t think he’s trying to change anyone’s mind; I do think he may have just inspired some Red State sixteen-year-old to tell his Trump-lovin’ parents to go fuck themselves. That’s about as excellent a use of Kelliher’s considerable platform as I can imagine.