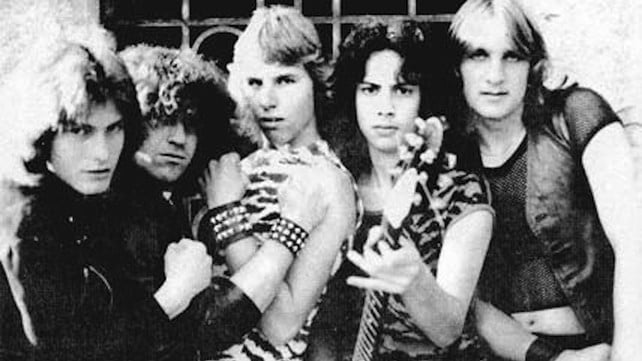 When Kirk Hammett Quit Exodus to Join Metallica, Paul Baloff Poured a Beer on His Head

I wonder what percentage of Metallica fans are aware that Kirk Hammett was once a member of Exodus? It’s such ancient history, and so not an important part of Exodus’s legacy, that sometimes I even forget. But it’s the kind of metal nerd trivia that journalists are gonna be peacocking to Hammett in interviews until the end of time, and in a recent conversation with Louder Sound, Hammett entertained the question about his 1983 exodus from Exodus with a fairly detailed recollection.

Recounting how the band took the news that Hammett was leaving, the axeman says that former Exodus singer Paul Baloff became so angry he poured a beer on Kirk’s head. As Kirk tells it, he was on the crapper when he got the call from Metallica, and because it was April Fool’s Day he didn’t believe it was real:

“It was April 1st, April Fool’s Day, and I was sitting on the toilet. I got the call from [Metallica sound engineer] Mark Whittaker, and after I hung up, I was like, ‘I can’t believe I just got that phone call. Was that an April Fool’s Day prank?’

“A couple of days later I got this tape from them, but I already had the demo and I already knew two-thirds of the songs on there.

Asked if he felt guilty at the time leaving a band he’d co-founded, he answered:

“Oh yeah. But, you know, I also left a lot of music with those guys. A lot of the music I wrote ended up on that first album [1985’s ‘Bonded By Blood’], and they recorded some other songs that never made it.

“I never said anything because of the way I left them. I always had guilty feelings about that. Well, not anymore…”

One time Axl threatened to quit MetalSucks so I poured a beer on his head, after which he decided to stay after all. Shame works! True story.