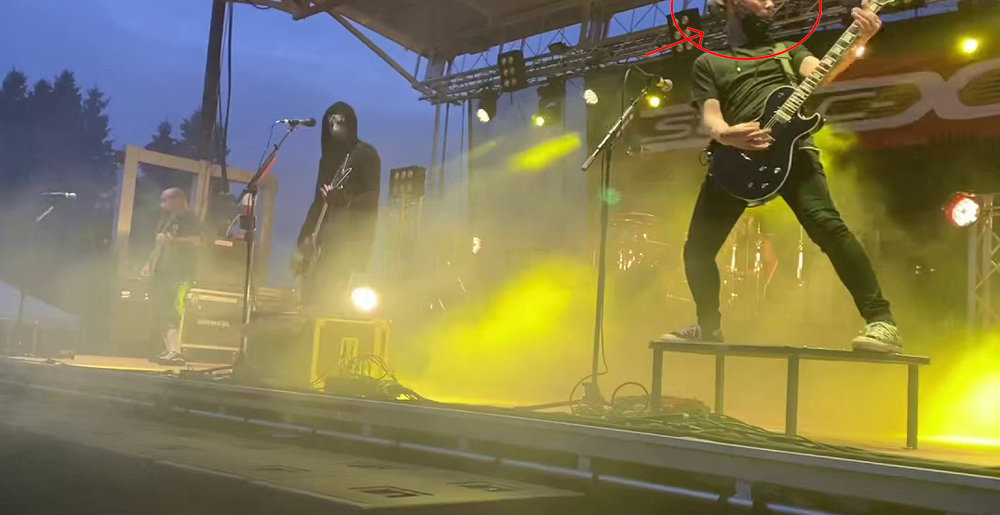 The controversial “Mini Fest” — once known as “Herd Immunity Fest” — has come and gone. It will probably be awhile before we can gauge whether or not it was really “safe” to hold the three-day-event in a part of Wisconsin where coronavirus cases are on the rise, but in the meantime, we can analyze fan-filmed video of the set by headliners Static-X, as well as some photos of the crowd.

So, first, the photos: it does not look like anyone in the crowd took Static-X’s pleas to wear a face mask to heart. It also doesn’t look like there were very many people in attendance, though, and at least some of the concertgoers did take measures to remain socially distanced from fellow attendees.

As for the video, it appears that Static-X guitarist Koichi Fukuda did wear a face mask… although he never covered his nose, and frequently didn’t even cover his mouth, instead wearing the mask down around his chin (see photo above). So I guess it was just for show? He might as well have been wearing a creepy Wayne Static cosplayer mask, for all the good it would’ve done him.

You can check out the video and the photos below:

Metal Sucks Greatest Hits
0 -
Heavy Metal Drinking Games
0 -
Twenty Hard Rock and Heavy Metal Celebs’ Mugshots
880 -
The Looks That Kill: God Forbid’s Doc Coyle on the Role of Image in Music
0 -
Website Photoshops Dogs in Place of Bass Guitars Because Why Not?
0 -
Report: “The Number of Heavy Metal Bands in a Given Country is Associated with its Wealth and Affluence”
7810 -
Does Anyone Know What the Hell Clown from Slipknot Is Talking About?