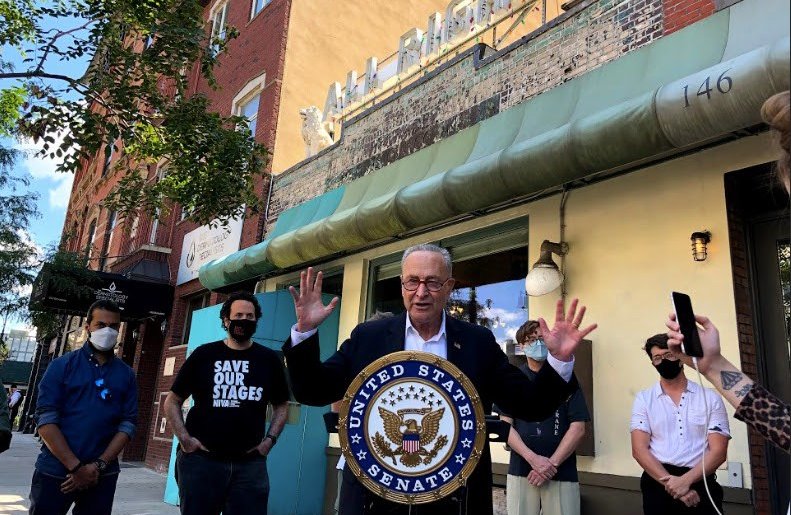 A group of U.S. Senators led by John Cornyn of Texas and Amy Klobuchar of Minnesota introduced a new relief bill last month that would help independent music and entertainment venues struggling during the pandemic. The Save Our Stages Act, as it’s been titled, has now gotten backing from Senator Chuck Schumer, a prominent government voice who is the Minority Leader and represents the state of New York, a crucial entertainment hub.

A recent survey of 2,000 independent music venues conducted by a newly-formed organization called the National Independent Venue Association, or NIVA, came to the conclusion that “90% of independent venues report they will close permanently in a few months without federal funding.” Furthermore, “Current [Paycheck Protection Program] funding will not solve the crisis,” as that government program was designed to only cover eight weeks’ worth of payroll. Venues were some of the first businesses to close when the pandemic began and will be some of the last to open; eight weeks is a drop in the bucket.

NIVA’s consistent lobbying efforts have paid dividends with the new endorsement from Schumer. Speaking in front of the small but beloved Brooklyn venue Baby’s All Right, Schumer pledged to include relief for struggling venues in any future coronavirus stimulus efforts from the government:

“Independent venues, like theaters and concert halls, are the beating heart of New York’s cultural life and a driving force in the economy. These local businesses were among the first to shut down at the start of the pandemic, are struggling to stay afloat, and will be among the last to reopen. That’s why it’s so important to provide dedicated federal assistance to independent venues so when it is safe, we can gather again for music, comedy, theater and other live performances in venues that have been around for generations. I’m proud to co-sponsor the Save Our Stages Act, and I’ll fight to include federal funding for independent venues in any coronavirus relief legislation.”

The Save Our Stages Act, as it’s been titled, proposes $10 billion to help venues through the next six months to be distributed via grants of up to $12 million per venue, or 45% of the venues’ operating costs in 2019, whichever is less. The funding could be used to cover costs incurred during the pandemic, as well as pay for rent, utilities, mortgages, personal protective equipment, maintenance, administrative costs, taxes, and expenses that would allow venues to meet local and federal social distancing guidelines. “Supplemental grants” are included as a possibility in the future if additional funding remains necessary. The bill pledges to “narrowly define independent live venue operators, promoters, and talent representatives to prevent large, international corporations from receiving federal grant funding.”

The Save Our Stages Act would still need to be passed by both the Senate and the House of Representatives — or included in a larger relief bill — and then must be signed by the president before it becomes law. But Schumer’s endorsement puts some serious weight behind it, and indicates the music industry’s cries are being heard.

The $900 billion act Congress agreed on this weekend has an earmark for live entertainment.

Metal Sucks Greatest Hits
0 -
Editorial: True Loyalty Means Admitting When Your Favorite Bands Suck
0 -
Has Moshing Turned Into a Form of Bullying?
0 -
Metal Musicians Reacts to Maroon 5’s Lame Super Bowl LIII Halftime Show
0 -
Why There Will Never Be Another Metal Band as Big as Metallica
0 -
BREAKING: Slipknot Guitarist Mick Thomson Stabbed in the Head by Brother
220 -
Hey Guys, Did You Know That Virgin Steele are From Long Island?