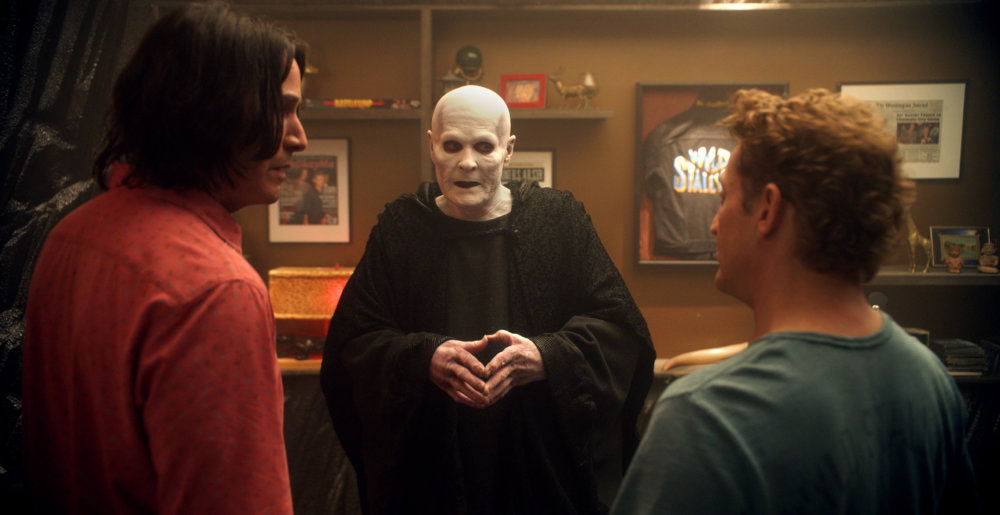 William Sadler has had a long and illustrious career in film and television, thanks largely to dramatic roles in movies like The Shawshank Redemption and Die Hard 2. But to metalheads around the world, he shall forever known for his hilarious work as the Grim Reaper from Bill & Ted’s Bogus Journey. So integral was his role to that movie’s success, in fact, that fans simply couldn’t imagine a third Bill & Ted movie without him.

Luckily, they won’t have to! The Grim Reaper returns for another excellent adventure with Bill S. Preston, Esq. (Alex Winter) and Ted “Theodore” Logan (Keanu Reeves) in Bill & Ted Face the Music, the eagerly-anticipated third installment in the franchise.

MetalSucks recently caught up with Sadler via phone to discuss what it was like to return to the role after all these years, the differences between working with new and old members of the creative team, the relevance of the movie’s message in 2020, and more. You can read the full transcript of our chat below (fair warning — there are some mild spoilers in there).

Bill & Ted Face the Music comes out this Friday, August 28 in theaters and on VOD.

This is your third time playing the Grim Reaper (counting an appearance on Tales From the Crypt). How does one go about preparing to play Death?

[laughs] You sit in the make-up chair for three hours and then you put on the heavy death robes and you warm-up your Czechoslovakian accent.

I don’t know! I guess I put my silly hat on. The character came to me back during a sketch comedy show called Assaulted Nuts. I played the Grim Reaper. If you go on YouTube I think you can see it. It’s me doing the Reaper for the first time. So I guess this is a character I’ve been carrying around with me for awhile.

How does it feel playing the role now versus almost thirty years ago?Was it hard to get back into, or was it like an old, comfortable shoe?

I was actually surprised at how fast and easy it came back to me. It’s been almost thirty years, but as soon as I started getting back into character, he just came alive again. It was like I’d been carrying him in my pocket for thirty years and I let him out to play. It wasn’t dificult to embody that character again.

I’m older now, so physically, it’s a little bit harder. The robes felt heavier. [laughs] I’m a little creakier now. But it did slip right on like a comfortable shoe I guess.

What was it like working Brigette Lundy-Paine and Samara Weaving [who play Bill and Ted’s respective daughters, Billie and Thea] in comparison to working with Keanu and Alex?

I thought they did a fantastic job. They were wonderful to work with as actors. It’s always a question mark when you work with new people you’ve never worked with before… “How skilled are they going to be? Are they good listeners?” And what I found was that Brigette and Samara are wonderful listeners. That’s half the job as an actor – listening and reacting. When it’s good, it always feels like a tennis match. You hit it over the fence to them, and they hit it back to you.

We get a lot of backstory as to what death has been up to since we last saw him. Do you find that helpful?

[laughs] Yeah, I find that very helpful. I love that he’s had this musical solo career that didn’t go anywhere. I mean, it’s sort of like the break up of the Eagles. I love the backstory. That is one of my favorite things [in the movie]. He put out albums that were nothing but bass and they didn’t sell because it was nothing but bass. Very experimental.

Did [screenwriters] Ed Soloman and Chris Matheson talk to you beforehand about how you saw the character going this time around, or did you not find out until you read the script?

Ed and I have been communicating back and forth. Not so much Chris. But Ed told me three years ago that they were writing this third installment. He said, “We’d like to have Death in it. Would you be interested in playing the role again?” I said “Yes!”, because I had so much fun on Bogus Journey. Then he described the backstory we just discussed. [He said] “We have to know Death’s been doing for twenty-something years. It’s not been pretty.”

Thematically, though, it also fits in with the movie’s theme about unity… I mean, the Bill & Ted movies have always been about unity, but there’s something especially relevant about it now.

Can you tell us a little bit about the differences in working with [Bogus Journey director] Pete Hewitt and [Face the Music director] Dean Parisot?

Well, I loved Galaxy Quest [which was directed by Parisot]. When I heard Dean was going to direct this one, I was like, “YES!”. I was completely sold. He was delightful to work with. He was really great and supportive. I came with my character and he just set up the dance.

Dean and Pete are similar in this regard: once the scene was on its feet, and Alex was there and Keanu was there and I was there and the girls were there, once the machine was set in motion, Dean is a cheerleader. He would come up and laugh and say, “That’s great, try this.” [Parisot and Hewitt] both worked with a loose enough hand that you never felt like you were constrained.

Pete trusted us as well. I would try things with this character, because he’s so big. I would ad-lib and I would go places that weren’t quite in the script. If they were funny, they ended up in the movie, and if they weren’t, they didn’t. Pete was wonderful about that.

There’s a scene [in Bogus Journey] in the hardware store where the Reaper comes to a smoker and says “See you real soon” and just walks by. We were shooting the scene and I suggested that moment to Pete. And he said, “That’s great, man!”. But we didn’t have an actor to play the smoker, so he’s the smoker.

They just brought the camera over, it took two minutes to shoot it, and it’s in the movie. But that was the relationship with Pete. If it sounded like a funny, great moment, shoot it, who cares, it’s just film. If it doesn’t work, it won’t be in the movie.

You have a fun, make-up free cameo in Bogus Journey. I was keeping my eyes peeled for you in Face the Music, but I didn’t see you. Did I miss you?

No, I didn’t do a make-up free cameo in this one. That would have been fun. Maybe I should have. [laughs] It never occurred to me in this one.

That’s me and my family in Bogus Journey — that’s my wife and daughter. I told Pete I’d love to be in the movie somewhere, as a clerk in a store or something, without the make-up on. I thought it would really be fun. And that’s what they came up with.