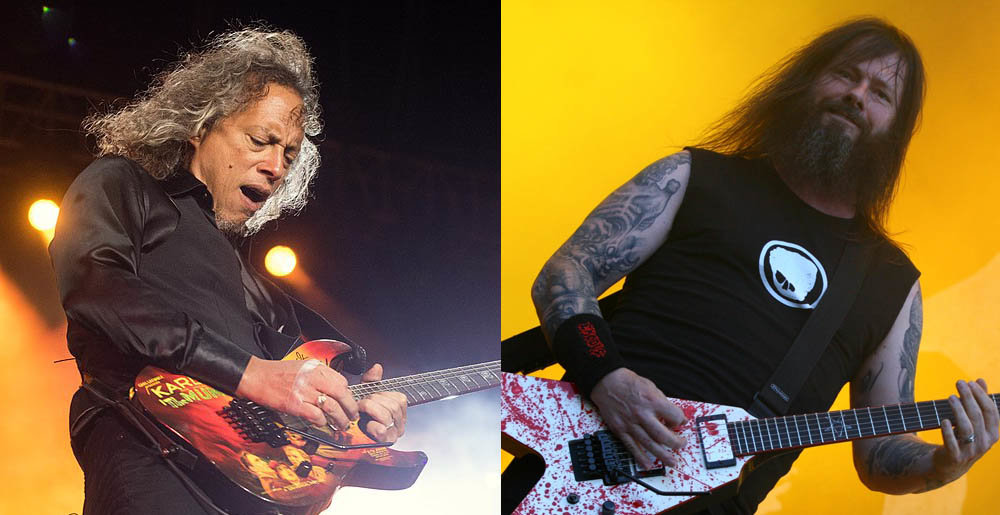 Back in July, Kirk Hammett shared a funny story about how then-Exodus singer Paul Baloff poured a beer on his head when Kirk announced he was leaving Exodus for Metallica back in 1983:

“It was April 1st, April Fool’s Day, and I was sitting on the toilet. I got the call from [Metallica sound engineer] Mark Whittaker, and after I hung up, I was like, ‘I can’t believe I just got that phone call. Was that an April Fool’s Day prank?’

“A couple of days later I got this tape from them, but I already had the demo and I already knew two-thirds of the songs on there.

Now Hammett’s oft-forgotten stint in Exodus has come up in the press once again, this time via Hammett’s former bandmate, Gary Holt. Speaking to Metal Hammer, the Exodus guitarist recounted how angry he was when he first heard a refrain from “Die By His Hand,” an unreleased Exodus song, pop up in Metallica’s classic “Creeping Death” with no permission given:

“So I’ve had the pleasure – and I use the term loosely – of watching 60,000 people chant ‘Die by my hand!’ at Metallica shows, yet I’ve never received a penny for it.”

Holt is doing just fine, of course — Exodus have been quite successful, and he served as Jeff Hanneman’s replacement in Slayer for several years — but I can only imagine how much that stings, let alone the fact that Metallica are, obviously, fucking massive in a way Exodus will never be. Maybe Holt and Dave Mustaine should start an ex-Metallica members support group.

Metal Sucks Greatest Hits
0 -
That Time Shaun Got Drunk and Filmed a Music Video with His Cat
0 -
Teenage Environmental Activist Greta Thunberg’s UN Speech Turned into a Swedish Death Metal Song
2510 -
Rose Funeral: The Uno Incident?
0 -
Scientific Proof That Djent is a Genre
0 -
MetalSucks Readers Declare Pantera The Most Unnecessarily Shat Upon Band in Metal!!!
0 -
BREAKING: Joey Jordison Back in Slipknot as Percussionist!