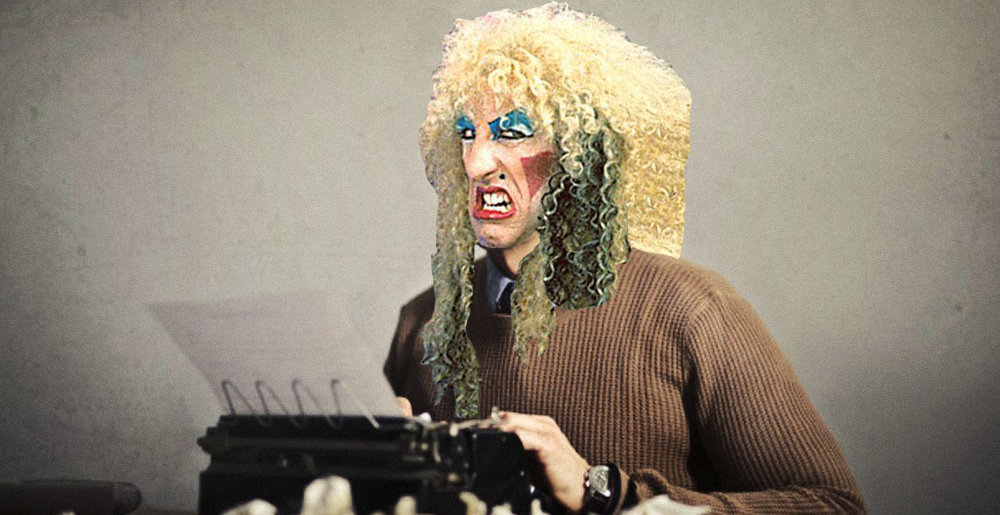 Having already penned his memoirs and the screenplay for the horror movie StrangeLand (in which he also played the murderous Captain Howdy), Twisted Sister singer Dee Snider has now turned his attention to his next great writing challenge: a novel.

Snider revealed the news to Full Metal Jackie during a recent interview:

“I recently had a run-in with the literary world as I decided to write my first fiction novel — I’ve been writing screenplays, I wrote my memoirs… I can write. I sent a few chapters to a literary agent and said, ‘Hey guys, give me some feedback,’ and he wrote, ‘Stick to rocking.’

“I know that I’m a solid writer and again, here I am — I’ve got prove myself. So I just dug in and I’ve written a hell of a book. Now I know it will be published and the first copy will go to that agent with a big ‘F you, thanks for the inspiration.’”

I’m actually surprised that literary agent wasn’t willing to take Dee on just because he’s, y’know, Dee Snider. Maybe they were secretly related to Tipper Gore or something.

ANYWAY, no word on what the novel is about. If I was a betting man, I’d bet Dee stays on brand and releases something in the horror genre, or, at the very least, related somehow to metal. But maybe he’ll shock us all and publish Twisted Sister Carrie or something.

You can check out the entire interview here.

Meanwhile, Snider has been working on getting a StrangeLand sequel going, literally, since before the release of the original in 1998. We’ll see if that ever gets off the ground.

Metal Sucks Greatest Hits
2760 -
Who Are The Top Ten Lyricists?
0 -
Video: Dudes Rockin’ Out to Van Halen Meet David Lee Roth, Have No Idea Who He Is
0 -
Jack Daniels Releases Single Barrel Whiskey in Honor of Motörhead
0 -
Rigged: Slipknot Percussionist Shawn “Clown” Crahan
0 -
Anthrax’s Frank Bello is Really Excited to Be Here, Not at All Concerned About Swallowing Bugs
0 -
The Top 25 Modern Metal Frontmen: The Entire List in One Place