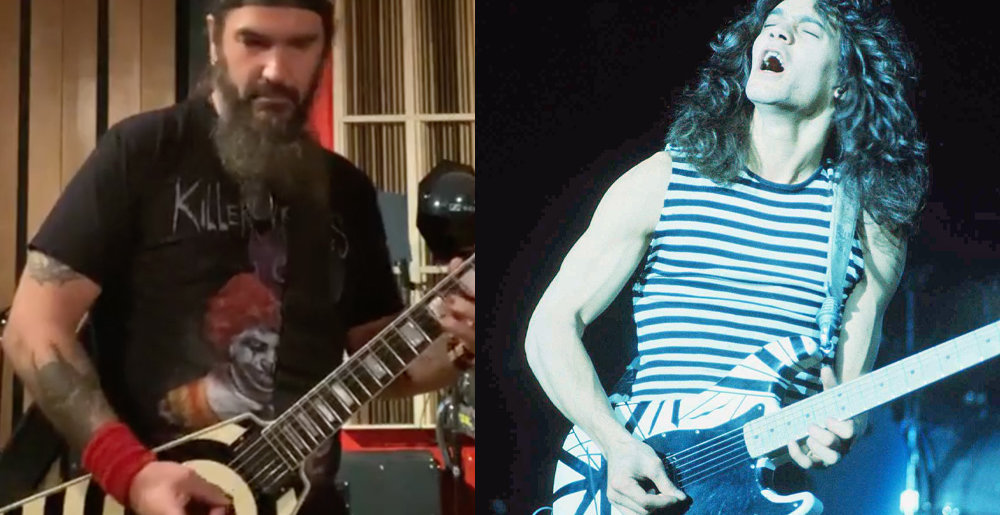 It’s hard to do very much right now other than think about the fact that Eddie Van Halen is gone, and much too soon. He’s on a very elite list of people who influenced ALL of metal and hard rock FOREVER, whether younger/future musicians even realize it or not. If you love metal… if you play metal… you owe Eddie Van Halen a huge debt.

So one can’t blame Machine Head mastermind Robb Flynn for going on a full EVH tear since news of the guitarist’s death broke yesterday afternoon. Flynn has now shared four tributes (as of this writing) to Van Halen, culminating in a cover of the revolutionary instrumental track “Eruption.”

“Oh my god… devastating???????????? Musician Eddie Van Halen has died. He was 65. The iconic guitarist and founder of his eponymous rock band lost his battle with throat cancer. Van Halen’s son Wolf shared a touching memorial to his ‘the best father I could ever ask for.’”

…before posting his second tribute, which included a vintage image of the late guitarist in action:

“I had this picture on my wall as a teenager. My mind is seriously blown right now. I cried. He is the GOAT. Guitarists still haven’t caught up to what he’s accomplished on those first five records. He was one in a billion. I was just playing “Eruption“ two days ago at the request of a fan, thinking, goddamn this song is still so fucking hard to play over 40 years later. And that fucking guitar tone… Seriously… That fucking guitar tone even in this day and age is complete savagery.

“This dude was a ROCK STAR. Larger than life personality, so much style, so much class. They broke the mold with Eddie Van Halen. Rest in peace legend????”

Flynn also shared a clip of the EVH tribute he included on his podcast, adding:

“I pay an emotional tribute to the late great Eddie Van Halen who was a MASSIVE influence on my playing, and the guitar world in general, the EVH posters I had on my wall, the reason I play leads/solos holding the guitar pick like Eddie, the time Frank from Hatebreed and I bugged out on the completely insane isolated guitar track for ‘I’m The One’ , the licks that I borrowed on MH tunes from the master, and I play some of my favorite songs and solos. Swipe my stories to watch on YouTube, or listen to the audio on Apple or Spotify podcast.”

And then, of course, there’s the “Eruption” cover:

“’Eruption’…nothing will ever be as good as the original

You can check out both the “Eruption” video and the podcast clip below. Expect more tributes to Eddie Van Halen to keep rolling it, be they from Robb Flynn or a myriad of other notable personalities.