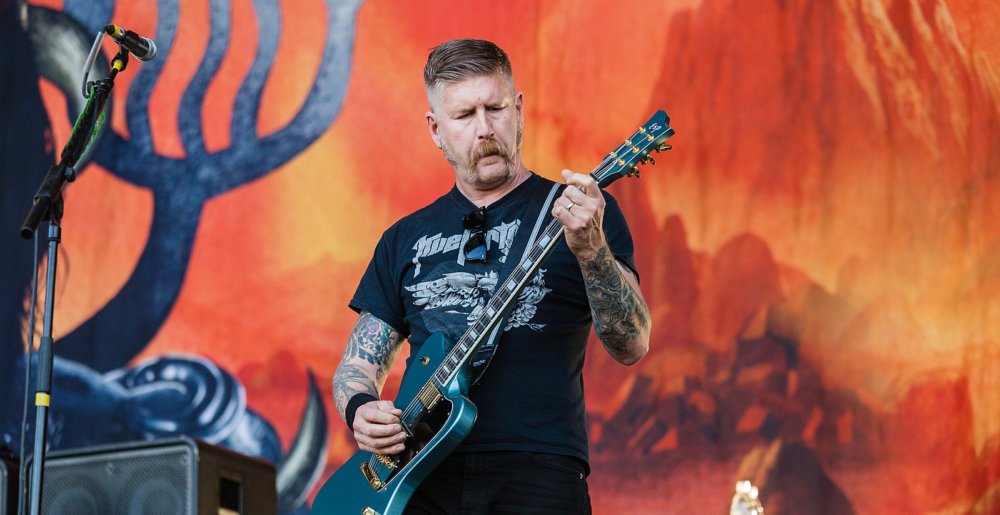 Mastodon guitarist Bill Kelliher covered a number of topics in his recent guest appearance on The MetalSucks Quarantinecast. Last week we highlighted a section in which he was startlingly forthcoming about the economic realities the band is facing during the pandemic — revealing he and at least some of the other members have gone on unemployment to stay afloat — and this week we’ll highlight an update concerning new Mastodon music: the band plan to begin recording their new album next month, and they plan on doing it in their own newly built studio with an as-of-yet unnamed producer.

Speaking on the band’s decision to build their own studio instead of paying exorbitant fees to record other places, Kelliher said:

“I always wanted to build a studio. I’ve built a few studios. I have a small one in my basement, which is basically a huge soundproof room with a control room, live room, stuff like that; very small. But just for me, ’cause I like to diddle with ProTools and [I’m] just demoing constantly.

“A couple years ago I had the chance to get a partner who’s an engineer and actually build a proper studio that we could turn into a business. That place is called West End Sound and that’s inside of Ember City, which is our rehearsal facility that we manage. We have a lot of bands in there that rehearse. So I was able to build that out a couple years ago and make it into a place where we could actually record our records. I just felt like, when I bought the rehearsal facility — it wasn’t a rehearsal facility until I built it out — but it was like, why am I paying somebody a thousand bucks a month to rent from them when we could pool our money together and get a loan from the bank and buy a building and turn it into the same thing? And then we’re just paying ourselves. So that’s what we did.

“And then I thought the same with a recording studio. Why are we paying a thousand dollars a day out in Hollywood to rent a recording studio to do a record? And then, say you spend half a million dollars on a record, which is, that’s about right. That’s basically your money, its not like the record company pays for it, they front you the money to do it and it’s your job to make the money back by touring and selling records and products, even though they take a certain percentage of that as well. Say you spend $500,000 on a record, $300,000 goes to a producer and the other $200,000 to hotels and things and renting out a recording studio, engineer, whatever. You make a record, that record goes to Spotify, Apple Music. I have nothing against Spotify, Apple Music, Pandora, all that stuff but it’s a joke. People pay $9.99 a month to listen to unlimited amounts of every band, every artist. How does that equate to your half a million dollars you just spent on one record? It’s very unbalanced.”

“If we have our own studio now, we don’t have to pay these exorbitant amounts of money to record there, a thousand bucks a day… gimme a break. ‘Cause you know you’re never going see this money again, you’re throwing your money into an ad, which is your record, so that people come see you play the concert and buy your stuff. But if there’s no concert you’re just making this free ad that’s costing half a million dollars where people can just basically listen to as much as they want on Spotify and Apple Music and all that stuff. If it keeps going this way, bands are going to disappear because no one can afford to be out there spending that kind of money to make no money.”

We then asked Bill directly if Mastodon plan to start recording their new album next month at the band’s own studio, and he replied:

“That’s the idea. Yeah, we don’t have an exact date. There’s a lot of things that are up in the air right now, but that’s the idea. We’d like to start recording ASAP. Let’s do it when we want to do it, let’s do it at our own place where we feel comfortable and don’t have to travel anywhere to shack up in a hotel for a month or two when we’re recording. Just being comfortable is the key word.”

When asked about the “shift in sound” on the band’s newest material he alluded to in an earlier interview, Bill explained:

“It’s hard for me to pinpoint it because I’m in it, you know what I mean? It’s always been hard for me. But to me because we’re always evolving, like you said, I’m always writing and writing and writing. A lot of it just goes by the wayside but the really good stuff makes it into a song. I’m always tinkering with new songs but I’ve got this Line6 Helix now that is my new toy, it has so many cool sounds in there. It inspires me to write cool riffs and different sounding arrangements. So that’s just one part of it.

“I think the vocals are always getting better, that was always one of our weaker points as a band.

“I feel like we’re much more prepared because we have a studio, we have access to my studio, my demo studio I have in my house, I’ll call it. We’ve spent a lot of time down there throwing ideas around, seeing what sticks, and once we’ve got some sort of semblance of a song, then we take it to the other studio and really put it down. [We have] really good sounding drums and equipment over there and just kind of fine-tune it.

“And I feel like every record that we do, we seem to be a little bit more and more prepared every record. And this one is no exception. This one we’re like, whoa, we’re way ahead of where we were for ‘Emperor of Sand.’ We had like seven or eight songs [beforehand], two songs came together in the studio, we didn’t have as many lyrics written, we didn’t have all the parts laid out and now we’ve got close to 20 song ideas that are pretty strong and pretty much finished. They’re almost what they’re going to be.

“I just feel like when I listen, [I think] we’ve never done this before, this is a cool sounding idea. It’s not like this is a country western song, there’s just different elements of stuff in there we throw in that still is Mastodon but in a new way. People are going to listen and be like ‘this sounds like Mastodon.’ We have our telltale riffs and sounds in there, but it’s a new take. I think we’re going with a new producer which is always an adventure. We just want to get some fresh ears in there, someone who doesn’t really know us that well who may have new, different ideas. A new way of interpreting what we’re trying to do.”

Kelliher wouldn’t tell us the identity of that new producer, but he did elaborate on why the band feels the need to bring in a set of “fresh ears” on each record instead of handling everything themselves:

“And when we’re playing these arrangements for six months, it’s hard to see any other way; this is the way the song goes. But when you get a pair of fresh ears, they say, ‘This riff is a hit riff. This is the riff you need to repeat.’ You know, they come in and they just hear it for the first time and go, ‘This riff you need to put back, this should be the core, not that.’

“Sometimes we disagree like we’re pretty bent on that being what it is, we’re not going to change it, we want it to stay as it is.

“Like the song ‘Ancient Kingdom’ on the ‘Emperor of Sand,’ we had a couple more parts of that – when we write a song, we would write an extra two or three riffs in there – because we know from the experience that the producers will come in and say, ‘There are too many riffs in this song, one has got to go, which one do you find the weakest one, which one doesn’t have vocals? What’s that riff? Get rid of it, you don’t need it, the song will sound better.’

“And we do, and it usually sounds pretty good without it. We never really see it. Sometimes it’s difficult to see the forest through the trees, because you’re smacked in the middle of it, and you need someone who is right above you to say, ‘That’s not the way out, the way out is over here, I can see it.’

“So, it’s always good to have the right producer. We’ve had certain people who had come along with us, you gotta have someone who’s stern, someone who has ideas. We like people who are actual musicians as well as producers, who can play the instruments, and they know the guitar, the piano, or whatever, they know how to sing, they can come up with ideas and back them up.”

Listen to our full chat with Kelliher right here or in the player below.