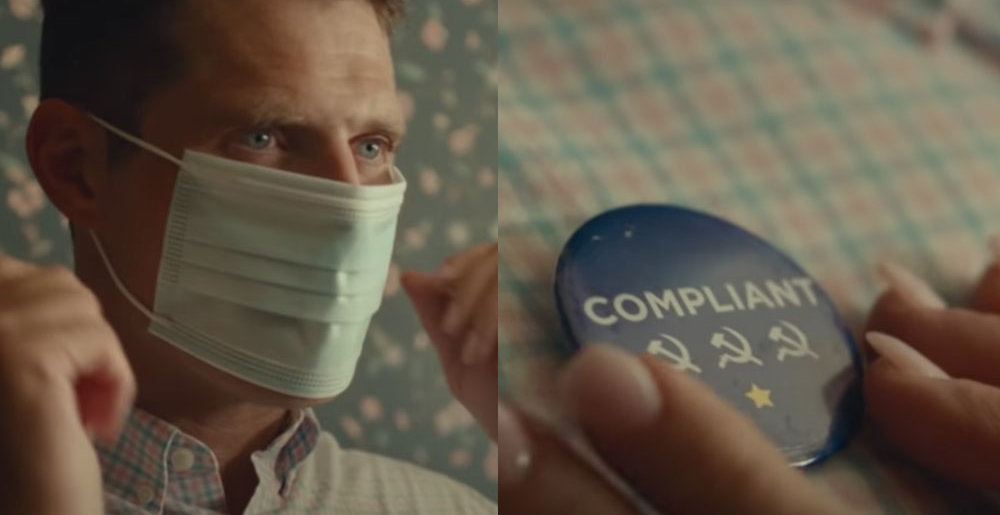 See if you can follow its clever, sophisticated narrative:

We’re then whisked to a room where a group of people are lined up before a goulish-looking woman, whose clothes, jewelry, and general demeanor imply she’s a one-percenter, wearing a pin with the Chinese flag and the word “EXEMPT.” She walks up and down the line, insisting her subjects wear face masks. Once they’ve agreed to do so, they’re rewarded with a pin featuring the hammer and sickle and the word “COMPLIANT.”

Elsewhere, men do manual labor in blue “Peoples Republic of the United States” jumpsuits with an American flag where the stars have been replaced with more hammers and sickles.

Meanwhile, the woman then takes her gimps (one of whom is in a mask of Knucklehead, FFDP’s mascot) for a walk. She loses control of the gimps, however, when they attack an ice cream truck after seeing a real American flag (i.e. one with stars). This tips off nearby pedestrians that the woman is a villain. Said pedestrians revolt against the woman… but not before tearing off their face masks.

The revolt, of course, includes members of Five Finger Death Punch, such as a flag-bearing Zoltan Bathory. Lots of these freedom fighters are shot down and killed. Then we learn — cue the Twilight Zone music — that the whole thing has been a nightmare suffered by George Washington when he fell asleep while signing the Constitution.

Gee, I wonder what it is they’re trying to say???

Still, to release a video at this point in history telling fans they’re sheep if they wear face masks is SO FUCKING IRRESPONSIBLE as to be maddening. Are the members of FFDP really so stupid as to instruct followers to risk their lives and the lives of others in the name of “freedom”? Maybe they’re just over being in a band and are clandestinely attempting to ensure that no artist is ever able to tour again. Either way, they’re incredibly selfish.

You can watch the Nick Peterson-directed video below, but you’ll be a stupider human being for having done so.

FFDP recently parted ways with longtime guitarist Jason Hook, who has been replaced by Andy James (ex-Sacred Mother Tongue). What are the odds Hook jumped ship because he didn’t wanna influence people to accidentally kill themselves while supporting an aspiring autocrat?

*I assume Ivan Moody thinks Emerson is the author of the Where’s Waldo? series.

Metal Sucks Greatest Hits
1220 -
MetalSucks Exclusive: One Year Later, Peter Steele’s People Speak About His Life, His Music, and His Last Days
0 -
What If Metal Album Covers Were Truthful?
0 -
Dimebag Darrell’s Grave Desecrated and Robbed by Shitty Local Band
0 -
The Secret 2 a Successful Career in Music
0 -
L.A. Band Threatin Faked a Fanbase To Land a European Tour No One Attended
3160 -
Down With The Sickness: God Forbid’s Doc Coyle Takes on Mainstream Metal