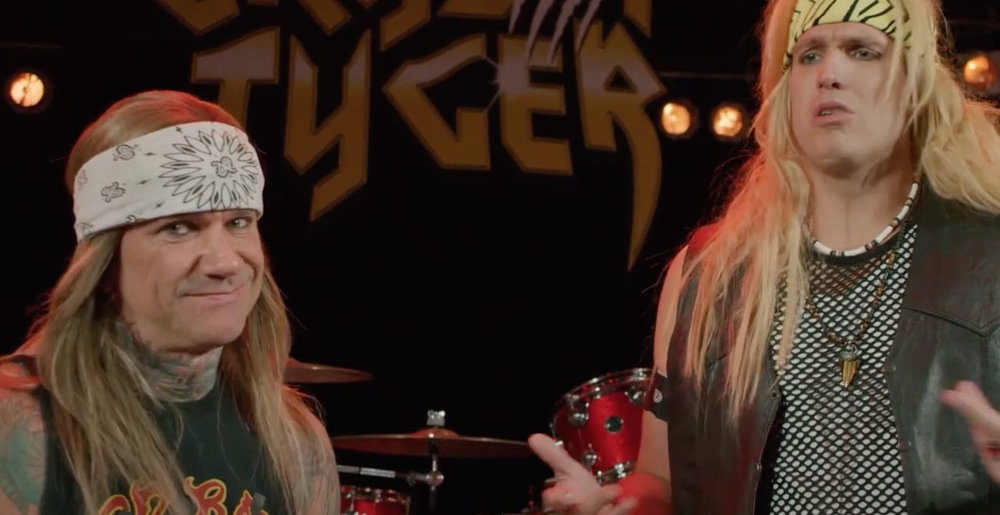 Three of Steel Panther’s four members appear as part of the fictional band Crys////p Tyger in a new campaign for Del Taco, the Mexican fast food restaurant which (I believe) exists primarily in the western United States.

Bassist Lexxi Foxxx is absent from the two spots, which is a bummer, because Lexxi is hilarious, but also totally tracks, seeing as he’s often portrayed as the other members’ punching bag.

Meanwhile, singer Michael Starr portrays the band’s bassist, while guitarist Satchel (playing a Cholula hot sauce guitar that may be a tribute to Michael Anthony’s famous Jack Daniels bass) and drummer Stix Zadinia retain their usual positions. The lead singer is a character called Crys P, and Del Taco have gone so far as to give him accounts on Instagram, Facebook, and Twitter.

You can watch both ads below. The first one is honestly not all that interesting, but the second, longer one, “No I in Tyger,” features a silent performance from Zadinia that is absolutely aces.

Steel Panther are now writing and recording custom songs for fans willing to pay $7,500. You can learn more about that here.

Metal Sucks Greatest Hits
400 -
Danzig is Just Cleaning Up His Motherf*cking Bricks, Bitch
0 -
Iudicia is Your New Favorite Band
0 -
The Red Chord’s Guy Kozowyk is a Police Officer Now
0 -
Hallowed Be Thy Game: Brütal Legend is a Love Letter to Heavy Metal
0 -
BREAKING: Joey Jordison Back in Slipknot as Percussionist!
0 -
Former Attack Attack! Bassist John Holgado is the Stupidest Human Being Ever