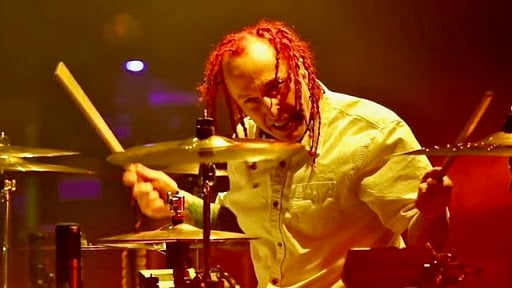 OMG u guise, how good is the new Sevendust album, Blood & Stone? It was basically the first thing to pull me away from having Van Halen on 24/7 rotation for two weeks, and since then, I’ve been listening to it, like, a lot. I really think they nailed this one; it’s probably their best record since Cold Day Memory ten years ago.

Speaking of Sevendust: the band’s drummer/screamer, Morgan Rose, will keep the party rolling next month when he releases his debut solo EP, Controlled Chaos. A newly-released teaser for the EP, which you can check out below, suggests it’s definitely gonna appeal to us 7D fans — especially those who like the band’s heavier side. There’s a lot of emphasis on Rose’s raw, primal drumming, natch, but those guitars sound nice n’ gnarly, too.

Also worth mentioning: there are no vocals in the teaser. That doesn’t mean there won’t be vocals on the EP, but it also certainly could be instrumental. Or a mix of both! WHAT SURPRISES WE HAVE IN STORE!!!

Alas, we still don’t know when in November Controlled Chaos will be released… but it will not be the first solo outing from a member of Sevendust this year: guitarist Clint Lowery has already put out both a full-length, God Bless the Renegades, and an EP, Grief & Distance. These dudes have had a productive year!

Blood & Stone is out now on Rise Records. Stream it below Rose’s teaser, and buy it here.