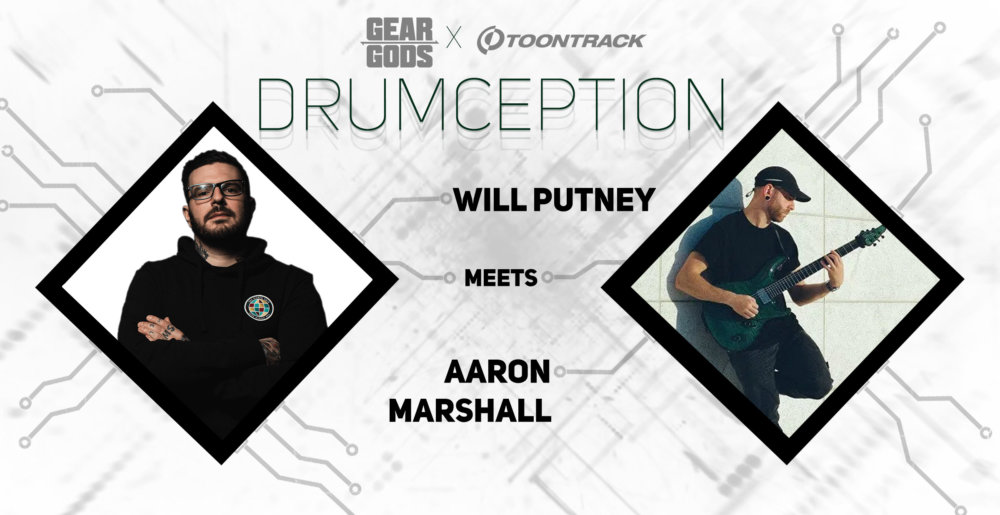 Episode #2 of Drumception 2020 is here, pairing up drums by producer/mixer/engineer and Fit For an Autopsy songwriter Will Putney with Intervals mastermind/guitarist Aaron Marshall!

The drums for this year’s collaborations were written and recorded using Toontrack’s Modern Metal EZX expansion for EZDrummer 2, which features tones crafted by Putney himself at his own Graphic Nature Audio studios in New Jersey.

Drumception is part of Toontrack’s annual Metal Month! Still to come are collaborations between Putney and Robb Flynn (Machine Head) and Kevin Antreassian (ex-The Dillinger Escape Plan), each writing their own song over the same drum track provided by Will.

As part of Drumception, we’re also inviting fans to write their own song over Will’s drums! We’ll choose our favorites and award prizes as follows:

You can download Will Putney’s drum track for your own use RIGHT HERE. The only rule is that you can’t change the drum arrangement at all. Entries will close on November 30 at 11:59pm EST. Submit your entry using the form at Gear Gods!

Every year since 2016, we’ve partnered with the audio software wizards at Toontrack for Drumception, which pairs a well-known metal drummer with several famous guitarists. What would happen if Gojira drummer Mario Duplantier wrote a song on the drums, then sent it to the likes of Brendon Small (Dethklok), Testament’s Alex Skolnick, Code Orange’s Reba Meyers and more, so they could each write their own song on top of it? The fun comes in hearing how each guitarist interprets the drum track in a completely different way to make an entirely unique final song. The following year we enlisted Megadeth’s Dirk Verbeuren on drums before flipping the script on its head in 2018 by asking fans to write their own drums to a guitar groove by TesseracT’s Acle Kahney, and then we returned to the original concept in 2019 with an in-house drum track programmed using Toontrack’s new orchestral percussion pack (the results were epic).

This year’s drummer is Will Putney, who needs no introduction, but we’re gonna give one anyway: besides being a founding member of and primary songwriter for Fit For An Autopsy, Will has produced hundreds of records for metal bands you know and love, including Body Count, The Acacia Strain, Pig Destroyer, The Ghost Inside, Psycroptic, Thy Art is Murder and on and on and on.

Exclusive 0
We’ve Got an Exclusive Presale for In Flames’ Upcoming Tour With Fit For an Autopsy, Orbit Culture, and Vended
June 15th, 2022 at 12:00pm Emperor Rhombus

Get your exclusive presale code here!

The Swedish melodic death metallers are back in a big way.