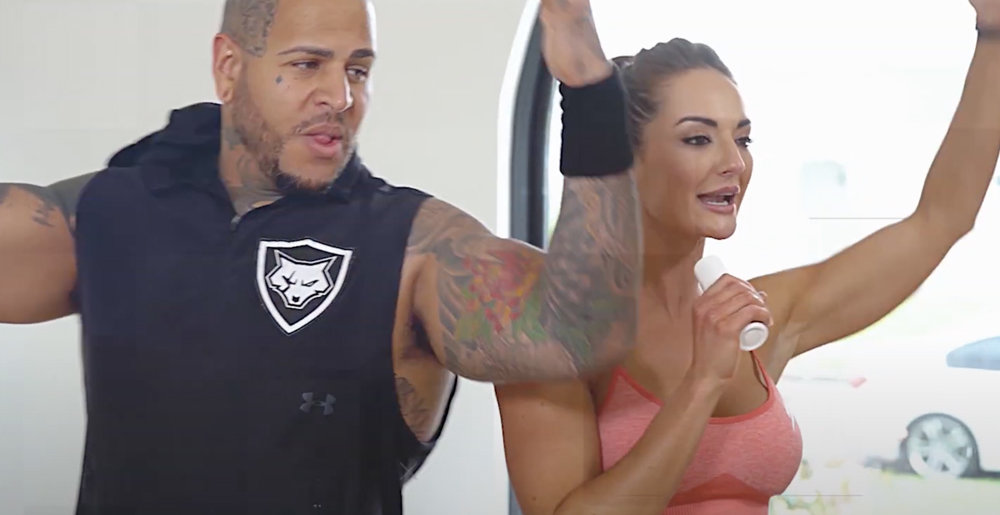 Update, 1:31pm EST, December 9: Vext has now issued an official statement regarding these allegations. You can read it here. He also published a handful of comments on social media, which you can see here.

In a series of Superior Court of California documents obtained by MetalSucks, Johns, who turned 30 on November 29, alleges that Vext, 38, assaulted her numerous times “both during and after the relationship.” She claims that the singer hit her in the face with enough force to draw blood, dragged her by the hair, and put her in a chokehold for a sufficient amount of time that she nearly lost consciousness, among other accusations. She goes on to say that Vext “knows where I live and I am terrified for my life,” claiming that he has verbally threatened to kill her more than once.

In addition to temporarily filling in for Five Finger Death Punch singer Ivan Moody during a 2017 tour of Europe, Vext has also fronted Snot, the Westfield Massacre, and Divine Heresy. He was fired from the latter band in 2008 after allegedly assaulting its guitarist, Dino Cazares, and Cazares’ then-wife, Jennifer Pagan Cazares.

In those documents, Johns says that she and Vext dated for nine months and lived together for two weeks.

During that time, Vext and Johns appeared in a multitude of videos for Omax Health (previously known as Prevention Pharmaceuticals), which describes itself as “a science based, health and wellness company focused on developing premium quality nutraceuticals.” Vext also praised Johns’ skills as a trainer on Bad Wolves’ social media pages at least once, although he gave no indication that their relationship was romantic.

On January 1, 2020, Johns alleges, Vext “struck [her] in the face… hard enough that [she] cut the inside of her lip and her nose and [her] lips were bleeding profusely.” She claims that Vext then took her to her home, “refused to leave her residence, then choked her as he verbally threatened to kill her.” Johns’ “lips were swollen and bruised for the next three days and she was forced to cancel all Client meetings as a result.”

She alleges that he hit her in the face again on January 14.

On February 29, Johns claims that as she was preparing for a photo shoot, she got into an argument with Vext, during which the singer threw water on her face — twice. When she “instinctively scratched [Vext] in self-defense,” he became angrier and “tackled her to the ground, put his hands around her neck, and choked her while slamming her head into the ground [for] ten to fifteen seconds,” nearly rendering her unconscious. Subsequently, Johns went to stay with her mother in Utah, “as she feared for her life, and missed a week’s worth of work appointments as a result.” This, according to Johns, marked the end of her romantic relationship with Vext.

The final incident is said to have taken place on April 11. This time, according to Johns’ attorney, Alphonse F. Provinziano, Vext “choked [Johns]‚ dragged her by the hair, and put her in a chokehold until she almost lost consciousness”:

“On April l0, 2020, [Vext] called [Johns] and stated that he wanted to kill himself and begged her to come to his residence. Feeling guilty and concerned, [Johns] went to [Vext’s] residence to console him. The parties watched a movie and [Johns] stayed overnight; the parties were not intimate.

“On April l1, 2020, [Vext] asked [Johns] why they could not resume their dating relationship. [Johns] attempted to leave [Vext’s] residence but he blocked the door and stated he wanted to finish the conversation with her. [Vext] is 6’ 1” tall and approximately 260 pounds.

“When [Johns] attempted to calm [Vext], he mentioned a male friend of [Johns’] and lunged at her. She fell off the couch where she was sitting as [Vext] began to choke her. [Johns] screamed as the windows were open and she hoped that the neighbors would hear her. [Vext] then grabbed [Johns] by the hair and dragged her into his bedroom where he placed her in a chokehold. [Johns] almost lost consciousness when [Vext] appeared to realize what he was doing and let her go. [Johns] quickly collected her belongings and left the residence. [Vext] left visible finger marks on [Johns’] neck, and bruises on her chin and neck. [Johns] suffered from swollen knots on her head and had neck pain for several days after the incident.

“[Johns] immediately went to the local police station which was closed due to the Covid-19 pandemic but called the police who responded with paramedics. The police went to [Vext’s] residence but he had left; when they called [Vext], he stated that he was with his lawyer. An Emergency Protective Order was issued on April 11, 2020 due to this incident, but it could not be served to [Vext] as he could not be located.”

“In addition to these incidents, [Vext] has threatened to have [Johns] killed, ‘send people after’ her, get her Instagram account, which is a critical part of her business, deleted, and otherwise ‘delete’ her. [Vext] has also left disparaging comments on [Johns’] Instagram account, which is visible to to her clients, potential Clients and business partners, and fans. (See Exhibit 5: [Vext’s] Comments on Petitioner’s Instagram Account.) Moreover, [Vext] stated to [Johns] that he has a friend in the Los Angeles Police Department who will quash any reports made against [Vext]. Finally, when the couple were dating, they made video recordings of themselves having sex. Respondent has threatened to release those recordings to the wider public.”

Evidence offered in support of these claims included time-stamped photographs of Johns’ injuries; an e-mail from Vext in which the singer allegedly “admitted to ‘setting off a nuke’ on social media and then deleting those comments, as they were made ‘in poor taste’”; screenshots of those comments; and a message from Vext to Johns (below) in which the frontman alleges “that [Johns’] brother had assaulted his wife and that [Johns] is the same way.”

Johns’ request for the restraining order was partly granted, with her “request to stop posting on social media and not to disseminate personal info” denied for being “potentially overbroad.” The terms of the restraining order mandated that Vext neither contact nor come within 100 yards of Johns.

A hearing was initially set for May 8, but was continued multiple times both due to both the coronavirus pandemic and requests from Vext’s lawyer, Bruce Moss. The hearing finally took place on November 17.

On November 3, Johns’ attorney filed a motion to dismiss the testimony of another personal trainer, Brad Brisbin, for being “irrelevant [and] based on hearsay,” alleging that Brisbin is a disgruntled former employee who “did not personally witness or have personal knowledge of the relationship” between Vext and Johns. Moss had indicated an intention to call Brisbin “as a witness to provide ‘information he discovered on the Internet.’” Counsel for Johns presumed this to be related to an online escort ad which illegally used personal photos from a hacked cloud account belonging to Johns, and was therefore irrelevant to the matter at hand (especially because, according to Johns, Brisbin knew the ad to be fraudulent).

Following the hearing on November 17, Johns’ attorney filed another brief, this one claiming that Moss, acting on behalf of Vext, “erroneously reported to the court that there had been ex-parte communication by Counsel for [Johns] with the Court” — in other words, that Johns’ lawyers had had private communication with the judge to which Vext and his legal team were not privy. Had there been any ex-parte communication, it could have been considered a violation of ethics that, depending on the circumstances, may have forced the judge to recuse themself and lead to disciplinary action against Provinziano.

The next hearing in the case is scheduled for Wednesday, December 9.

Representatives for Vext did not respond to MetalSucks’ request for comment.

Metal Sucks Greatest Hits
660 -
KNEEL BEFORE THE POWER OF ELEPHANTS MARCHING RIFFS
0 -
Paul Di’Anno: Still a Winner
0 -
Website Photoshops Dogs in Place of Bass Guitars Because Why Not?
0 -
Today in Dream Theater Shirts: Metalhead Veterinarian Fired for Bestial*ty
0 -
The Top Ten YARLERS of All Time
710 -
Metta Mind Journal with Cynic’s Paul Masvidal: Hair Identity and Being Yourself