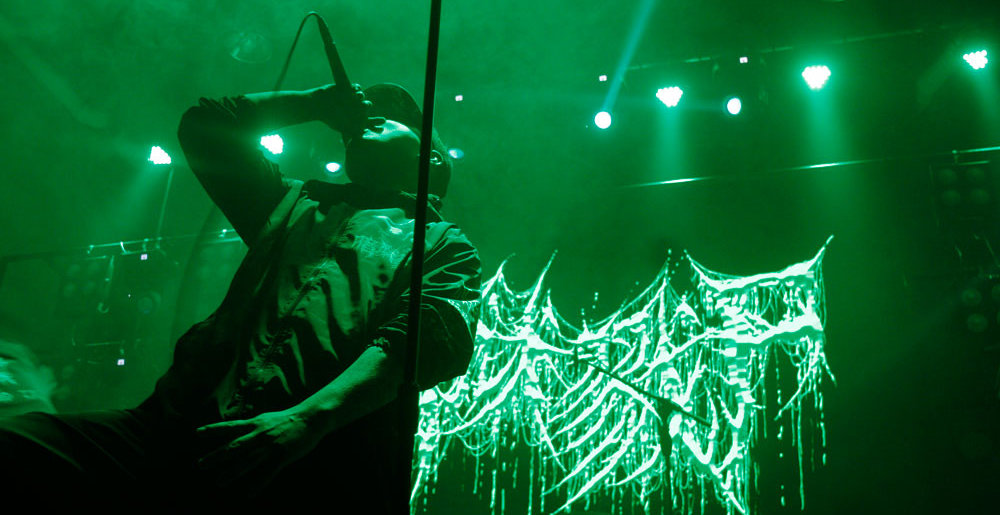 The Five Most Brutal Metal Bands in China

The following is a guest post written by Ryan Dyer.

Cigarette smoke fills the room as concertgoers wait for a band to take the stage at an event called “Gore Feast” at a dingy club in Beijing, China. There is a jumbo-sized maxi pad dripping with blood hanging off of a microphone stand.

A vocalist wearing a tight blue gown and an inflated rubber lifesaver from the kid’s swimwear section of Wal-Mart prances onto the stage and starts dancing wildly, yipping lyrics and grinding the mic stand like it’s a steel phallus. His bandmates wear matching blood-soaked maxi pads on their faces like Bane-styled anti-germ masks. As the performance goes on, the singer’s clothes come off, and by the last song only a pair of little boy undies and a tampon stuck up his ass remain.

The group is Chinese pornogrind band Cave Have Rod, who have since disbanded, but plenty of footage of their antics remains (search for their set at the Obscene Extreme festival). At shows such as this one, just a few dozen people out of the 20+ million who live in Beijing could take inspiration from one another and exchange ideas amidst the country’s notorious environment of censorship, participating in the darker, more extreme side of China’s musical underbelly.

While the genres of slam, grindcore and brutal death metal are not as popular in China as folk, thrash or death metal, there is still a scene that is very much active with fans who are enthusiastic about the most extreme sounds a guitar, bass, drums and a vocalist can produce. Have a listen and shout “NIU BI” (fucking awesome) at your computer screens as I recap five of the most brutal bands China has to offer.

The Chinese godfathers of slam, Tianjin’s The Dark Prison Massacre, have been at it since 2005, cementing a name for themselves as a must-see band if you ever visit China. They consistently show that break-neck riffs and bestial vocals know no borders, as they turn any live house into a cyclone of limbs with massive circle pits and walls of death. A danceable Pantera-esque groove is The Dark Prison Massacre’s forte, while on their latest EP, Conviction, they have shown that they are keen on progression by incorporating Egyptian soundscapes into the mix. Thematically, they stand against corruption and the arrogant domination of oppressors. Slamming, brutal death metal is obviously a universal language, as The Dark Prison Massacre have built a large overseas fan-base despite never touring Western countries.

Straight from the mean hutongs of Shandong Province, which is known for Tsingtao beer, comes your new favorite Chinese export. Armed Conflict are a band of relative newcomers with a streetwise look, wearing bright colors onstage with a logo behind them which has a welcoming, innocuous floral design. Looks can be deceiving, though. A bloody saw blade spins just behind the flowers, and their music is an especially brutal, guttural tapestry. Their 2019 EP, Crucify for Violence, is a heap of “thugslam” deathcore riddled with squeals that are not as much pig-like as they are the sounds of ravenous worms feasting on a severed arm in the soil beneath a patch of pansies.

Rectal Wench’s influence comes from darker realms of entertainment, be it gore films or extreme pornography. Their name comes from the Lividity song of the same name, while the band is heavily influenced by acts such as Gut. Wearing butchers’ outfits on stage complete with luchador wrestling masks, the band attacks the audience as if they were open anuses to a spear-embedded dildo. In previous iterations, Rectal Wench wore ski masks in which they resembled a band of burglars ready for a vile home invasion. Now, with wrestling masks, the band resembles a bloodthirsty tag team ready for a hardcore match on stage. The band has been quite active as of late, opening for Waking the Cadaver on their Beijing date and putting out tracks on various split albums in 2019/2020.

If you want it done right, it’s best to do it yourself. And in a country such as China, where it’s difficult to find like-minded individuals who are connoisseurs of old school grindcore, starting a one-man project may be the only way to get shit done. From Zibo, Shandong province, talented grinder Gore Geng has created Impure Injection, a project which is as relentless as an acid splash on bare skin. Influenced by bands ranging from Repulsion to Exhumed, Impure Injection work as a two-piece live, Geng taking shredding and frothing duties with the help of a live drummer. The 2019 Genetically Modified Utopia album is one of the most ferocious pieces of media to come out of the country.

I don’t often listen to deathcore, but when I do, I prefer it as brutal as possible. Stabbing, a relatively new band, pulverize with lower than low, molasses churning slabs that provoke audiences to look like zombies in slow-mo with sludgy headbanging. They fancy themselves as “downtempo deathcore” who take the genre to its primitive basics, bringing to mind cavemen bashing each other on the head with clubs rather in place of fancy hardcore dancing. Their songs are texture- and sample-filled, giving the listener a glimpse into the band’s personality and philosophy (such as mocking religion in their song “Darkness”) before the brutality takes heed. Lend your ears to a stabbing…

New Stuff 0
Revocation Have Us Seeing Red with “Nihilistic Violence”
September 11th, 2022 at 9:00am MetalSucks

News 0
Nick Holmes: Death Metal Lyrics Are “Like Another Instrument to Me”
August 29th, 2022 at 12:50pm Hesher Keenan

Incomprehensible or not, Holmes says there’s more to lyrics than just words.