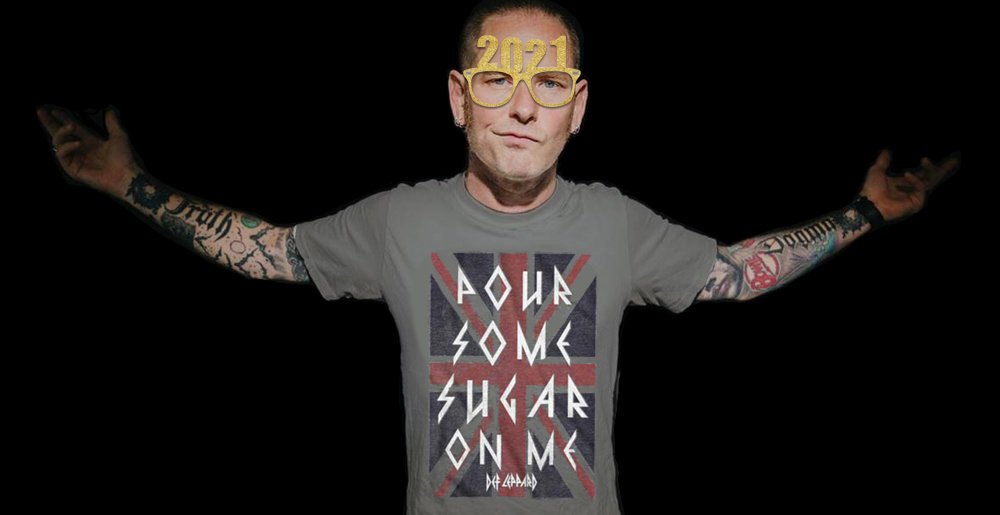 Welcome to the first Corey Taylor story of 2021! I’m sorry it took us four days to get to it. Inexcusable, I know. It shall never happen again, I promise.

ANYHOO, speaking of the New Year, Corey Taylor has revealed his 2021 New Year’s Resolution. In typical Corey Taylor fashion, it’s an excellent one: he wants to give up sugar!

Why has it been so hard for our beloved Core-Core, a demi-god who seems to be capable of pretty much anything to which he sets his mind? The Slipknot singer sez:

“Maybe it’s because I’m surrounded by it because I have kids – it makes it a little tougher. Plus my sweet tooth is also just so ridiculous: I once filled a red Solo cup with peanut butter and a half bag of M&Ms and ate it like it was a bowl of cereal… this is the kind of person you’re dealing with (laughs). I’m not amateur – I’m a professional fat-ass!”

It’s kind of an insult to fat-asses for Corey Taylor to call himself a fat-ass, since his ass is not at all fat. Having said that, if Corey were to be a fat-ass, he’d surely be the fattest-assed of them all. He’d be the gold standard in fat-assism, as he is the gold standard in all things. I mean, that M&M/peanut butter concoction does sound delicious.

Of course, we have nothing but total faith that Corey will be successful in his mission.

Corey recently said that Slipknot were “thinking about putting another album out” this year. Fingers crossed that happens. In the meantime, the band thinks they’re touring Europe in the summer. They’re not, but here are dates anyway.

Metal Sucks Greatest Hits
0 -
Photos of Metal Musicians When They Were Kids
0 -
The Top 25 Modern Metal Frontmen: The Entire List in One Place
0 -
Exclusive Interview: Damien Echols of The West Memphis Three on His Life After Death
0 -
Why I’ve Stopped Buying Vinyl
0 -
Which Bands are “The Big Four of Death Metal”???
350 -
MetalSucks Exclusive: Jeff Loomis’ First Interview Since Leaving Nevermore