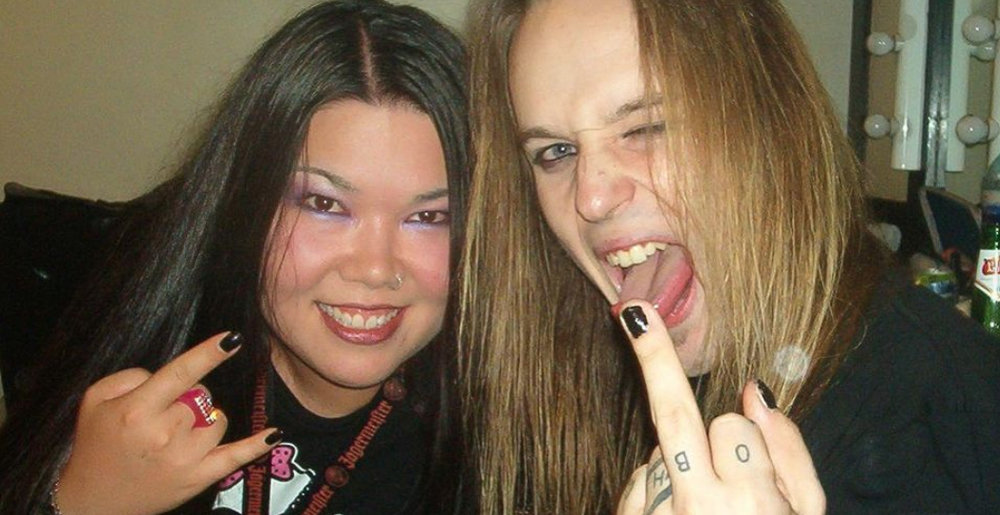 As the metal world continues to reel from the death of Alexi Laiho, two more notable figures have paid tribute to the late musician: his ex-wife and Sinergy bandmate, Kimberly Goss, and Daniel Freyberg, who played guitar alongside Laiho both in the final iteration of Children of Bodom and Laiho’s post-CoB project, Bodom After Midnight.

First up: Sinergy vocalist/keyboardist Goss, who was married to Laiho from 2002 – 2004, and reportedly remained on good terms with the guitarist/singer even after they split. In a message posted on Instagram — alongside some touching photos taken with Laiho in happier times — Goss calls Alexi “My first true love, my band mate, and my best friend,” and says that he has now been reunited with Sinergy drummer Tommi Lillman, who died in 2012:

“My first true love, my band mate and my best friend. The silver lining throughout this entire pandemic is that we were given the gift of having so much quality time together. Our marathon FaceTime calls, the endless text messages and phone calls at all hours of the day and night will stay with me forever. I am so comforted by the fact that we were able to reflect on our lives together both on and off the stage and to cherish our continued friendship that has remained in tact for all these years. Allu, my heart is both full and broken at the same time. Not many people are able to have nothing left unsaid with someone whom they had such a long, rich history with. You gave me peace and left me with zero regrets in the months and weeks before your tired body finally gave out. I thank you so very much and I’ll love you forever and always.

“You and Tommi are together again and I can hear the joy and laughter coming from the two of you, as if it were yesterday. You will always remain in the hearts of us who knew and loved you and your legacy will live on forever in the music you blessed the world with. Close your eyes my darling. You’re asleep now and finally at rest.

“I love you Allugator,
“-Kimberly (or ‘Kani’ as you affectionately called me)”

Freyberg also posted a message on Instagram along with a video and photo of himself with Laiho. Says the guitarist:

“’We’ll play together until the grave.’

“Your words to me not that long ago. I just never thought that the day would come this soon…It was an honour to play alongside you Alexi. You were one helluva talent, a legend who created magic and raised the bar to the next level.

“I feel grateful and privileged that our paths crossed and we became friends and eventually ended up playing together. An adventure that gave me so much and will always stay in my memories.

“It’s so devastating to write this because every time I try to type something I start crying… I know there won’t be a single day that goes by where I wouldn’t miss you. My heart goes out to your family and loved ones. Sleep well brother, see you on the other side ????”

You can view both Instagram posts below. More tributes from notable metal musicians — including members of Megadeth, Lamb of God, Testament, and Arch Enemy, to name but a few — can be found here.

Laiho was 41-years-old when he passed away. Although no cause of death has been made public, a press release from Laiho’s label, Napalm Records, says that Alexi “had suffered from long-term health issues during his last years.”

Laiho and Freyberg — along with Paradise Lost drummer Waltteri Väyrynen and bassist Mitja Toivonen — had been in the studio recording Bodom After Midnight’s debut album prior to Laiho’s passing. The status of those recordings is currently unknown. The band made their live debut on October 23, 2019 at Rytmikorjaamo in Seinäjoki, Finland.