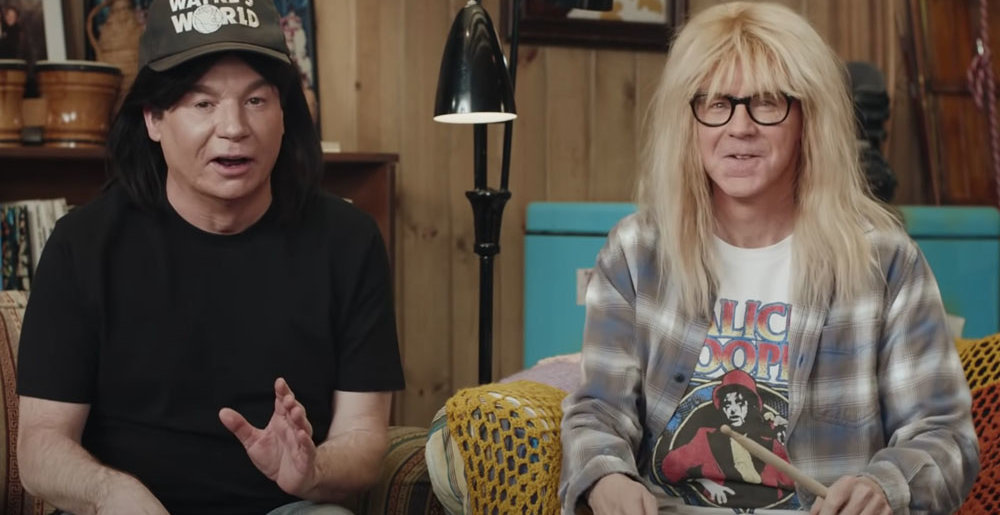 In January, I predicted that 2021 would seen the announcement of a Wayne’s World 3. As it turns out, I wasn’t too far off.

Stars Mike Myers and Dana Carvey have reunited to once again the beloved metal-lovin’ duo Wayne and Garth… albeit only for a Super Bowl ad for Uber Eats*. I’m sure the Wayne and Garth of 1992 would approve.

You can watch the Uber Eats spot below. Super Bowl LV will take place this Sunday, February 7 at 6:30 p.m. EST, and will air on CBS.

This isn’t the first Wayne’s World reunion — Myers and Carvey have reprised the characters on several occasions, including appearances on Saturday Night Live in 2011 and 2015 and an episode of Frozen star Josh Gad’s web series, Reunited Apart, this past December. That episode is also available for your viewing pleasure below.

*At least for now — I still think there will be a Wayne’s World 3 at some point, especially in light of Bill & Ted Face the Music‘s favorable reception this past summer. Hollywood just doesn’t leave money on the table.

Sponsored Links from Across the Internet
Show Comments
Related Articles
Metal in the Media 0
Excellent: Mike Myers and Dana Carvey Are Pals Again
February 12th, 2022 at 9:23am Emperor Rhombus

Mike Myers and Dana Carvey are back for another ‘Wayne’s World’ spot, this time shilling for Uber Eats.

MSTV 0
If You Had to Chose One, Would You Choose Freddy Krueger, Jason Voorhees, or Michael Myers?
October 31st, 2017 at 1:33pm MetalSucks

MS contributor Emperor Rhombus takes to the streets of New York and the memorabilia-covered walls of the legendary Duff’s Bar to ask metalheads that very question.