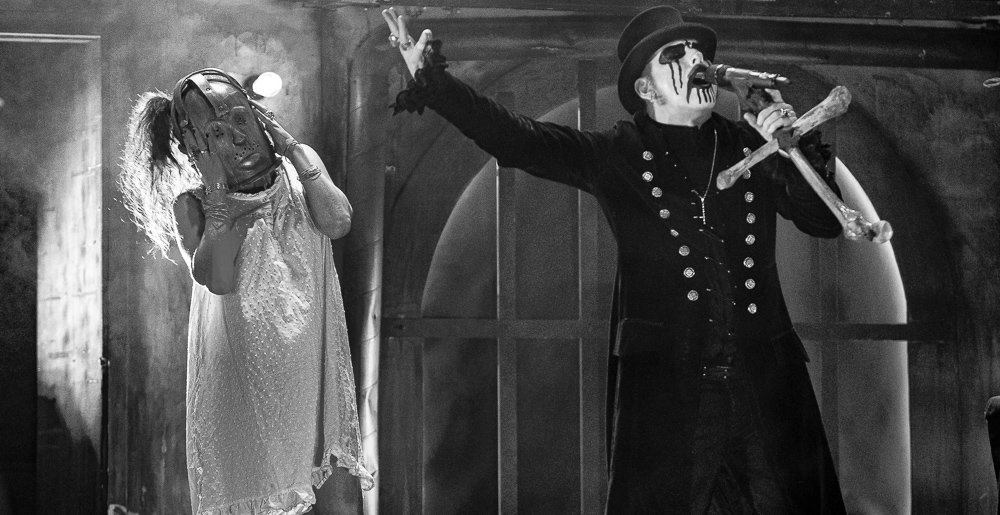 King Diamond is not letting the pandemic or age (he is 64) slow him down. The singer is currently working on new music for both his eponymous band and Mercyful Fate, collaborating with the key members of each for what he promises will eventually be new albums “by the time we can go out and tour again.”

“For King Diamond, it’s an album that’s gonna be called ‘The Institute’, which is part one of two — there’ll be two full albums that will be completing a full story. And as the title [suggests], there’s gonna be some crazy weird stuff.

“And for Mercy, I also have the title, but I’m not giving it out to anybody at the moment. We have the front cover for the new Mercy too. It’s very correct, very right for Mercyful Fate. It’s very back to basics.”

“For my part, with both Mercy and King albums — even more King Diamond, I would say — all vocals are gonna be lead vocals again, like they were in the old days. It didn’t matter if there was a choir singing on the right side or the left side, or whatever, they would still go and pick up parts of the lyrics to progress the story and so on. So it’s gonna be anything goes with the vocals, for sure — back to the old style.

“And for Mercy too, it’s gonna be very old-fashioned — Hank is writing very much like the old days. And it’s nice to feel that we can capture that again. So that’s two albums that are being worked on that will be done by the time we can go out and tour again, I’m sure.”

King Diamond released a new song called “Masquerade of Madness” in 2019, which you can stream below, saying at the time that The Institute would come out in 2020.

One of the new tracks will be a studio version of “The Jackal of Salzburg.”

The incident that happened to King Diamond sounds terrifying.