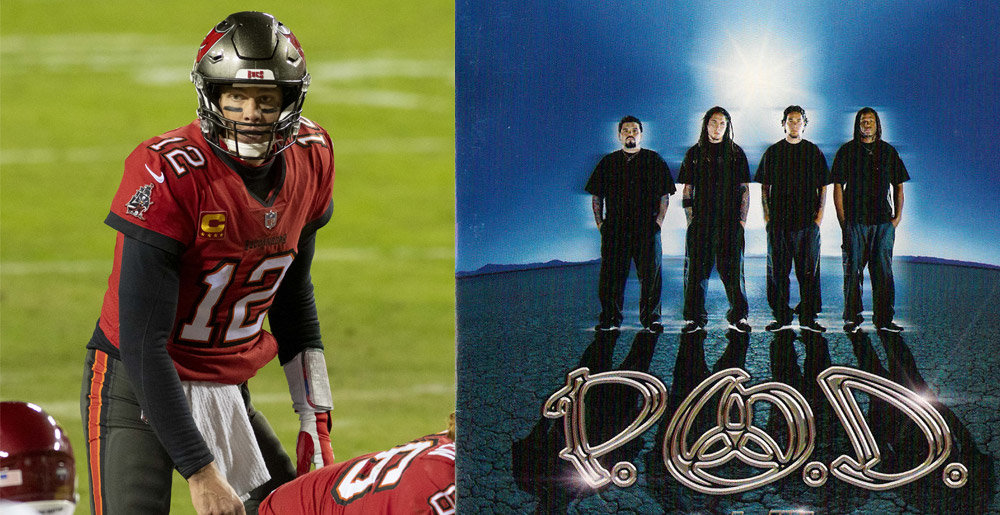 Tom Brady Rocked Out to P.O.D. After Super Bowl Victory

Dunking on Tom Brady is a pastime in which anyone not from New England is all too happy to indulge, as regular and accepted as Christmas songs dominating the radio in December or as your daily morning crap. I don’t regularly watch football anymore, but I did watch part of the Super Bowl, and despite Tom Brady’s stellar performance at age 43 — and his entire career, the guy’s incredible, you can’t deny it — I’ll never not grab the low hanging fruit of a good Brady jab.

Same goes for nu-metal. It’s too easy, sure, but it’s fun!

And so: shortly after The Tampa Buccaneers’ historic victory at Super Bowl LIV, Brady rocked out to P.O.D. As Luke Combs would say, it’s a match made up in heaven, like good ol’ boys and beer.

How do we know this nugget of football trivia? Brady posted as much on his own Instagram account.

Among photos from the game accompanied by songs by Blink-182 (“What’s My Age Again?”), 50 Cent and Nelly, the quarterback shared a photo of defensive tackle Ndamukong Suh with his massive arms wrapped around an opponent while P.O.D.’s 2001 hit “Boom” played. Clever one, that Brady.

You can watch a condensed clip of all of Brady’s post-game Instagram musical selections, including P.O.D., below.

Sponsored Links from Across the Internet
Show Comments
Related Articles
News 0
Ozzy to Perform During an NFL Halftime Show Next Week
September 4th, 2022 at 10:39am Hesher Keenan

Get Ozzy some extra padding from the locker room, please.

He’d been kicked out of the venue and wanted revenge on the security guard.

Metal Sucks Greatest Hits
0 -
France’s Got Talent, too: Beautiful French Girl Performs Heavy Metal Song on TV
0 -
Slipknot’s Corey Taylor Shares Photo of “Post-Gig Make-Up Debacle” Beneath His Mask
880 -
The Looks That Kill: God Forbid’s Doc Coyle on the Role of Image in Music
2510 -
Rose Funeral: The Uno Incident?
7590 -
If I Read One More Thing About Arcade Fire I Am Going To Puke
1570 -
Frankie Palmeri’s Track By Track Breakdown of the New Emmure Album: A Track By Track Breakdown