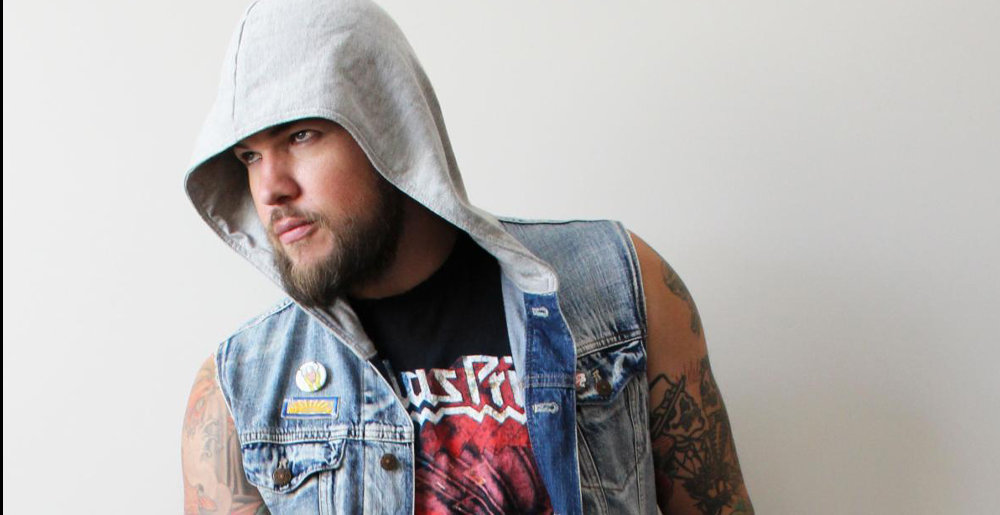 Modern heavy metal revivalist James Durbin is the latest to share his most prized threads for our My Metal T-Shirt Collection series! The former Quiet Riot vocalist will release The Beast Awakens, the debut album from Durbin, tomorrow, February 12 on Frontiers Music Srl (order here). Have a listen to the album’s debut single, “Kings Before You,” featuring Chris Jericho (Fozzy) and Phil Demmel (Vio-lence, ex-Machine Head) as you browse through Durbin’s favorite t-shirts below.

Hardcore Superstar has been one of my favorite bands since discovering their brand of “street setal” in 2009. My love for their music led me to be able to record an unreleased song of theirs that was left off of their 2007 album, Dreamin’ in a Casket. The song was titled “Outcast,” and I would go on to recruit Mick Mars (Mötley Crüe) to guest on the track with me.

I got this shirt at HCSS’s first L.A. concert in over 10 years at the Whisky a Go Go in 2015. I have an attachment to this particular design, as it’s a take on Jimbo Phillips’ famous “screaming hand” logo for Santa Cruz Skateboards/NHS, which can be seen everywhere here in our hometown of Santa Cruz, CA.

I got this vintage-style raglan in 2011 at The Hollywood Bowl at the Stevie Nicks and Rod Stewart show. At that time I was a contestant on American Idol and my new friend, Chris Jerich,o was a contestant on Dancing with the Stars (both shows film in the same studio building). This was one of several occasions where Jericho snuck me out of the back of the Idol hotel (we weren’t supposed to leave lol).

This shirt would come in handy at the end of the concert. After getting mobbed by a horde of AI abd DWTS fans, we got to the valet to get Chris’s car. When he returned the car, the back end was smashed in. Long story short, we used this shirt to tie the trunk shut, at least until he dropped me off at the hotel. I’ll never forget that night.

As a fan of music, my tastes go from metal and rock to pop and classic country. One of my wife and I’s favorites on the country scene has always been Mr. Alan Jackson, this “Chattahoochee” shirt definitely helps. This one definitely earns some high-fives at shows. We got the chance to see Alan Jackson perform back in 2012 or ‘13, and he played through a fever, which could have meant the cancelation of the concert, but Alan insisted that “the show must go on.” That’s a pro.

If someone were to ask me where I see myself in five years, hopefully I’ll be floating down the river, boots on, strumming my 6-string, singing and drinking Hazy’s the whole way down!

This Y&T shirt is from their 45th anniversary tour, on which I played five shows with them. On the last show of this tour, which took place here in my hometown of Santa Cruz, CA, I talked with their drummer of fifteen years, Mike Vanderhule, about working together on a project. Mike would end up being the drummer on my The Beast Awakens, and he just flat-out killed it on every track.

I would also wear this shirt for that last show of the tour, when I joined them on stage to sing backup on “Forever” from their classic ’82 album Black Tiger.

A Band of Orcs

My favorite death metal band, which happens to be from right here in Santa Cruz, CA! This shirt was a gift from their leader and spiritual guide, Gronk! Shaman, giving to me at the time of my pardoning. Gronk! Shaman is featured in Durbin’s music video for “The Prince of Metal” as well as the visualizer for “Kings Before You,” summoning the vocal prowess of Chris Jericho with his Orc Shaman Magik. Another reason I love this shirt is that the art was commissioned to be illustrated by Dungeons & Dragons/Magic: The Gathering artist Chuck Lucaks, and proudly features the creed “Ugly is Sexy” on the back. Hail Gzoroth!

Last but not least is my beloved Judas Priest Screaming for Vengeance tee. I wore this shirt on the 2011 American Idol Season 10 finale, where I performed with the almighty Gods of Heavy Metal, Judas Priest. I also wore this shirt backstage when I got to try on Rob Halford’s sixty-pound spiked leather duster coat. Little did I know, that at that exact moment, Jack Black would turn the corner and stumble into this meeting of the metal masses. I asked Jack if he wanted to try it on next, of course he did! I got to crown young Jables with my own leather studded military cap, and thank the Metal Gods, there was a photographer on hand to capture it all. We all posed together for a photo, solidifying this once in a lifetime moment and making the already metal experience all the more memorable!