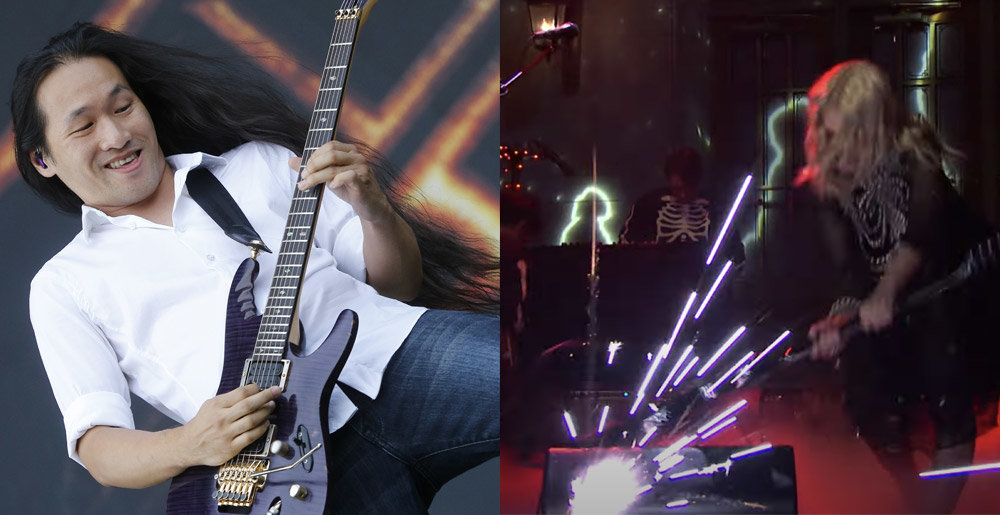 Singer-songwriter Phoebe Bridgers performed on last week’s edition of Saturday Night Live (February 6), but it was the last few seconds of her set that attracted the most attention, with the singer’s attempt at smashing her guitar drawing criticism of all kinds from throughout the internet.

DragonForce guitarist Herman Li chimed in on the matter on one of his live Twitch streams last week, offering his opinion as both an unbiased observer and as a professional performing musician. And Herman was mostly a fan of Bridgers’ performance… with one caveat.

Before we get to Herman, let’s take a look at the guitar smash itself. Cue the below up to 4:15 if it doesn’t start there on its own:

Back to Herman: the prevailing sentiment in his commentary was that of understanding: he spent a lot of time talking about all the effort that goes into producing an entertaining live show — he complimented Bridgers’ on her theatrical presentation and stage design, something DragonForce are also well-known for — likening smashing a guitar to gimmicks he himself has employed, such as playing a guitar while underwater and his patented guitar flips and kicks. He also noted that guitar smashing has an important lineage in rock history, starting with Jimi Hendrix, and that he understands calls to donate instruments to music education programs instead of obliterating them.

After praising Bridgers for several minutes, Li did have one bit of criticism, though. He said:

“If I’m gonna criticize this, the main problem I have is that the guitar is too cheap. It’s only $500 for that guitar. Next time she’s gonna smash up a guitar make it a $3,000 guitar. I’ll give her one of my $3,000 guitars. You can take one of my signature guitars, smash that up. How about that PRS [points to guitar behind him]? Take that PRS, smash that up, that’s like a $5,000 guitar. Come on, you’re on ‘Saturday Night Live,’ you can’t be smashing a $500 guitar, too cheap! you gotta take it to another level, smash it up, burn it, make it expensive! Annoy people even more!

“So, Phoebe if you’re listening to me, if you can watch this video, which obviously no chance you will ever see this video, you’re not watching my Twitch for sure. If you wanna smash up another guitar, let me know, let’s get you a real guitar to smash up. My last guitar sold for $16,000 [for charity], so maybe one of those.”

After a brief tangent about Jimi Hendrix, Li continued:

“She should’ve smashed more stuff up. Smash some of the mics up, go more full out, smash an amp. It sounds better when you smash an amp up, it’s more fun. You’re smashing a monitor, it doesn’t do enough.

“[Nevertheless], it’s a thumb up from me. And everyone else is probably gonna hate me now who were complaining about it. They’ll probably go, ‘Oh my god, Herman’s full of shit, he has no idea what he’s talking about.’ But that’s my take on it.”

What do you think of Bridgers’ guitar smash? Comment below, as if you needed an invitation.

Bridgers found herself in the metal headlines in a completely unrelated fashion last week: she was one of many woman who described abuse at the hands of Marilyn Manson, saying that when she was a teenager, Manson told her about his “rape room.” You can read more about that accusation here.

Megadick 0
Dragonforce’s Herman Li on Dave Mustaine Losing His S*** at a Roadie Mid-Show: “In His Defense, That’s Super Annoying!”
July 26th, 2022 at 9:43am Emperor Rhombus

“You’re doing a show, it takes you out of the game, you start making mistakes…”

Metal Sucks Greatest Hits
0 -
Review: Megadeth’s Super Collider is a Super Catastrophe
0 -
Is Facebook Trying to Extort Bands and Brands?
3220 -
What is UR Favorite Classic Nu-Metal Band??
820 -
Rigged: Dream Theater’s Mike Mangini Takes You Through Every Piece of His Mega-Drumkit [Part 1]
0 -
The Top 25 Modern Metal Drummers: The Entire List in One Place
0 -
Unearth are the Slayer of Metalcore