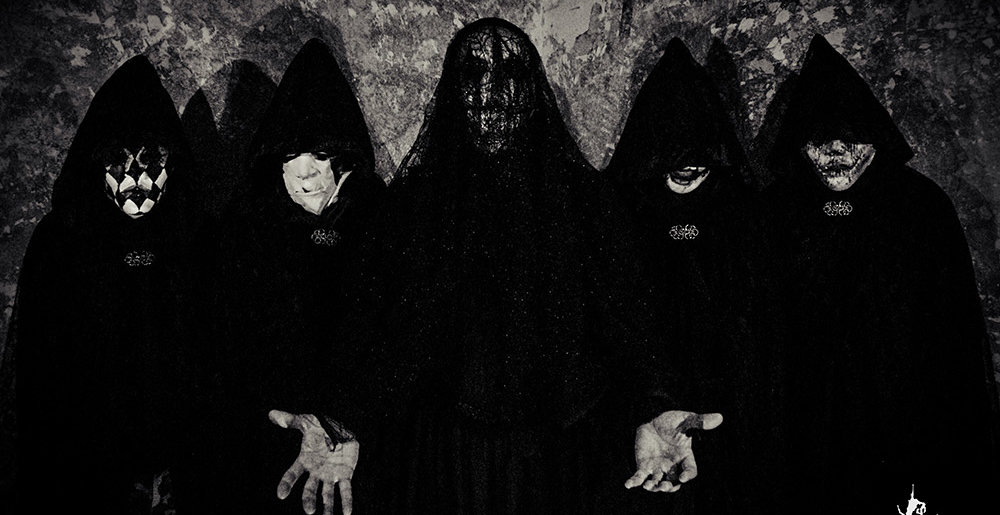 But some bands have found a way to get through all the red tape and make something of themselves in The Middle Kingdom.

Thousands of expats call this country their home, choosing to study or work in China. Some creative spirits even start bands, but in China it’s not as easy as inviting over a couple of friends to jam in the garage and playing a show isn’t as simple as phoning up a dive bar for open mic night and then driving down in the van. There is always a watchful eye on lyrical content as well; to mention sensitive political issues in your songs can lead to some scary consequences.

MetalSucks has spoken to three iron-willed expat bands based in China to learn about what it takes to make a name for yourself as a musician in the country.

Round Eye, a band based in the Shanghai megalopolis featuring members from several countries (including the U.S.), have earned a respected, though somewhat controversial reputation since their formation in 2012, but frustration has come with the territory since day one.

The self-described sexiest, hairiest and loudest band in China just released their new album, Culture Shock Treatment, and as veterans of the scene they’ve seen everything China could possibly throw at them, from sudden tour cancellations to frustrating visa issues. Those who visit the country for the first time are bound to suffer from culture shock, but nothing surprises Round Eye anymore.

“We are not surprised when another live music venue is shut down,” says bassist Livio, who, like everyone we’ve spoken to for this article, asked to be identified by his first name only so as not to be targeted by the authorities. “Or when foreign bands have to pay top dollar to be able to legally perform (the tiniest rock club or an arena apply the same rules) and foreign DJs don’t get this same treatment. We are not surprised when festivals, labels, clubs, hotels or even playlists exclude us and our music, almost as if we didn’t exist. We are surprised when we are treated like a regular band instead.”

Round Eye have been around long enough to command a decent amount of respect from the local crowds, but like all “regular bands” in China, a show or entire tour can be canceled by the authorities at the last minute. The band’s 2014 tour with The Boys was pulled by the Ministry of Culture, who took issue with the flyer. It portrayed a girl wearing a national scout league uniform while menstruating the names of the bands and the tour dates out of her vagina. “A beautiful piece of art, by the way. You just have to be aware of the risks. Nobody is ever ‘safe’ in China, no matter how insignificant you are, from any party official,” Livio warns.

Covid-19 has not helped matters, with venues routinely closing for days, weeks, or months due to sudden lockdowns brought on by new cases. The band’s January 3 show in Harbin, a city in Northern China, was canceled for this reason

Matt, the bassist of Beijing’s Scare the Children, echoes Livio’s frustrations. “Foreign or not, every band I know has had some shows canceled,” he says.

This expat nu metal/shock rock band has been around since 2014 and consists of French, Kazakh and Chinese members, but you’d never know by looking at their promotional photos or by watching their music video, “The Seduction of Little Timmy.” The band members each wear ghoulish masks and costumes, inspired by haunted dolls, which hide their identity. You’d think this would be an upside: the authorities can’t really put a face to the music if they disapprove of it, right?

Unfortunately the masks make matters even more complicated. “On the administrative side, it is actually more convoluted,” Matt explains. “Before any major show we have to prepare a lot of documents, like pictures of us and videos of us rehearsing without our masks and even the inspection of our masks and costumes before the show to be sure that they won’t be ‘offensive.’ Finally, [we have to sign] waivers promising that we won’t disturb or incite any bad behaviors.”

Scare the Children’s anonymous aura has worked somewhat to their advantage, though, in spite of the added bureaucracy. On stage, they aren’t viewed as foreign, Chinese, or an act from any specific time or place, but as an immersive experience. “For some shows it’s somewhat easier as there’s not so much bullshit linked to being foreigners,” says Scare’s guitarist, Antoine. “It has helped us sometimes, but this year some of the most compliant venues still won’t have us anyway. Also, there’s still a lot of bullshit to deal with even if you’re a Chinese band, so masks aren’t that big of a help.”

Sometimes it’s the genre itself which makes it hard for expat musicians to find footing. Shanghai’s Alpaca play a dense, sludgy, misanthropic form of stoner doom. “I don’t know if there were any bands before Alpaca in Shanghai that played slow heavy metal,“ remarks their guitarist, David.

In finding like-minded members, the stars had to align perfectly for David and company. “Because the crowd of foreigners in China is like a revolving door (due to work contracts ending, or visas – student or otherwise expiring), the fact that we’ve been able to find each other and stick to it is really a testament to how much we care about the band and the genre.”

Turning towards bands from outside of China’s borders, the act of bringing in foreign bands for a Chinese run is a daunting one. The visa paperwork is one obvious obstacle, but the ever-looming threat of show cancelations just days before the event scares off many acts from even trying.

“When we and our label (Dying Art) brought Eternal Elysium from Japan to China, their Shanghai show was canceled a few days beforehand,” relays David. “We scrambled and organized a secret underground show at a rehearsal space we regularly used, but when it was all over and we went outside, there was a police cruiser waiting for us on the corner. At the Beijing show the next night, we found out that a guy who came to the show was a police mole with an ankle-bracelet, and if he had seen anyone spark up a joint, everyone in the bands, fans, and rehearsal space owners would have gotten in big trouble.”

Resiliency is the name of the game, and even if the band can’t get into the country, as was the case when Alpaca attempted to bring EyeHateGod to China, a compromise can be found.

“Javier [vocals], whose life goal was to play with EHG, contacted a friend — Masa of Bad Moon Rising Records — in Taipei, where nobody needed visas, and it ended up being much smoother in the end.”

Round Eye have managed to assist several punk outfits in coming to China, including The Boys, The Fleshtones, The Dickies, The Descendents, Twink, and No Fraud. They know firsthand that it’s no simple task to put events together.

“The level of difficulty in bringing a band to tour China is multiplied tenfold” compared to putting on local shows, says Livio. “Starting from the basic paperwork to transportation to accommodation costs… That’s why it’s so important to bring in bands that understand the struggle and are eager to ease the process of it all before and during the tour.” Logistical challenges can be daunting, and Scare the Children have noticed it’s gotten even more difficult over the past few years. “There have been changes to what it entails to get visas, permits, contracts, not to mention the performers fee to the cultural bureau,” says Matt. “Also, when playing in different cities, the hotels have to be three star minimum and be able to accept foreigners which makes the booking very complicated to the organizer. As we are veterans in the Chinese music scene, we have some friends who help with this, but it is becoming increasingly difficult.”

Livio suggests that a lot of bands also steer clear because they can’t bring additional touring personnel required to put on a show at a level they expect. “The fewer the band members, the better it is for everyone. Bringing roadies, supporting bands, or sound engineers from home is a bad idea, too.”

Assuming all of the above goes well, there’s still the process of gaining government approval. Alpaca’s David explains, “All bands with at least one foreigner in them must report to the Ministry of Culture. We have many times both passed and gotten the application rejected for shows. Most of the time, that just means changing a few lyrics (puppies, sunshine, and lollipops instead of death, gloom, and misery), and they’re none the wiser, but rejection could mean waiting another bunch of months to book a show.”

Even if there are seemingly no problems at all, anything can happen. In the past four years, a number of venues have closed in Beijing, causing the live music landscape of the city to shift dramatically. “Authorities are starting to actually enforce some licensing or noise rules, and some venues were closed as a result. Some also went out of business. It’s unfortunate but that’s the hand we’re dealt,” says Scare the Children’s Antoine. “China is still a rapidly changing country, and you have to adapt. I’m not really one to complain about how it was so much better before or what. The landscape changes, and you roll with the punches. We’re not gonna stop or go down in self-pity because it’s not so easy to play sometimes. We just play.”

The Chinese music market is more or less homogenized, but there are many creative expats living in the country. For those wanting to be the next Scare the Children, Alpaca or Round Eye, Livio has some sound advice: “Make friends with Chinese bands and put up a show together. That’s the only way you can play without any trouble. Go to jam session nights and find a live music venue that lets new bands play (and suck). If you do it long enough, you’ll eventually get better and you will be able to play bigger stages or even out of town.”

Antoine adds that playing beyond the expat audience is challenging, but rewarding. “Speaking the language or at least having good social skills is important. Use Chinese social media in Chinese, unless you want to be a ‘for expat only’ band that only ever plays the same few venues, which is cool too, and a lot of fun for sure. But being in China, we naturally feel we should direct our efforts towards the Chinese people rather than a small circle of fellow expats.”

Scare the Children’s vocalist Sadako gives a final pep talk to prospective foreign musicians in China: “Buckle up ’cause the easy times are in the past. Don’t try to please foreigners; be part of the Chinese scene. Create relations with the ones who work hard to make metal alive here. They are few and far between but they are awesome. And practice, practice, practice.” He ends with a credo to not let ‘the man’ get you down in spite of all the opposition in China: “BE DIFFERENT!”

If you liked this article about metal bands in China, also check out the following by author Ryan Dyer:

Featuring Dressed to Kill, Witchseeker, Hell Freezes Over and more.