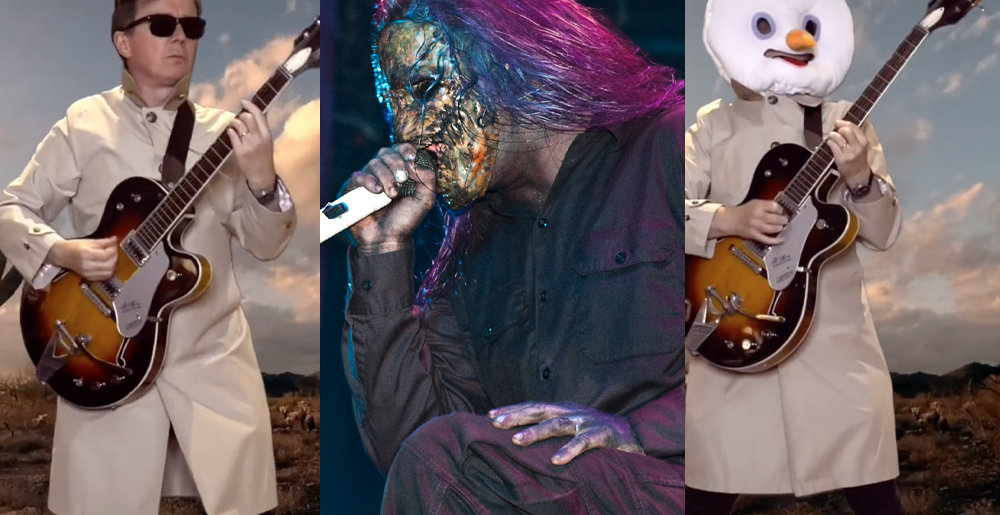 I wonder what it’s like to be Rick Astley. Your name has become a verb — and not in a positive way — and your life’s work has been turned into the ultimate meme. It’s gotta be enough to drive a dude mad, right?

…and, oh yeah, there’s this one, where he “covers” Slipknot’s “Duality.” By which I mean Astley mimes playing the song on guitar while the studio recording plays, as though he were making a music video.

In some parts of the video, he is doing this while wearing a giant snowman head.

In no parts of the video does he convincingly appear to have learned how to play “Duality” on the guitar.

Thing is, Astley apparently really is a fan of the song. In a 2016 Classic Rock listicle of his ten favorite rock songs of all times, Astley cites “Duality” alongside Metallica’s “Nothing Else Matters” and Rammstein’s “Sonne”:

“This is a bit of a weird one, because obviously a lot of people’s perception of Slipknot if you’re not really aware of them is ‘Oh, it’s those guys who wear the masks.’ Which is very, very true; that is a lot about what they’re about, their identities being hidden all these years and all the rest of it – even though we kind of know what the singer Corey [Taylor] looks like. Or I do anyway, because I’ve seen stuff of him on YouTube going out doing his acoustic gigs and all the rest of it, which is a bit weird after all these years.

“The thing with them is they actually write really great melodies, it’s just sometimes the thing that comes out for a lot of people who aren’t into [metal] – and it’s not my genre, I’m not saying that – but I’m saying of various things that I’ve looked at that they’ve done on YouTube and what have you, this one just stands out to me as being a great song. They’re quite unconventional [in] the way they write songs sometimes, but it’s just a brilliant track. When I’m in my room thrashing about on my drum kit with my headphones on, it’s one of the tracks I like to play. I forget what their drummer’s called, but he’s just a ridiculous drummer as well.”

(In 2016, Slipknot’s drummer was called Jay Weinberg. But the drummer on “Duality” is called Joey Jordison. I dunno which one Astley is talking about.)

You can enjoy this extremely strange video below. And if you happen to know Rick Astley, well… maybe check in with him, make sure he’s alright?

Metal Sucks Greatest Hits
0 -
This Dude Sounds EXACTLY Like Layne Staley
0 -
Ex-Attack Attack! Vocalist Caleb Shomo is Smarter than John Holgado
0 -
Rigged: Nile’s Karl Sanders
0 -
Op-Ed: When Did Slayer Start to Suck?
0 -
Why There Will Never Be Another Metal Band as Big as Metallica
0 -
Slipknot’s Corey Taylor Shares Photo of “Post-Gig Make-Up Debacle” Beneath His Mask