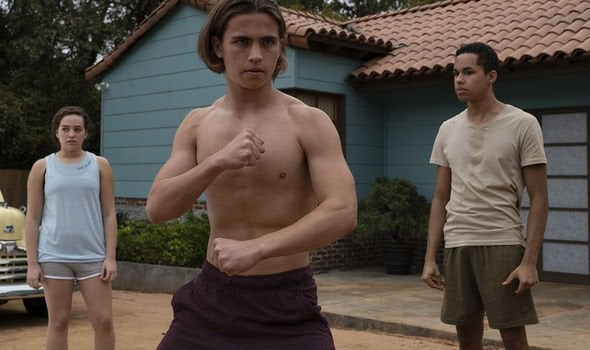 Cobra Kai star Tanner Buchanan — who portrays Johnny Lawrence’s son Robby Keene on the hit Netflix series — has something in common with MetalSucks: a mutual adoration for Corey Taylor! And a deep love of metal, of course.

In addition to his love for Taylor and all things Slipknot, the 22-year-old revealed in a recent interview with At Large magazine that he loves Pantera, who he says are his favorite band of all time. While he describes Gojira as his second favorite, he says that his own old band, Acidosis, used to cover several of their songs.

On Gojira in particular, he offered:

“My friend in the band says, I have a good name: Acidosis. So the band was Acidosis. We played a lot of Gojira covers, which I’m super excited about, because ‘Cobra Kai’ posted the show playlists on Instagram. Now my all-time favorite band is Pantera. But my second all-time is Gojira, a French-prog metal band. They ended up following me on Instagram and I had a freak-out moment. I had been listening to them since I was 12. We knew all their songs. Played all their songs. And they followed me on Instagram. I had this out-of-body experience, like, ‘Gojira, they know who I am. They know who I am!’ This is my childhood right here.”

Been there, buddy! I remember the time when Joe… ah, screw it, I don’t wanna embarrass myself.

Shifting his attention to Taylor, The One and Only Metal Jesus Himself, Buchanan said:

“I just want to be Dave Grohl’s best friend because he’s such an awesome guy. Same thing with Corey Taylor. He’s another guy I would just super freak out about if I ever got to meet…. Him going from Stone Sour to then Slipknot, it was definitely a change in pace. A band of four or five to a band of, what, nine or ten? And they’re all wearing masks. You’re like, what is going on? But I do enjoy the music. I just like Corey Taylor a lot. Corey Taylor’s my guy.”

WE FEEL YOU, BUDDY!

Speaking to Cryptic Rock back in 2019, Buchanan spoke more about his love of metal:

While Cobra Kai‘s soundtrack has leaned heavily into the metal of the ’80s, perhaps we’ll see Robby Keene dive into the newer, harder stuff when season four rolls around, melding Buchanan’s on-screen life with his reality.

Metal Sucks Greatest Hits
180 -
On U.S. Vs. European Record Release Dates
0 -
Video: Rings of Saturn Guitarist Lucas Mann’s Criminal Abuse of Guitar Pro
0 -
Photos of Metal Musicians When They Were Kids
1730 -
Leyla Ford’s Eleven Cardinal Rules of Attending a Concert
0 -
Exclusive Interview: Lamb Of God Drummer Chris Adler on Randy Blythe’s Imprisonment, Upcoming Tour and the Future of the Band
0 -
Worst Year Ever: All of Our 2012 Year-End Sh*t in One Place