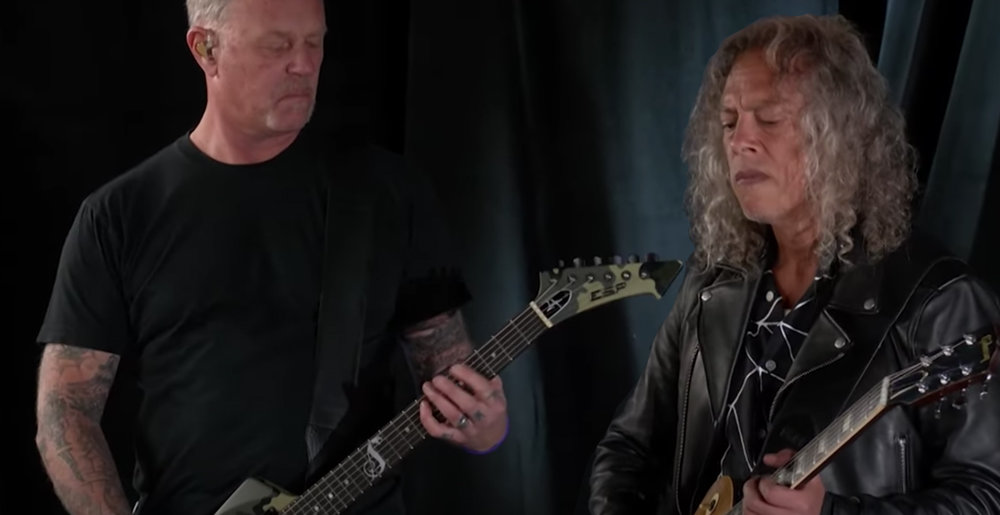 Metallica’s James Hetfield and Kirk Hammett performed “The Star-Spangled Banner” before last night’s game between the Golden State Warriors and the L.A. Lakers. I believe this is the 10,721,945nd time the duo have performed the national anthem before a sports event for one of their hometown teams; 8,271,945 of those times were specifically for the Warriors.

Still, if you’ve somehow never seen them do this before, or just really love seeing them do this over and over and over again, there’s a video of the blessed event available for your viewing pleasure below. James Hetfield frequently seems really pissed at his guitar, which amuses me for whatever reason.

Alas, the performance — which included an amp bearing the Warriors’ slogan, “Strength in Numbers” — didn’t help the team any: they lost by 31 points.

Last week, Metallica both celebrated the 35th anniversary of Master of Puppets with a performance on The Late Show with Stephen Colbert and donated $75,000 to help feed those affected by the recent winter storm in Texas and its surrounding southern states which. The storm left millions without power and water due to an extended period of uncharacteristically cold weather.

The band are currently deep into “some pretty serious writing” for their next album. After first floating the idea of working on new music while under quarantine in April, by June Lars Ulrich had revealed that Metallica were, indeed, in writing mode. James and Rob have both said they’ve been busy working on new songs, too, and Kirk Hammett has trumpeted the fact that he has over 600 song ideas recorded (after infamously losing his cell phone with 300+ ideas prior to the sessions for Hardwired). The band were having some technical issues collaborating over the internet and were looking into doing so in-person in a bubble last they checked in, but that was months ago already, and Lars recently revealed that new material was coming along at a “glacial” pace.

Metal Sucks Greatest Hits
880 -
The Looks That Kill: God Forbid’s Doc Coyle on the Role of Image in Music
370 -
The Top Ten Worst Hair Metal Band Names
0 -
Rigged: Jeff Loomis
0 -
What If Metal Album Covers Were Truthful?
930 -
The Austerity Program’s Justin Foley and the Search for the GREATEST TACO RIFF OF ALL TIME
0 -
Website Photoshops Dogs in Place of Bass Guitars Because Why Not?