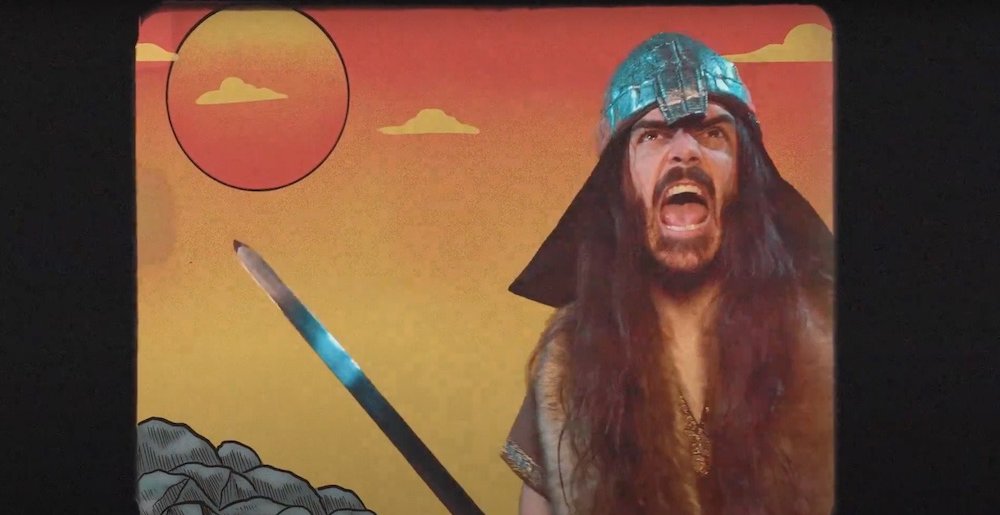 Crobot, the world’s #1 trad metal band devoted entirely to the celebration of Cronuts, have released a new song, “Mountain.” It’s notable for a) featuring a guest appearance by perpetually-happy Anthrax bassist Frank Bello and b) being INSANELY catchy and fun. Like, when you hit “play,” there’s a 50/50 you will be magically transported to a parking lot with a warm sick pack of PBR. I mean that as a compliment.

As a bonus, the song’s accompanying video, which was directed and edited by Wombat Fire and features art by Chris Bishop, is also really fun. It plays like a cheap parody of a Manowar video. Again, I mean that as a compliment. The clip delighted me.

“We’ve grown to know the Anthrax dudes pretty well through touring and developed a working relationship in addition to our friendships. We’ve always talked about writing with Frankie because we have a lot of the same influences and that definitely shines through in ‘Mountain.’  Frankie has always lent us his ear and has been a big supporter of ours – it was a treat to work with him on something.”

You can check out “Mountain” below! The song will appear on Crobot’s newly-announced EP, Rat Child, which drops June 18 on Mascot Records. In addition to Bello, it features guest appearances from Howard Jones (Light the Torch, Sion, ex-Killswitch Engage) and Stix Zadinia (Steel Panther); the latter musician co-wrote “Everyone Dies,” the song on which he appears. As explained by Yeagley:

“One of the last tours we did was supporting Steel Panther. We hit it off with all of the guys. Stix even got tattooed by Bishop! We kept in touch and he sent us a bunch of ideas he had for songs. We really gravitated towards this piano instrumental he had called ‘Jimmy’s Piano Song.’ We don’t know Jimmy, but Stix must really love that dude…cause that shit brought tears to our eyes. Through a couple of Zoom sessions, we were able to work everything out and that’s how we wrote ‘Everyone Dies.’  We really wanted to venture somewhere different with this one but still pump it full of our personality.  This is our attempt to sit at the dinner table with Queen whilst eating a healthy portion of Meatloaf.”

In reference to the collaboration with Howard Jones, Yeagley offers:

“Howard was introduced to us through mutual friends. We have always been huge fans of his melodic footprint and his unique melodies. When we heard he would be interested in writing with us, we were beyond excited. He flew down to Austin and spent a few days in a studio with us. We had a such great chemistry with him and wrote ‘Kiss it Goodbye.’ We thought it was a shoe-in for being a track on Motherbrain but for whatever reason, it didn’t make the cut. It seemed like such a travesty to let such a great song sit on the shelf. So, we’re pumped to let the world hear it!”

Metal Sucks Greatest Hits
0 -
Thirty of the Worst Metal Band Promo Photos of All Time
0 -
Missed Connections: You Puked at the Ulcerate Show (M4M – Brooklyn, NY)
0 -
Chad Kroeger and Avril Lavigne Finally Wrote a Song So Awful that the Internet Has Collectively Rejected It
0 -
Give a Heavy Metal Valentine’s Day Card to Someone You Love
370 -
The Top Ten Worst Hair Metal Band Names
0 -
Navy SEAL Team Six Member: “I Wore My Demon Hunter Patch When I Blasted Osama bin Laden”