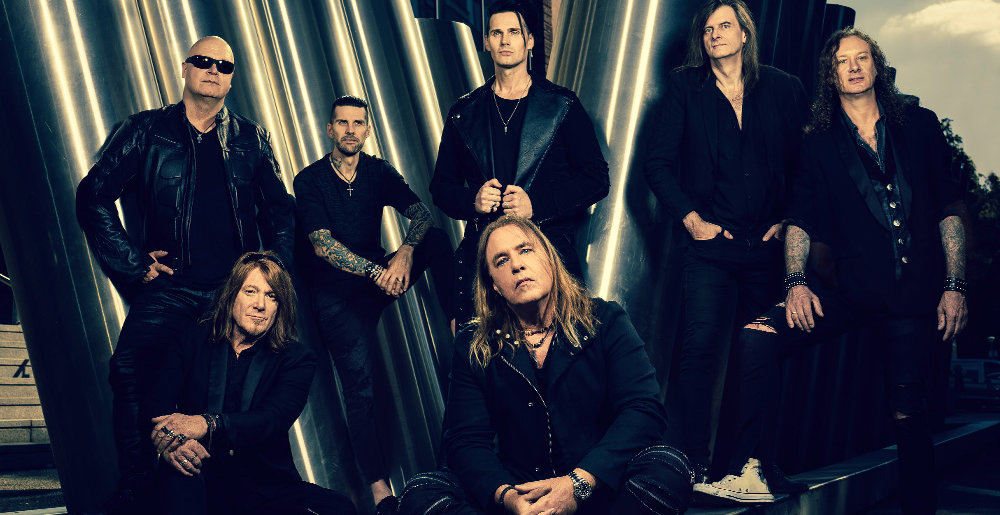 Helloween have released a new song and accompanying music video, “Skyfall.” It’s the first single since their forthcoming eponymous album and their first new song since expanding their line-up to once again include former singers Michael Kiske and Kai Hansen, thereby giving them nearly as many members as Slipknot and Mushroomhead.

The Martin Häusler-produced video consists of a lot of okayish video game cut scene footage, some pretty bad green screen, and the director’s audition reel for Iron Man 4, Tron 3, or really any job that will get him out of directing music videos for German power metal bands.

As for the song, it’s… whatever. This band isn’t my thing. I do think it’s funny that this seven-and-a-half-minute version is the “single edit” — meaning the real song is even longer.

I will give props to guitarist Sascha Gerstner… or, at least, his guitar. As a longtime fan of axes that are needlessly complicated in their design, I appreciate this ridiculous looking thing. (If it serves an actual purpose, I’m sure none of you will be shy about correcting me. But I’m guessing it serves no actual purpose.)

Watch the video below. Helloween is out June 18. It has very cool album art by Eliran Kantor, which you can view at the bottom of this post… even if, like me, you don’t dig this band, you gotta admit that’s a sweet cover!

New Stuff 0
Helloween Release New Single and Video “Fear of the Fallen”
May 21st, 2021 at 9:54am MetalSucks

The second single from their first album with three singers.

Metal Sucks Greatest Hits
1730 -
Leyla Ford’s Eleven Cardinal Rules of Attending a Concert
0 -
BREAKING: Slipknot Guitarist Mick Thomson Stabbed in the Head by Brother
0 -
Worst Year Ever: All of Our 2012 Year-End Sh*t in One Place
0 -
G.O.A.T. and Your M.O.M.’s “Quack like a Duck” Justifies Humanity’s Entire Existence
0 -
Video: Jon Bon Jovi Mangles “Livin’ On A Prayer” During Nashville Show Opener
0 -
Danny Worsnop is a Good Writer