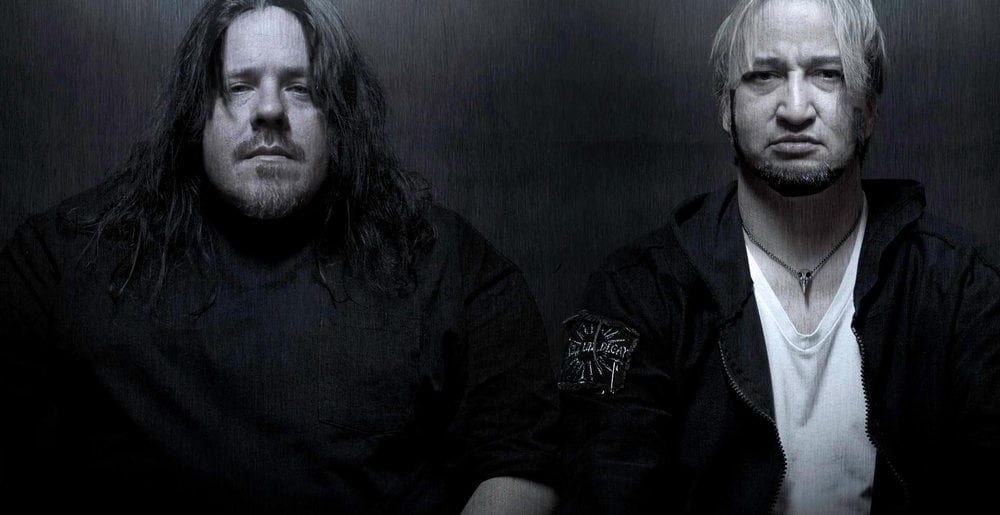 Burton Seabell Says Fear Factory Reunited in 2009 “For Money,” He and Dino Got in “Physical Altercation”

Burton Seabell has been a man of few words since quitting Fear Factory last fall. The vocalist has understandably mostly steered clear of FF-related topics while focusing on promoting new music from his main current band, Ascension of the Watchers, instead.

Which is why we’ve been able to get so much mileage out of this one chat with Metal Hammer. The same interview that gave us a juicy quote about Linkin Park’s Hybrid Theory being “Demanufacture for Kids” also saw Seabell talk at length about his relationship with Dino Cazares, which you might say is not the best at the moment following a legal battle that saw Dino eventually acquire 100% of the rights to the band’s name.

One segment of the interview focuses on why Fear Factory broke up in 2002 and then reformed later that year without Cazares. The exchange went as follows:

Fear Factory split in 2002. It was never clear why. What really happened?

What was he doing that was rubbing you up the wrong way? And maybe vice versa?

“Well, there’s a lot of personal things going on. I don’t want to go accusing people of anything, cos I’m not a psychologist, but the person he was becoming, I was just not liking. He was not being a nice person.”

You reformed the band without him a couple of years later. Was that an easy decision?

“No, it wasn’t. Raymond [Herrera, drummer] and Christian [Olde Wolbers, bassist] had to really convince me. They had a plan, but they had to really convince that everything was gonna work out. They said, ‘Well, he’s not going to be in the band any more, we got some new music, so what do you think?’ I was, like, ‘Well, I don’t know.’ I was not easily convinced.

“But I’d started Ascension Of The Watchers, but getting people interested in them was difficult, because labels would listen to the demo and go, ‘Well this doesn’t sound like Fear Factory.’ Well no shit, that’s why it’s called a different name.”

So did you rejoin Fear Factory without Dino for the greater good of Ascension Of The Watchers?

“For me, yes. To me to get anything out there, I felt like I’d have to do another Fear Factory record. I had a family on the way too, so I said, ‘OK, I’ll make this happen’, but I saw it as an opportunity to get the Watchers out there. That was where my heart was.”

Dino eventually came back in 2009, of course, and that’s where the quote you see in this article’s headline comes in:

There was another twist in the late 00s when Christian and Raymond left, and Dino rejoined. Was that down to money?

“It was. Sad to say. And when you do it for money, look what happened.

“I last spoke to Dino three years ago, maybe. He said some things to me that I was, like, ‘That’s fucked up…’”

Did you actually rekindle your friendship?

“You know, we did. A few years apart, I thought we’d learned something and changed. At first it was working well, but the hints of the old Dino were still there, and as time went by they just got more and more.”

You made three records, Mechanize, The Industrialist and Genexus, before things started going wrong again. What happened this time?

“And there’s this fourth one that’s supposed to come out as well. Everything started to go wrong during the recording of Genexus. Things started going awry. We got into a physical altercation during the recording, because he said something he shouldn’t have and I had to check him.”

That is, to my knowledge, the first time we’ve ever heard about a physical altercation between Dino and Burton. It’s also quite something to see him admit that he (or perhaps both parties) reunited in 2009 mainly for financial benefit.

Finally, an exchange about the lengthy legal battle:

If that wasn’t enough, there was an ongoing legal situation with Raymond and Christian that began in the early 2010s. That couldn’t have helped.

“No. We’ve been dealing with lawsuits since 2009 from those guys. They had such a tenacious lawyer.”

At any point, did the four of you ever think to sit down in the room and go, ‘We’re grown men, what the hell are we doing?’

“The four of us never got into a room. It was me, Christian and Raymond had some form of mediation – it was supposed to be the four of us, but Dino didn’t show up. I was there trying to hold my ground by myself.

“But it’s all that personal stuff and business stuff that really led to the end for me – after 30 years of it, I was, like, ‘Enough is enough.’ It never seemed to end.”

You announced in September 2020 that you’d left Fear Factory. What was the tipping point for you?

“I’d been thinking about it for a long time – four years, since the last record. Recording that new album, I was, trying to record and dealing with lawsuits and bankruptcies… it was all out of control.

“I personally filed bankruptcy nine years ago. But after that, the last round of lawsuits plus Dino’s bankruptcy made me go bankrupt again. It definitely broke me, financially.”

Was it easy to walk away from it all?

“Working with someone you don’t trust anymore and to be in a business where everyone’s coming after you… it wasn’t worth it. I was, like, ‘Fuck this, you can have it, take it all.’”

What was the last conversation you had with Dino about?

“I don’t know if I can tell you that. It was on a phone call three years ago, maybe. he said some things to me that I was, like, ‘That’s fucked up… that not only fucks you up personally but you’re fucking with the business at the same time.’ He’s said he’s reached out to me to call, but if you want to call me – don’t text me to call you. Fuck that.”

If Dino or Raymond or Christian walked into the room right now, what would you say to those guys?

“I’ve got no reason to. Not every friendship is meant to last. There’s an Ascension Of The Watchers song called Residual Presence, it’s about how nothing lasts forever.

“But those albums are part of my legacy. And Fear Factory fans, god bless them, when they go, ‘There’s no more Fear Factory’, I’m, like, ‘What are you talking about? There’s 10 fucking albums to listen to! And you only listen to two of ’em!’” [Laughs]

Cazares told MetalSucks last year that he acquired the sole rights to the Fear Factory name when “The name became available, and I got it.” He later discussed the issue further on Robb Flynn’s podcast, telling the Machine Head frontman, “Burt lost the other half [of the rights to the band’s name] and so I purchased it.” According to legal documents that surfaced in 2019, Seabell neglected to include his ownership of the Fear Factory trademark and trade name in his bankruptcy filing, which resulted in him eventually losing it, after which Dino snapped it up.

Perhaps in response to the Metal Hammer piece — and most certainly in reference to the legal proceedings in the above paragraph — Cazares took to Twitter over the weekend and tweeted the following:

“The people who talk shit about me don’t realize what I went through to put this record together, all the $ that I spent for FF to still exist, to keep it alive for the fans, and just for one asshole to shit all over it, because he lied in court and lost everything. I ❤️ FF

“Part 2) you are not the victim when you lie”