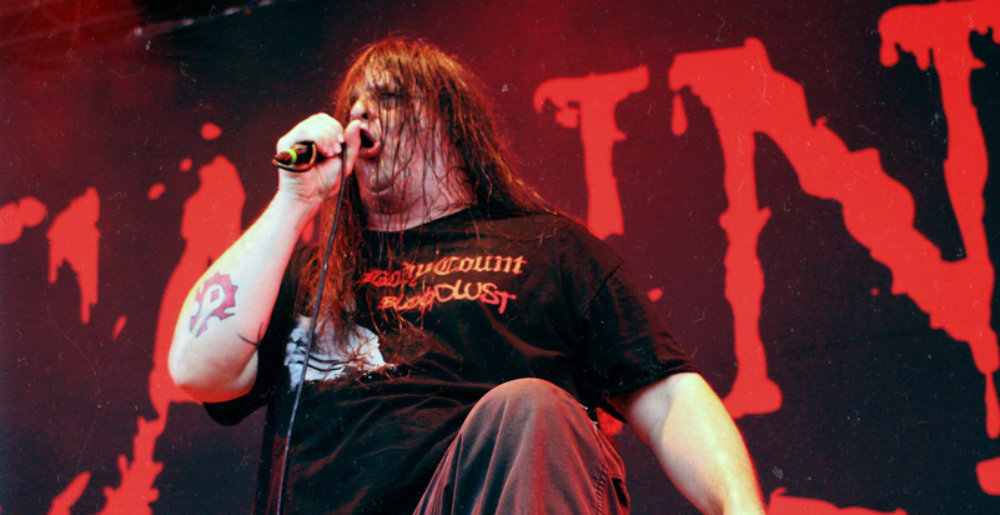 Corspegrinder Says the Internet Has an Unhealthy Interest in His Neck

I’ve never met Cannibal Corpse frontman George “Corpsegrinder” Fisher, but by all accounts he’s an absolute gem of a human who always gives fans the time of day. Aboard the 70,000 Tons of Metal cruise a few years back — a punisher nightmare for most metal musicians — I’d regularly catch ol’ Corpsey hanging out on the pool deck, by the bar or any number of other pedestrian locales, casually chatting it up with anyone who ventured to say hello.

And then there’s this, the ultimate proof that Fisher has the patience of a saint: his tolerance — nay, embrace — of the internet’s unending fascinating with his storied, gargantuan neck.

With the band’s new album, Violence Unimagined, currently in the zeitgeist, Corpsegrinder’s been doing tons of press, and indeed, this article is the second one on MetalSucks this week alone in which the man’s cervical prowess is the focus (“My neck’s my money-maker,” he told an interviewer previously). The latest sees Kerrang! ask the following: “Does the internet have an unhealthy interest in your neck?” — straight and to the point — to which he answers:

“Yes, a hundred percent. Everyone’s always asking about my neck and any person doing any neck exercises, I get tagged in it all the time. It’s crazy. There was a meme: ​‘No Valentine this year, maybe necks year’, which I thought was brilliant.”

Next, he responds to a question about his long-term neck health that invokes Slayer frontman/bassist Tom Araya’s late-career neck surgery, saying:

“I’ve had pulled muscles in my shoulder but, knock on wood, I’ve never had a problem in my actual neck.

“My neck has gotten bigger over the years and there’s no doubt it’s because of the headbanging. I must have been building muscle somehow with the way I do it but it’s just become second nature to me when we play shows.

“It’s funny you mention Tom Araya because when we toured with Slayer that was a lifelong dream. I cornered Tom one night when I was drunk. He’d said in an interview that not being able to headbang kinda took the fun out of it for him and that touched me. I had to tell him he was the main reason I headbang the way I do. His style is that side to side infinity shape, but it made me see headbanging like an artform.”

We’re extremely glad Corpsegrinder’s not only still got a sense of humor about his neck despite our “unhealthy interest,” but that its still in good health. Should he ever find himself in pain, might we recommend a Ring-Dinger™?

In the same chat from earlier this week referenced above, Corpsegrinder also spoke about his passion for claw machines, how he wins at them, and his charitable donations from the proceeds.

Cannibal Corpse’s new album, Violence Unimagined, has spawned three singles — “Condemnation Contagion,” “Murderous Rampage,” and “Inhumane Harvest” —  and it’s out now via Metal Blade (order it here). The band is “hopeful” they’ll be able to tour in the first half of 2022.

Corpsegrinder was our recent guest on The MetalSucks Podcast to discuss the new album, amongst other topics, and he jokingly called himself “a stubborn old jerk” because he refuses to pay for streaming music services.