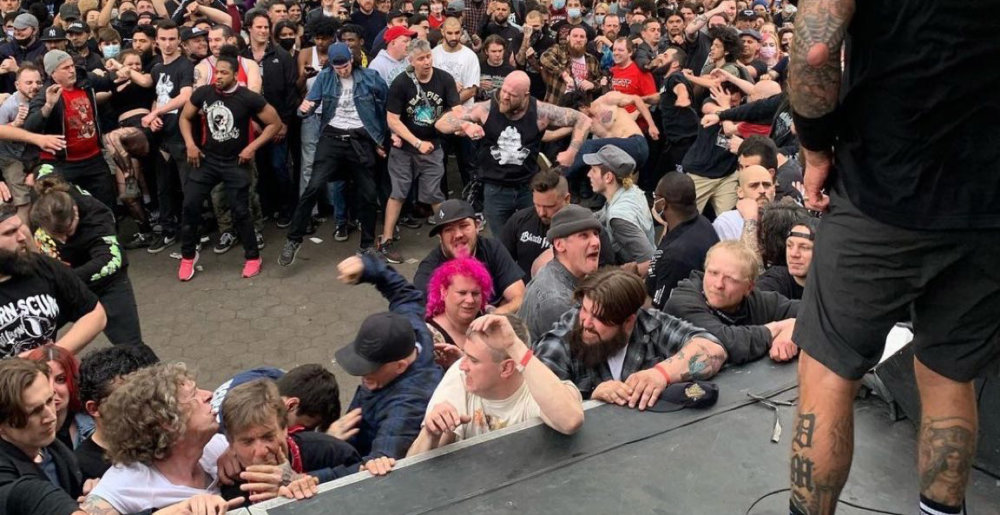 On Saturday, April 24, several hardcore bands performed in New York City’s Tompkins Square Park to an audience reported to be between 2,000 and 3,000 people, likely the largest concert to take place in the city since early March of 2020. Photos and videos of the show, which featured Madball, Murphy’s Law, Bloodclot and The Captures, have been circulating online and show many attendees openly flouting Covid-19 safety regulations by ignoring social distancing and masking mandates as they mosh up front, sparking an outcry throughout NYC and the heavy music community as a whole.

The NYC Parks Department, which had jurisdiction over the event, said yesterday they are investigating the matter, and later revealed to local news station PIX11 that the event’s organizers submitted a misleading application to obtain their permit to host the event on city property.

New York City Department of Parks & Recreation requires applications to be submitted and vetted before organizers are granted permits to host events in public parks. A representative from the department told PIX11 that the permit holder, identified as Chris Parker, misrepresented the event on his application, presenting it as a “September 11 Memorial” featuring a “political rally with music and speakers,” expected to attract roughly 100 people.

PIX11’s email request for a statement from Parker was returned as undeliverable and the phone number listed on the permit was not in service, according to the station. However, the company behind the concert, Black N’ Blue Productions, issued a statement on its Instagram claiming that the permit makes no reference to a 9/11 memorial, saying “the media lies almost all the time,” although they don’t address any language that may have been included on the application filed to obtain the permit.

The show was a benefit for the New York City Firefighters Burn Foundation, and while admission was free, attendees were encouraged to donate. The campaign has raised $6,705 as of press time.

“I’m sure most people know the media lies almost all the time. But just for shits and giggles the permit says nothing about 911 Memorial on it!! I have the permit in my hand. Fucking asshats . Had look at it again to make sure but there’s nothing on it that says 911 Memorial . Get pix 11 to post it since people suck the dick of the media these days obviously. Permit that we received says nothing of any sort. Cmon you fools … you took that and Swallowed it pretty quick. Sadly not surprised. We see you”

Adding more fuel to the fire, ex-SSD frontman David “Springa” Spring, drew ire for wearing a “BLACK FLAG MATTERS” shirt while on stage with Murphy’s Law, striking many as tone deaf in the wake of the recent Derek Chauvin ruling and ongoing violence against Black Americans by police.

New York State law currently allows for outdoor venues to operate at 20% capacity — and a maximum of 500 people — with mandatory masking and social distancing. Those requirements were openly ignored at the park, which does not have a gated entryway during operating hours and does not have adequate parks staff to surveil a large event, as hundreds of maskless folks can be seen moshing in front of the stage.

You can read the full PIX11 report here. Thanks to Metal Riot for the tip.