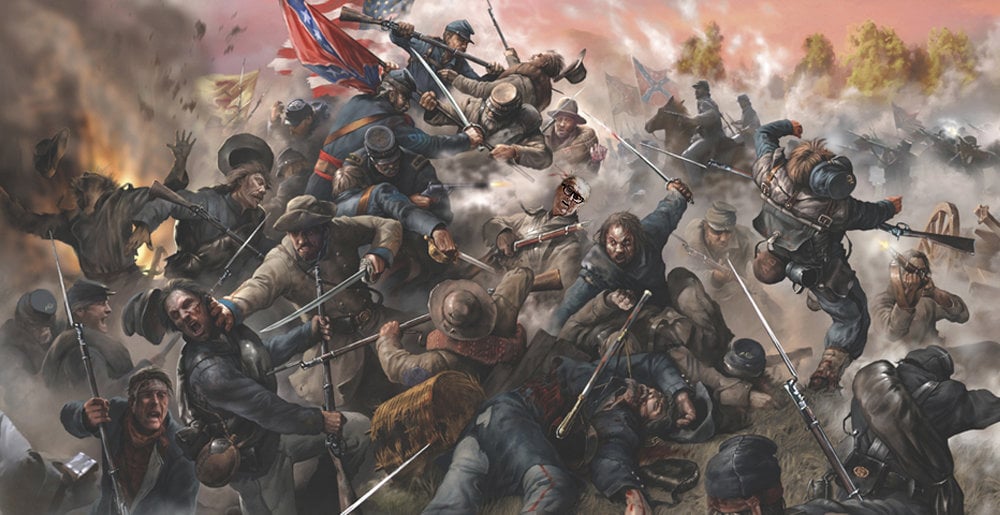 My manager’s assistant called to say I had an offer to produce the new Iced Earth album. I’d never heard of Iced Earth. The kid said, “They’re the band with the singer from Judas Priest.” I thought he meant Halford. I didn’t realize the mistake until I’d already signed the contract. Needless to say, that kid never worked in this business again.

The band’s leader turned out to be this guitar player named Jon Schaffer. I went to the studio to meet him for the first time. He was late. When I asked him why he was late, he pointed out the window at a passing taxi cab and shouted “IT WAS HIM! HE DID IT!”

Schaffer said he wanted the album to be called The Glorious Burden and be all about military history. I objected to his use of the word “glorious.” He stood firm.

“You ever serve?” I asked him.

“No,” I replied, “but I did produce a couple of USO shows during ‘Nam. I’m telling you, saying anything about war is ‘glorious’ isn’t cool.”

Schaffer pulled a can bear spray on me and said “We’re calling this album The Glorious Burden.” I saluted and said “Aye aye captain.”

Schaffer wanted to open the album with the band playing “The Star-Spangled Banner.” I told him we shouldn’t do that.

“It’s a cliché, and you’ll never do it as good as Hendrix,” I argued. “Also, you have songs about Attila the Hun, Waterloo, and World War I.”

“So, I’m not sure if you know this, but Attila the Hun was Hungarian, Waterloo is in Belgium, and World War I was fought in Europe with soldiers from a lot of different countries.”

I didn’t have a good counter-argument for that line of reasoning.

“Alright, well if you insist on playing it here, let’s not play it again at the beginning of ‘Devil to Pay.’”

“Because you played it already.”

“You should only play it once.”

“Why? DO YOU HATE AMERICA?” he shouted, a can of bear spray magically appearing in his hand.

“Never mind. Is there a third place we can work it in somewhere?”

I was relieved when Richard Christy showed up to record drums. At least there was one goddamn professional working on this thing besides me. Although it was annoying that whenever he made an error, however slight, Schaffer would leap out of his chair, point at the drummer, and shout “IT WAS HIM! HE DID IT!” Still, working with Christy was a relative pleasure, and I was sad when he finished his parts.

I forget the name of the bassist. I never really got to work with him anyway. He got kicked out of the studio after Schaffer realized he was using an Ibanez. “There won’t be no goddamn [racial slur deleted]-made instruments on my album!” Schaffer declared. “I’ll record the parts on my ESP!”

Schaffer looked confused. “I didn’t know,” he whimpered. Then he leapt up out of his chair, pointed at his guitar tech, and shouted “IT WAS HIM! HE DID IT!”

Schaffer had chops, I’ll give him that. He didn’t like it the one time I made a suggestion about one of his solos — “Never mind!” I told him as soon as I saw him reaching for bear spray — but his work was good enough that it didn’t really matter.

Unfortunately, when Schaffer was done, I had to record Halfauxrd’s vocals. If you think they call him “Ripper” because he doesn’t have chronic flatulence, guess again. Making it worse was the fact that every time Ripper passed gas, Schaffer leapt out of his seat, pointed at Ripper, and shouted “IT WAS HIM! HE DID IT!” I gave Ripper as few notes as possible because I didn’t want to suffocate to death in a cloud of effluvium while listening to some idiot try to rat on a guy who I imagine must have pretty serious health issues.

The Glorious Burden came out and spent one week on the Billboard 200, at position #145. I’m told fans like it, but the royalties it paid me wouldn’t cover the cost of my socks.

When I found out my manager’s assistant had a brother who was a music teacher, I made a big donation to his school and had him fired.

Metal Sucks Greatest Hits
2510 -
Rose Funeral: The Uno Incident?
9660 -
…And F**k You, Too.
0 -
The 110% Totally True Confessions of a Left-Wing Conspirator
0 -
50 Metal and Hard Rock Musicians’ Yearbook Photos
0 -
L.A. Band Threatin Faked a Fanbase To Land a European Tour No One Attended
0 -
That Time Shaun Got Drunk and Filmed a Music Video with His Cat