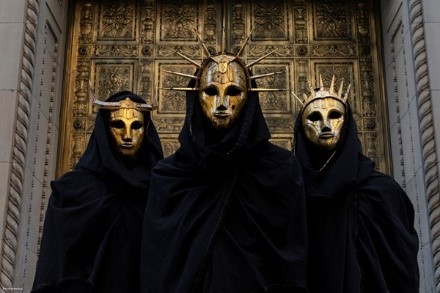 Imperial Triumphant have announced a fall headline tour. Support will come from Pyrrhon.

This will be, if I’m not mistaken, the New York avant-garde metallers’ first tour since the release of their most recent album, Alphaville, which came out on July 31 of last year.

They were supposed to be part of the MetalSucks-sponsored Devastation on the Nation trek, but that got called off because of you-know-what.

Here are the new Imperial Triumphant dates (courtesy of Lambgoat):

Metal Sucks Greatest Hits
1510 -
The Top 15 Reasons that Metallica are the Yankees of Metal
0 -
Today in Dream Theater Shirts: Metalhead Veterinarian Fired for Bestial*ty
0 -
Website Photoshops Dogs in Place of Bass Guitars Because Why Not?
0 -
Someone Made a Lemmy Doll from a Mr. Potatohead
0 -
Ten Reasons Why Record Labels Are Still Important
0 -
Editorial: The Metal Community Must Stop Letting Phil Anselmo Off the Hook for His Racist Remarks