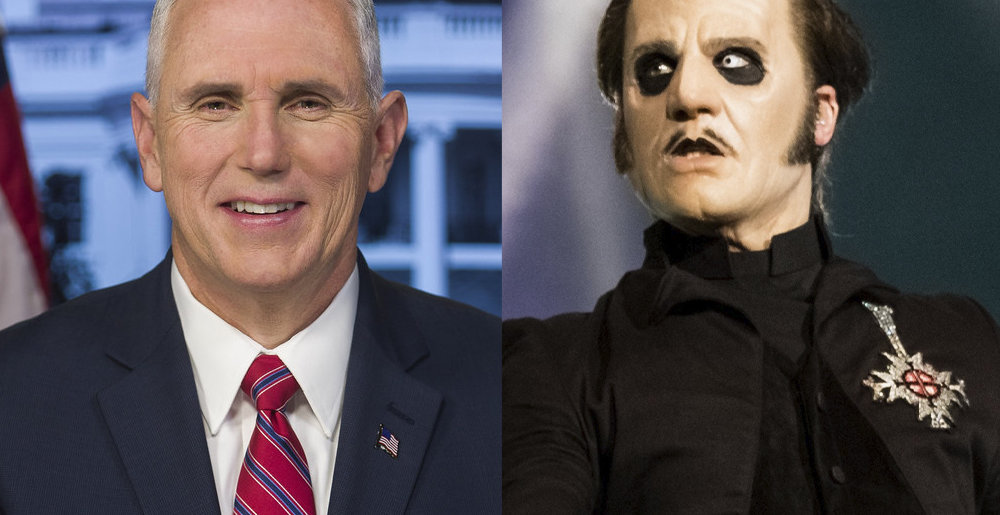 BUMMER ALERT: It looks like that big Ghost/Kid Rock co-headline tour you’ve always dreamt of is never gonna happen. I know, I know. All you’ve ever wanted in life was to see “Cirice” and “Bawitdaba” performed on one bill. That’s really all any of us have wanted in life, is it not?

“That song’s about [Pence] and anyone like him who’s willing to soil everything they’ve worked for. They definitely qualify for a front-row ticket to Hell. Which is so ironic, because that’s what they believe in. [People like that] completely demean themselves, and just eat shit out of someone’s ass in order to achieve whatever they’re trying to achieve.

“Again, he stands as a symbol for people of all times, where the end game is wrapped with some sort of religious [thing]. He’s known as this sort of Bible thumper, believing that he has strong faith, and he’s just this awful, awful person in any way. He tries to tell the world that he serves God, that he’s part of the good side. Whereas at the end of the day, the only thing he wants is power. But it doesn’t have to necessarily be all about him. It’s about people like him: a lot of politicians, lot of preachers, a lot of clergymen throughout the history of time.”

Yeah yeah yeah, lotsa hypocrites throughout history. But first and foremost, it was inspired by Pence. Which means now we know what to play at the fucker’s funeral. Thanks, Ghost!

Kid Rock did not respond to requests for comment.

Impera is out March 11. Ghost debuted a new song, “Kaisarion,” earlier this week. They’re on tour with Volbeat now. Remaining dates are…

Metal Sucks Greatest Hits
0 -
Debunking the Myth that Guitar Hero Made Dragonforce
300 -
Sebastian Bach: The MetalSucks Interview
0 -
Exclusive Interview: John Baizley of Baroness on the Bus Crash, Recovery and the Future
0 -
Rigged: Luke Hoskin of Protest The Hero
0 -
Editorial: Slayer Should Become Professional Songwriters
560 -
The Austerity Program’s Justin Foley Wonders: Is It Okay to Listen to Music Made by People Who You Think Are Bad Folks?