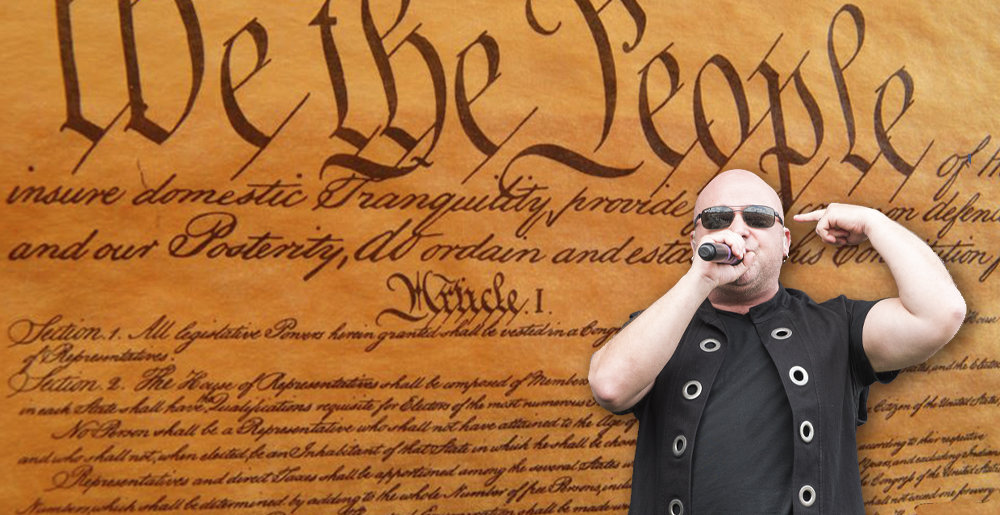 David Draiman Latest Musician to Not Understand the First Amendment

I can’t fucking believe we have to keep going over this, but one more time, for the cheap seats, here is the First Amendment to the United States Constitution:

“Congress shall make no law respecting an establishment of religion, or prohibiting the free exercise thereof; or abridging the freedom of speech, or of the press; or the right of the people peaceably to assemble, and to petition the Government for a redress of grievances.”

One key word in the there that a too-substantial portion of the population always seems to miss is “congress.” In other words, THE GOVERNMENT WON’T LIMIT YOUR SPEECH. Unlike in, say, North Korea, where saying “Fuck the government” will have serious consequences, the United States government — theoretically the highest authority in the land — will allow its citizens to voice dissent.

It just says the government won’t toss you in prison for saying they suck.

Okay? We all clear on that finally? You sure? Wanna go back and re-read it a few times to be safe? I really don’t wanna have to keep bringing this up.

Alright alright alright. So assuming that you do, indeed, now actually understand what the First Amendment says, keep its actual meaning in mind when reading Draiman’s response to the news that Spotify will honor Neil Young’s wishes and remove his music from their service at least until they end their business dealings with former Fear Factor host Joe Rogan.

“@eldsjal I applaud you and @Spotify for making the RIGHT call, preserving #FreeSpeech and not capitulating to the mob. I may not agree with everything @joerogan or his guests say, but they’re entitled to have the forum to say it.”

What really happened is this: Joe Rogan is an idiot. Neil Young protested Rogan’s idiocy by telling Spotify they couldn’t profit from both himself and the podcast host. Someone at Spotify crunched some numbers and figured out Rogan was worth more to them than Young financially. That’s it. End of story.

And look, I’m not even saying Joe Rogan should be kicked off Spotify — I can see both sides of the argument. I mean, on the one hand, I think if you’re dumb enough to take medical advice from a dude who has been in multiple Kevin James movies, that’s on you. On the other hand, as Sebastian Bach put it, “Misinformation about the vaccines is everybody’s problem.” Risking your own life is one thing, but Rogan and his acolytes may be spreading COVID all over the damn place, including to those who are medically unable to get vaccinated and/or are immunocompromised. In other words, they’re a public health risk, and maybe the forum to speak their minds doesn’t have to be the world’s most popular streaming service for audio content.

What I’m saying is, let’s call a spade a spade. Spotify are not preserving free speech. Nor is it Spotify’s intent to preserve free speech. I may not like Draiman’s music, but he generally seems like a fairly smart dude, and it’s honestly kinda weird to see him so wildly miss the mark.

Or, as this dude put it:

Metal Sucks Greatest Hits
0 -
Metal Musicians Reacts to Maroon 5’s Lame Super Bowl LIII Halftime Show
0 -
Will People Please Shut Up About the “Fake Amps on Stage” Debate?
0 -
What is the best subgenre of metal?? *please read*
0 -
The Top Ten YARLERS of All Time
0 -
And Now, Here’s a Couple of Dudes Playing Slayer on Pre-School Instruments
0 -
The formula 4 good music: Generic, but with a gimmick (*please read*)