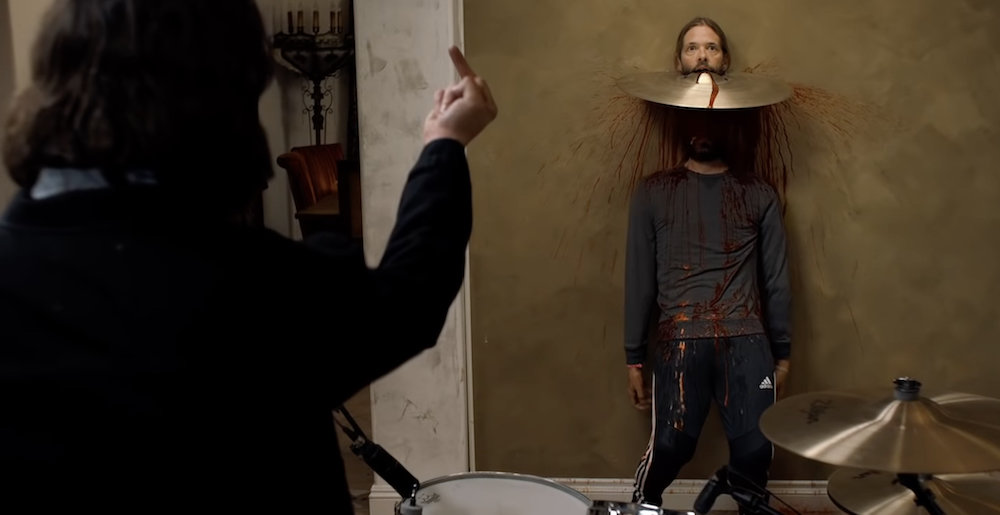 So far, what we’ve seen of Foo Fighters‘ Studio 666 has proven that it’s more metal than we thought it’d be. Not only does the movie include a cameo from Slayer’s Kerry King, it also features an entire album of killer blackened thrash written by Dave Grohl himself. Now, the uncensored red-band trailer for Studio 666 has been released, and if you want blood, you’ve got it. In abundance.

The red band trailer for Studio 666 doesn’t really reveal much more about the film than that original trailer did; in fact, the plot’s in slightly short supply here. What it offers fans instead is a whole lot of brutal violence and gore, including but not limited to:

For those of you wondering what the movie’s about, here’s Dave Grohl in a recent interview:

“The premise of the movie is that we move into this house, I have writer’s block, I’m totally uninspired, I can’t come up with anything. And I wind up finding this creepy basement. And I go into the basement, I find this tape by a band from 25 years ago that recorded there. And there’s this song that, if recorded and completed, the fucking demon in the house is unleashed, and then, whatever, all hell breaks loose.”

Check out the red band trailer for Studio 666 below. Studio 666 was directed by BJ McDonnell (Hatchet III) and written by Jeff Buhler (the 2019 version of Pet Sematary) and Rebecca Hughes. In addition to the band, the cast includes Will Forte (MacGruber), Whitney Cummings (The Female Brain), Jeff Garlin (Curb Your Enthusiasm), and Jenna Ortega (the new Scream), and comes out February 25th.