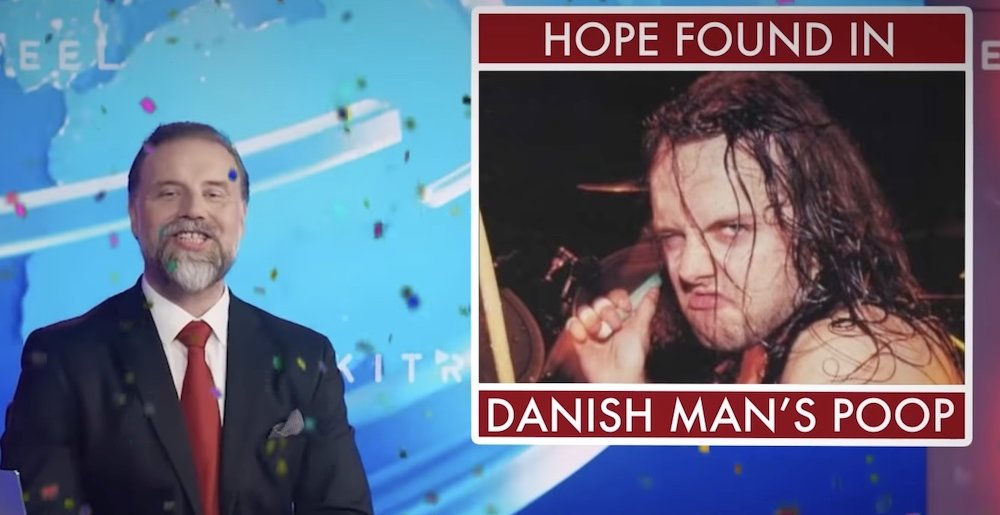 Video: Only A Rocket Full of Lars Ulrich’s Deuce Can Save Earth From a Giant Asteroid

The fear of a giant meteor hitting earth and killing us all is one that mankind has entertained since we realized that that’s what probably murdered all the dinosaurs. Several films and a ton of what-if scenarios have posited the effects of a giant hunk of space rock slamming into the earth, with only Bruce Willis and the guy banging his daughter to stop it. Now, a new YouTube video has posited a similar extinction level event, but come up with an astounding solution: shooting the asteroid in question with a rock packed to the bring with Lars Ulrich‘s poop.

The video comes from 66Samus, the musical genius who made us think about how drummer knock on doors and how AC/DC would sound if drummed with dildos. This time around, the YouTube artiste has created a video for his track “22” by positing an alternate history in which a meteor is on course to destroy earth, with only a massive amount of Metallica drummer Lars Ulrich’s feces to stop it. Can Lars’ leavings stop the meteor? Is humanity doomed to die a painful death by nuclear winter, or doomed to be bathed in a rocket’s worth of human shit? Today, we find out.

Watch this video and ask, “WHY?” below:

Metal Sucks Greatest Hits
0 -
I Am The Working Class: The MetalSucks Interview with Fenriz
820 -
Rigged: Dream Theater’s Mike Mangini Takes You Through Every Piece of His Mega-Drumkit [Part 1]
0 -
Metal Musicians Reacts to Maroon 5’s Lame Super Bowl LIII Halftime Show
560 -
The Austerity Program’s Justin Foley Wonders: Is It Okay to Listen to Music Made by People Who You Think Are Bad Folks?
0 -
Video: Killswitch Engage’s Adam Dutkiewicz Wins Everything on The Price is Right
750 -
Anthrax vs. Axl vs. Anso: The Worship Music Double Review