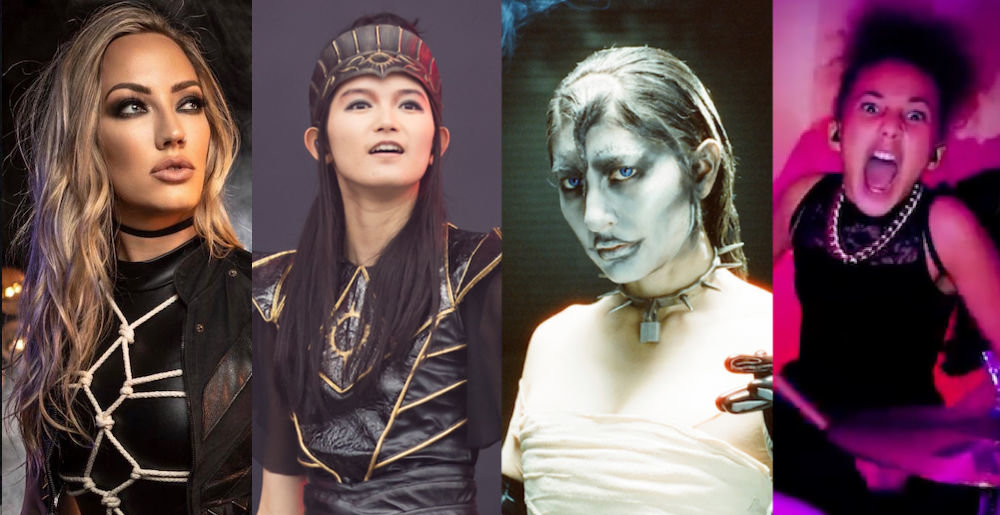 The future of metal is a lot of things, but female is definitely one of them. As metal expands as a genre, the old stereotype that it’s a boy’s club is quickly diminishing, as more and more women become important figureheads within the international scene. From artists ruling the stage to coaches training those artists to authors expressing new voices in the growing world of extreme music, these women have made so many of us realize that to limit metal by gender is unfair to the genre, and to ourselves.

Since today is International Women’s Day, we wanted to pay homage to women in the genre who have changed its landscape. But so many of these lists include the same accolades and anecdotes we’ve read before. So this time around, we decided to make this a list of women who have been changing metal as we know it in the last two decades.

In 2022, being a female death metal vocalist is no longer novel, but being one as vicious-sounding and forward-thinking as Larissa Stupar will always turn heads. Venom Prison’s vocalist sounds like she might grow a spike out of her hand and impale you on it at a moment’s notice, to be sure. But in interviews, she give fans insight into a metalhead who’s actively standing against bigotry and the demonization of motherhood, and who is inviting a generation focused on doing the same to enjoy a genre of music that in the past hasn’t felt like it was ‘for them.’ Watching her continued sonic progression is a pleasure, even as she peels layers of skin off of our eardrums.

It’s no exaggeration to say that Angela Gossow forever altered the course of metal. Not only did the vocalist help make Arch Enemy one of the scene’s most exciting bands, but she also paved the way for female vocals in extreme metal, a concept that had been broached but which was suddenly being fully realized. Angela also made public the idea that to do so didn’t necessarily mean stepping outside of gender or being one of the guys – Gossow was female, friendly, ferocious onstage, and above all a fan. Her influence on the genre is one that cannot be overstated.

In a 2008 article in Decibel, Cretin vocalist/guitarist Marissa Martinez-Hoadley introduced the world of metal to a concept it hadn’t fully considered: a trans death metal star. For many, this author included, the profile began a conversation about gender that metal needed to have, and which it has continued having ever since. And while Marissa didn’t need to be an absolutely badass metal musician to make her story relevant, the fact that she’s so talented and respected made many armchair gender experts reconsider their stances. To this day, she is someone who ushered the scene to a place where it needed to go, whether it was ready or not.

Besides being a great writer and dedicated journalist, Laina Dawes also opened the eyes of countless metalheads. With her book What Are You Doing Here?, Dawes described her experience as a black woman in the metal scene, and in doing so made it part of the metalhead experience at large. Suddenly, many of us were seeing differently – seeing how certain art could affect or disillusion certain people, seeing how certain undercurrents within the scene’s attitude were alienating those whose voices we hadn’t fully considered yet. Laina’s book did what the best metal does: it made us stop and look at the world with our eyes a little more open.

Real talk: we did not think that Battle Beast would be such a draw for this long. The Finnish power metallers have been impressively prolific and tenacious, building a strong career in a genre that many think of as old hat. A huge part of that is singer Noora Louhimo, whose unique mixture of soaring and snarled vocals, alongside with her magnetic stage presence, has made her one of modern metal’s must-see personalities. Extreme underground fans may roll their eyes, but witness this band onstage and try not to nod along, impressed as hell.

Much like her music, Chelsea Wolfe’s influence on metal is a dark and nebulous cloud, seemingly distant until you find yourself engulfed by it. Wolfe isn’t a major actor in the metal underground so much as a stage manager, moving the props and aesthetics around her effortlessly. Her use of haunting vocals, eerie soundscapes, and Walpurgisnacht-friendly art has helped bring an earthy sort of witchcraft back into the genre. That she teamed up with Converge last year to release the utterly devastating Bloodmoon: I only further cements how powerful her input can be on even established titans of the genre.

Changing the way the world looks at rock music, drumming, social media, and what girls are capable of is impressive – even when you’re NOT doing it at 11 years old. But in a few short years, Nandi Bushell has taken over the planet with her drumming, to the point where dudes like Dave Grohl are in awe of her. Given how often older people lament that rock is dead and kids today only care about being DJs or emo rappers, seeing a young woman of color thrashing a drum kit with a grin on her face is a reminder that they don’t know jack. Nandi, you rule. We believe in you.

This is the second list on which we’ve applauded Melissa Cross; she was also featured prominently in our round-up of behind-the-scenes people who defined metal as we know it. And this is because Melissa’s hard work has been so influential on the modern metal scene that she deserves all the praise we can heap on her. As a vocal coach, Melissa has given everyone from Dani Filth to David Draiman the training they’ve needed to keep their vocal cords healthy, long-lasting, and utterly brutal. Every time you watch a modern screamer wow a room full of fans without spitting blood, you probably have Melissa to thank for it.

You’d be hard-pressed to find another performer with the same crackling energy of Wargasm’s Milkie Way. In all the band’s videos, in all their live footage, Milkie is like a bolt of lightning playing churning metal-punk. Meanwhile, when the 2021 Heavy Music Awards’ Twitch stream got shut down because she wore a top that dared to reveal her nipple, did Milkie apologize? Nope, she called out Twitch for portraying a woman’s body as something tawdry and inappropriate, tweeting, “Police your expectations, not women’s bodies.” A voice for a new generation of heavy music fans who are, simply put, not here for your outdated bullshit.

Fucking try to deny it. Do your best, with your Who?  and Not real metal and all the other tired, boring ways of acting like you’re above this band. But the fact that BABYMETAL have made so many ultra-true metalheads SO angry just proves that they’re doing something right. Meanwhile, their high-octane, all-in hyper-metal has inspired a legion of metal-agnostic people to turn their interest towards music that’s loud, fast, and crushingly overwhelming. How this legion of fans will grow and find their way in the ever-changing world of metal, we’re excited to see, but for now, we salute these three women for their work. We’ll fox with this music any time.

At every turn, Jessica Pimentel defies expectations and raises the bar for everyone around her. She’s the vocalist for the crushing Alekhine’s Gun, so she must be furious and antisocial, right? Oh wait, actually she’s a Buddhist with a storied acting career, having become a favorite on the TV series Orange Is The New Black. Okay, so she probably has a big head about herself, right? Nope, Jess is one of the nicest and most thoughtful people you’ll ever meet. So she’s just a diehard metalhead, right? Except here’s her playing violin like a pro. The truth is that Jess Pimentel is the mirror in which we all see that we can do better. That she’d never say such a thing herself only speaks to why that’s the case.

For many years, Kris Esfandiari has worked within metal and hardcore’s underground, but last year was when so many of us finally began to recognize her art for its incredible genius. Celestial Blues, the record she released as King Woman, was a breathtaking mixture of sludge, doom, and hardcore, with its introspection and occultism beautifully intertwined. The album was a reminder of what heavy music can be, and how it will continue to grow if we give it the room to do so, and if we support the artists who push it forward. King Woman indeed.

So, Nita Strauss is the lead guitarist for Alice Cooper, one of metal’s most legendary figures, whose live show is something between an obstacle course and a haunted house. Oh wait, she’s also an incredibly successful solo artist as a guitarist. Oh wait, she also set new records for a female solo artist with her new song featuring Disturbed’s David Draiman, “Dead Inside.” Do we need to keep going? Every time it looks like Nita has reached the peak of her ability and renown, she finds a new mountain to climb, and shows the world what’s possible for any and all of us. There’s a reason her social media handles describe her as a hurricane.

There’s a reason that every major news outlet in the world turns to Kim Kelly when trying to understand metal. It’s because as a journalist and activist, Kim has always regarded the scene with unflinching thought and insight, holding both the roiling underground and the mainstream under the same magnifying glass. Now hard at work preparing for the release of her book about the history of American labor, Kim remains one of the most controversial and knowledgable people within metal at large, and represents how far constant hard work, tons of heart, and an inability to back down can take people. Of course, she’s written for MetalSucks in the past, but hey, nobody’s perfect.

Metal Sucks Greatest Hits
2060 -
How Metal Nerds Choose What Bands To Like: A Scientific Model
0 -
Converse Rubber Tracks x MetalSucks: Everything All in One Place
0 -
Editorial: Your Dead Metal Heroes Were No Angels
0 -
Rigged: Testament Guitarist Alex Skolnick
0 -
David Lee Roth on Van Halen Brothers: “We Have Always Hated Each Other”
0 -
Scientific Proof That Djent is a Genre