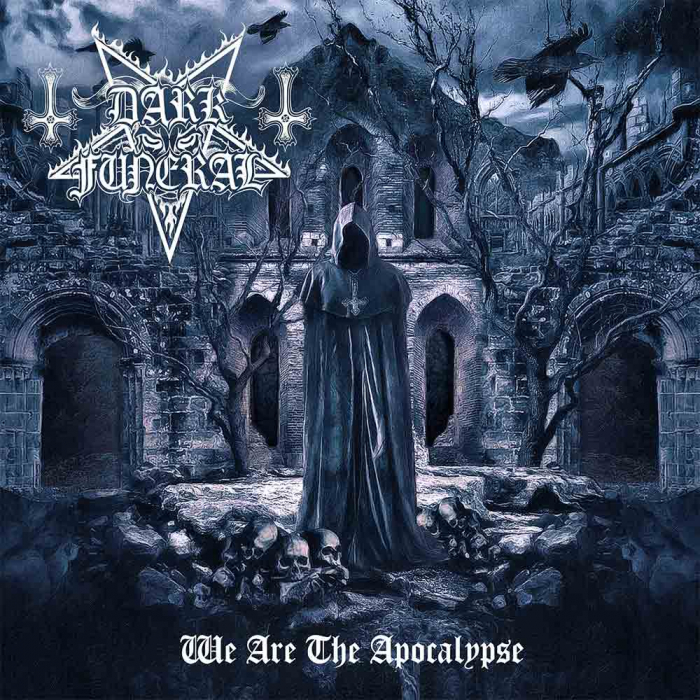 Review: Dark Funeral Bring a Very Welcome End of the World with We Are The Apocalypse

There’s something to be said about consistency in music. Putting out seven full-length records in 28 years without a single one sucking is a difficult task, but one that Dark Funeral can add to their incredibly studded belts. We Are The Apocalypse marks the band’s first record with bassist Frederik Isaksson (Adra-Melek) and drummer Janne Jaloma (Jalomaah), the latter of whom has some colossal shoes to fill after the departure of Nils Fjellström. But both “newcomers,” who have been in the band since 2018, are more than up to the task. And Dark Funeral are nothing if not consistent.

If you’ve ever heard a Dark Funeral album, then chances are you probably know what to expect already: burning churches, pentagrams, ritual sacrifice and an industrial amount of Satan. It’s a formula they have perfected over the years. When compared to their last, and also excellent, album Where Shadows Forever Reign, they’ve kept the game plan largely the same — but with just a few differences.

First is that with Apocalypse, the riffs are not as driven by tremolo picking as they are in Dark Funeral’s past work. Band leader Lord Ahriman didn’t have to reach quite so deep into his seemingly infinite bag of tremolo riffs this time around, and the album as a whole is better for it. But the biggest difference between Apocalypse and Shadows is that Apocalypse gives you a lot more room to breathe than Shadows did, In fact several songs, most notably “When I’m Gone,” slow things down considerably to offer a bit of a break before diving right back into the regularly scheduled hellfire and blastbeats in “Beyond the Grave.” Although this idea was certainly there in their past record, it has been implemented much better this time around. If Shadows was Dark Funeral’s first time driving stick, then Apocalypse is their them having owned the car for a year. The way they crank the throttle up and down ensures that you never get bored or burnt out with the unstoppable onslaught of evil that you’re mainlining into your ears. And don’t think even for a second that rolling slower means they’ve sacrificed brutality.

However, the album’s high points also come with imperfections. Any fan of Dark Funeral knows that they found their niche long ago and have continued to excel at it for years. But with that comes a bit of stagnancy, in that Dark Funeral don’t really do a lot musically other than just, well, Satan. With any intensely satanic music (not just black metal), there comes an inherit cheesiness with taking it seriously, because let’s face it, as much as we metalheads love being edgelords for Satan, the dude doesn’t exist. If you’re not down to accept at least a certain level of ridiculousness in your metal, there probably isn’t a single part of Dark Funeral’s discography that you’re going to like.

The other main knock is that, like all other Dark Funeral music, they never really push the envelope or try anything that new. Sure, not every band has to take risks and reinvent the proverbial wheel of their own subgenre, but there are bands whose sound has changed so little over the years that when an album is announced, you already know what it’s going to sound like. Yes, Dark Funeral are one of those bands, but it’s also pretty easy to overlook any homogeny/cheese because they’re just so fucking good.

All that said, how are the actual songs? We Are The Apocalypse starts out with “Nightfall,” which is your standard Dark Funeral track comprised of frosty tremolos and infernal harmonies, and transitions effortlessly into the creepy and masterfully sinister “Let the Devil In,” which is arguably the best track on the record. The respite is brief however, as We Are The Apocalypse takes you straight back to the blastbeats, and establishes that perfect pattern of peak-and-valley tempo changes between songs before reaching its grand apex and title track, “We Are The Apocalypse.”

We Are The Apocalypse drops March 18 via Century Media/Sony. You can listen to “Let The Devil In” below and preorder here.

Bringing some serious muscle on their North American tour.

Metal Sucks Greatest Hits
0 -
Editorial: The Metal Community Must Stop Letting Phil Anselmo Off the Hook for His Racist Remarks
0 -
It’s Official: There is Too Much Slayer Merchandise
0 -
Chris Brown Thinks Municipal Waste are a Fashion Statement
0 -
Rigged: Luke Hoskin of Protest The Hero
0 -
Exclusive Interview: John Baizley of Baroness on the Bus Crash, Recovery and the Future
0 -
Comedian Rob Delaney’s Open Letter to High on Fire’s Matt Pike