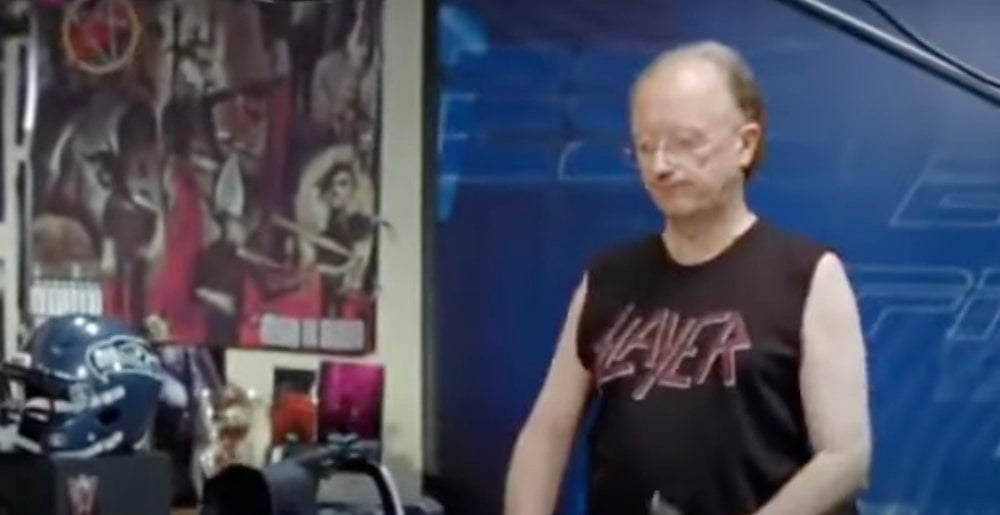 Sad news for the sports and metal world today, as John Clayton, the NFL reporter for ESPN who once portrayed a rabid Slayer fan in a SportsCenter commercial, has died. He was 67 years old.

According to Consequence of Sound, Clayton died Friday, March 18th, while surrounded by family in Washington state. No cause of death has been revealed.

While his career as a reporter and commentator was long and storied, Clayton might be best known to metal fans for the SportsCenter commercial in which he finished his segment, let down his long hair, and revealed that he was actually wearing a Slayer shirt. He then listened to thrash metal on his bed while shouting out into his house, “HEY, MOM, I”M DONE WITH MY SEGMENT!”

Apparently, in 2014, Clayton said that he got to meet the guys from Slayer, saying the following in an interview that you can watch below:

“The great part was Slayer was in town in Seattle … and I got a chance to go down and see the guys … one guy’s a Raider fan, one guy’s a 49er fan … and [guitarist] Kerry [King’s] wife took good care us so I can watch the concert. It was great. They are great people, great musicians, a great group.”

Everyone at MetalSucks sends their heart out to Clayton’s family, friends, coworkers and fans during this difficult time.

Metal Sucks Greatest Hits
0 -
Scientific Proof That Djent is a Genre
220 -
Hey Guys, Did You Know That Virgin Steele are From Long Island?
0 -
Someone Made a Lemmy Doll from a Mr. Potatohead
0 -
Video: Dudes Rockin’ Out to Van Halen Meet David Lee Roth, Have No Idea Who He Is
0 -
Anthrax’s Frank Bello is Really Excited to Be Here, Not at All Concerned About Swallowing Bugs
0 -
So As it Turns Out, Banging Your Head a Bunch Can Be Bad for Your Brain